A total of 254 runs in nine innings at 28.22, doesn’t speak volumes of Rahul’s class. What’s lacking is consistency.

Having multiple options is a good problem for any side and India have tried as many as four openers in the ongoing Test series. What has been common is KL Rahul, who has featured in all the Tests in this series.  Had injuries not played a role, it would have been Shikhar Dhawan and Murali Vijay starting but as the game goes, one’s misfortune opens the door for another. [Also Read: KL Rahul trends on Twitter; fans troll him for his inconsistency with the bat]

Much of a team’s success in Test cricket depend on its openers and the side who have had the best of them, have gone onto dominate this format. One of the major reasons for India’s rise in the 2000s was the emergence of Virender Sehwag as an opener. There’s hardly been someone as impactful as him at the top and with him not around, India are looking to fill the vacuum. [Poll: Which pair should open regularly for India in Test cricket?]

Rahul played a role in spoiling Kumar Sangakkara’s farewell party at the end of the second Test at the P Sara Oval in Colombo earlier this week. Rahul’s hundred in the first innings of the Test set-up the Indian win and quite rightly, he was awarded the man-of-the-match. Two hundreds in nine innings isn’t a bad start to one’s career but what’s alarming is the six single digit scores that has come along.

A total of 254 runs in nine innings at 28.22, doesn’t speak volumes of Rahul’s class. What’s lacking is consistency. On his debut at Melbourne Cricket Ground (MCG) last year, he played a very irresponsible shot to get out. He was just required to stay at the wicket and feed Virat Kohli with the bulk of the strike.

In Sydney again, in the Test that followed he stroked an artistic hundred, 110 to be precise, the Bangalore lad spent 356 minutes at the wicket showing that temperament is there.  The youngster exhibited a lot of panache in that knock on a quick wicket with the Mitchell Starc at your face.

At Galle, he was trusted with a lot of responsibility but he failed to deliver managing popper single digit scores. That is the time critics again started weighing him against Vijay and Dhawan. He bounced back from the failure to slam a ton at Colombo. Rahul’s 108 scripted the Indian win and he showed mastery in handling Rangana Herath and the other bowlers. [Also Read: Run-machine KL Rahul continues to inspire confidence]

Talent is never a question and that has given him the opportunities. On Friday, the first day of the third Test at SSC, Colombo, Rahul again was dismissed cheaply for just two. Despite his two exquisite hundreds at the top level, his average is just ordinary.

The team management does believe in him and he will get more chances but with the competition for places getting tighter, Rahul is expected to raise the bar and provide solid starts more often. For now, his innings sequence since debut reads — 3, 1, 110, 16, 7, 5, 108, 2 and 2. 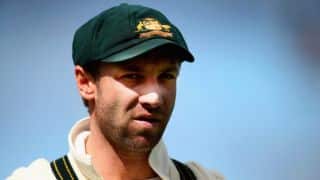 Phillip Hughes’ death: Inquest to be held 9 months after the cricketer’s sad demise