A victory is exhilarating regardless of the manner in which it comes. India’s win over Sri Lanka on Wednesday wasn’t really flawless, but it will certainly boost the morale of the Indian. 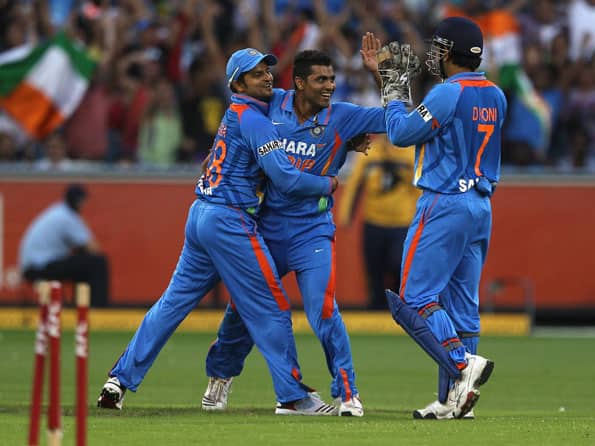 Suresh Raina (left), Ravindra Jadeja (centre) and MS Dhoni celebrate the run out of George Bailey of Australia in the International Twenty20 match between Australia and India at the Melbourne Cricket Ground © Getty Images

A victory is exhilarating regardless of the manner in which it comes. India’s win over Sri Lanka on Wednesday wasn’t really flawless, but it will certainly boost the morale of the Indian. It was a team effort from India that enabled them to collectively overcome hurdles. The bowling department did well to restrict the Sri Lankans, who at one stage looked set to post a big. The batting unit too did well, apart from that familiar middle-order collapse. However, the approach of the Indian fielders and the way they complemented their bowlers was refreshing. Their contribution was vital to India’s success in the match.

A few days ago, in the second Twenty20 (T20), some electrifying fielding performance helped India coast to an eight-wicket victory over Australia. Ravindra Jadeja was adjudged the “Man of the Match” for his brilliance on the field which was responsible for the run outs of Aaron Finch and skipper George Bailey. He also took a catch of his own bowling to dismiss the dangerous David Hussey – the game-changing moment.

It’s not often that a player gets recognised and is awarded for his fielding. But that award definitely enhanced the value of good fielding. An inspired effort by the fielders eases the burden on both the batting and bowling departments, and this was evident in the second T20 match between India and Australia and also in Wednesday’s One-Day International (ODI) against Sri Lanka.

Virat Kohli is unarguably one of India’s best fielders. His efficiency on the field remains the same, regardless of the position in which he has been placed at. The catch he took to dismiss Tillakaratne Dilshan is praiseworthy, considering the speed at which it travelled to Kohli’s wrong side after it was ferociously cut by the batsman. This kind of intensity is heart warming. Kohli had the chance to affect a run out just a ball earlier. He was livid with himself for missing the opportunity. A good fielder is always eager and hopes for the ball to come his way again so that he can right the wrong. Kohli demonstrated exactly that when he grasped on to the immediate second chance provided by Dilshan. The way he dived near the ropes to save a boundary in the 42nd over too was magnificent. This kind of fielding elevates the mood of the entire team.

It is a common notion that fast bowlers are not great fielders. But looking at how Zaheer Khan and Vinay Kumar threw themselves at the ball when fielding in the outfield was commendable considering the fact that they did bowl a decent number of overs before that. Zaheer is known to be a tremendous bowler, but a mediocre fielder. The Australians often capitalised by converting the singles into doubles every time the ball went towards him during the Border-Gavaskar Trophy. However, he too looked a completely different fielder on Wednesday when he made a full-length diving save to prevent a certain boundary. Vinay Kumar, too, made a fantastic effort in the 46th over to keep the ball away from making it to the fence.

The Indians left no stone unturned to make life miserable for the Sri Lankan batsmen during the death overs. The message from the Indian fielders was loud and clear: Sri Lankan batsmen had to work hard for it. This was reiterated by a senior player like Virender Sehwag, fielding at short fine-leg in the last over of the innings, threw himself at the ball coming to his wrong side to prevent it from going past him. Good fielding ensured that the Sri Lankans stayed well below 250, thereby preventing them from having a psychological edge when they came out to defend the total.

In my earlier article, the importance of going in with just one spinner and three seamers at Perth was emphasised. The Indians went in with Ravichandran Ashwin and the move certainly paid off as he was awarded the “Man of the Match” for his excellent contribution with both the ball and bat. However, he needs to work on his fielding and running between the wickets. He will be an asset if he can improve in these areas and become a complete package.

A lot has been discussed on the importance of blooding youngsters and the value they can add to a side. This was demonstrated by the likes of Virat Kohli, Rohit Sharma, Ravindra Jadeja, and Suresh Raina who have been fabulous on the field. These men have inspired the entire team with their outstanding fielding. If they can continue to keep up the good work and raise the bar higher, it could augur well for India in the future as the youngsters coming in will be forced to live by the high standards set. India hasn’t been well known for its fielding in the past but that could change looking at the current lot of players.

If the Indian fielders continue to contribute in a similar fashion in the upcoming games, it will ease the burden on the batsmen and bowlers, thereby increasing the side’s chances of tasting victory. It’s important that India keep this momentum going.