Ten Doeschate has set a very good example before his team-mates.

When Ryan ten Doeschate worked Roeluf van der Merwe through the leg-side in the last over of Kolkata Knight Riders’ (KKR) innings to secure qualification into the next round, there were celebrations in the Kolkata camp. The jubilant mood in the camp had nothing to do with the result of their game against Somerset but reflected their ecstasy at qualification into the main round of the Champions League T20 (CLT20). Seldom do we see a team celebrating even when the writing is on the wall, which is why the league format where net run-rates and other factors come to play; make cricket a very interesting sport. Even when you lose, you can be through to the next round.

Kolkata may have celebrated their qualification, but their performance on Wednesday night wasn’t up to the mark and they would know that they need to work on a few areas. Their batting, in particular, hasn’t been at its best in both the games. In their first game against Auckland they collapsed after having a platform to launch an assault. Whereas, against Somerset it was a different story as their top order didn’t look comfortable and seemed too eager to push the tempo.

When KKR’s run-chase against Somerset began, it wasn’t clear whether they were going for the target or the minimum runs required for qualification. Some of the shots they played early on were senseless and resulted in more pressure. Sreevats Goswami, in particular, looked nervous and fidgety at the crease. As a result he ended up throwing his wicket. At that stage, it may have been a better idea to send either Manoj Tiwary or ten Doeschate ahead of Goswami as they have more experience of handling such situations.

Manoj Tiwary’s performance would have given him confidence but he needs to convert these starts into meaningful scores. Some of the shots he played were classy and had a sense of authority written over them. However, he needs to make more significant contributions to become an asset in the KKR middle order. The form he showed against Somerset would do him a world of good, but in the coming matches he has to strive to stay a bit longer at the crease to create a bigger impact on the game. He may be feeling more comfortable in the longer formats (where he scores heavily), but he has the ability to succeed in T20s. If he lives up to his potential in the shortest format, the KKR would have a run-machine in the middle order.

Manoj Tiwary need not look beyond his team mate ten Doeschate. The Dutchman was absolutely brilliant with the bat as he played a cool headed knock and ensured the passage of his team to the next round. He is known to be a level-headed and cool player. It is this quality that tempers his approach to batting. He may not be overly aggressive but is quick to put the bad balls away or any delivery in his zone of comfort.

Apart from Manoj Tiwary and ten Doeschate, Rajat Bhatia’s crucial cameo was the only other positive to emerge from their batting. Bhatia proved his credentials in the first game with the ball and with the bat in the second to highlight his worth as an all-rounder.

Kolkata need to work out a proper strategy for their batsmen, particularly the top order. Some of them look in a hurry to score runs and ended up throwing their wickets away. They play a brilliant shot or two but then get out in a frustrating manner. The Dutchman, ten Doeschate has set a very good example before his team-mates and they need pick the finer points from his performance. If they stay calm, then they will be a very hard side to beat. They shouldn’t try to manufacture shots but should keep the scoreboard ticking by getting the singles and doubles. But whenever the opportunity presents itself, they should go for the “full monty” – to borrow a cliché from Ravi Shastri.

At the Indian Premier League (IPL), Kolkata’s case has always been about “so near yet so far.” They seem to lose their cool in crunch situations which isn’t helping their cause. For a large part of Kolkata’s innings against Somerset it looked like the same old story would unfold. However, they managed to get across the line and would be happy that they have entered a league of champions.

But, they are yet to prove that they deserve to be there. If they are to do that, they need more consistency and team work rather than one or two batsmen doing most of the scoring. 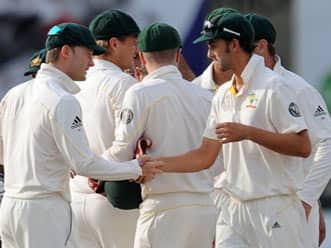