Chasing a mere 132 to win, RCB were skittled out for the lowest-ever total in IPL history, which is also the 10th lowest in the overall T20 cricket.

Royal Challengers Bangalore (RCB) were bowled out for a mere 49 in 9.4 overs, as Kolkata Knight Riders (KKR) registered a massive victory by 82 runs in the ongoing Indian Premier League (IPL) 2017 tournament. Chasing a mere 132 to win, RCB were skittled out for the lowest-ever total in IPL history, which is also the 10th lowest in the overall T20 cricket. None of the RCB batsmen could get runs in double digits, and Sunil Narine s 34 turned out to be the highest score by a batsman from either side. Let us take a look at the highlights of the RCB – KKR contest. FULL CRICKET SCORECARD: Royal Challengers Bangalore (RCB) vs Kolkata Knight Riders (KKR), IPL 10, Match 27

Virat Kohli rings the bell: The Royal Challengers Bangalore captain joined the list of dignitaries who have rung the bell at the iconic Eden Gardens before the start of play. The bell, which was installed before the India versus New Zealand Test the 250th in history for India was first rung by Kapil Dev.

Sunil Narine s blitz: Kolkata Knight Riders decided to stick with Sunil Narine as one of their openers, and would be glad at the end of the game with their decision. Narine s 34 off a mere 17 balls off which 18 came in the first over turned out to be the highest score by any KKR batsman in a wretched batting display. Narine amazed one and all when he finally took a single in this IPL, having scored 60 runs so far dealing in boundaries and sixes.

Robin Uthappa beats several men: On the first ball that he faced, Uthappa drove it straight down the ground which beat as many as three from the fielding side. The bowler was beaten first, and then the men at mid-on and mid-off, who put in their respective dives one after the other but could not get to the ball, which raced down to the boundary.

Yuzvendra Chahal rocks KKR: With a scintillating bowling display, Yuzvendra Chahal brought down KKR onto the ground. After 4 overs, Kolkata Knight Riders were flying high on confidence, having reached 52 for 1. But after the end of the 12th over, KKR were reeling at 93 for 6, with Chahal squeezing the life out of the batsmen. Chahal bowled with tremendous control, and used the googly perfectly.

RCB s poor start: With 132 needed to win, RCB would have fancied a rather easy win. However, things turned from bad to worse for the Kohli-led team in no time. Kohli himself chased one outside off to be dismissed for a first-ball duck, but the situation worsened for RCB when AB de Villiers threw away his wicket, which left RCB reeling at 12 for 3. This is where it all went wrong for the Royal Challengers Bangalore.

Captain Kohli loses cool again: The young man was seen being angry once again. Having spent a lot of time fuming on and off the field during the Australia series, Kohli was once again seen livid when he fell for a first-ball duck. However, Kohli was not entirely to be blamed as a late movement behind the sight screen distracted him, and resulted in his dismissal. Kohli threw his helmet as well as the bat when he reached the RCB dug out, and was also spotted having a conversation with one of the match officials.

It was all over in a flash: RCB were bowled out for a mere 49 in 9.4 overs, which ensured they entered the wrong books in history. RCB became the first team to be bowled out for under 5o in an IPL game. RCB faced a mere 9.4 overs in their innings, which is the least faced by any team in IPL history. The total of 49 is also the 10th lowest in overall T20 history.

KKR bowlers on fire: Literally, they were. Nathan Coulter-Nile was the most expensive of them all but he set the tone early on. He bowled a splendid spell, but ended up giving away 21 runs for his 3 wickets. However, the bowler would not be complaining as he was adjudged the Man of the Match for his effort. On the other hand, Colin de Grandhomme returned with the figures of 1.4-0-4-3, whereas Chris Woakes returned with 2-0-6-3. 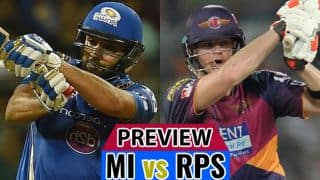 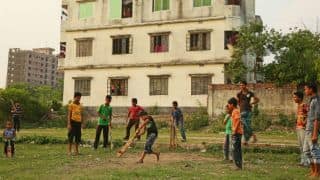