KKR managed to overcome a series of early blows to win the match by 7 wickets.

The clash between Kolkata Knight Riders (KKR) and Chennai Super Kings (CSK) at Eden Gardens, Kolkata was a night of sweet revenge for the home-side. Rishad D’Souza presents highlights from a match with plenty of ups and downs. READ: KKR demolish CSK by 7 wickets

Dwayne Smith dismissed off the first ball:  CSK have been led to fabulous starts on multiple occasions by the West Indian recruit. It wasn’t to be today as he got out off the very first ball of the innings to a Pat Cummins delivery in attempt to drive through extra cover. IPL 2015 Points Table & Team Standings

Brendon McCullum’s regulation blitz: As has been the trend for CSK, when one opener fails the other almost certainly steps up and today was no different. Brendon McCullum smashed the fast bowlers everywhere, which forced Gautam Gambhir to switch to spinners. McCullum ended with 32 off just 12 deliveries.  IPL 2015 Highest run-scorer: List of best batsmen in IPL 8

KKR spinners take control: At 64 for two from five overs, CSK looked showed no signs of relenting despite the loss of two wickets. However, the spinners turned it around for KKR with Brad Hogg dismissing McCullum in his very first delivery. In the same over he dished out another critical blow to CSK by dismissing Faf du Plessis. Piyush, then got rid of MS Dhoni in the next over, leaving CSK reeling at 72 for five. IPL 2015 Highest wicket-taker: List of best bowlers in IPL 8

Ravindra Jadeja-Dwayne Bravo stitch partnership: With five batsmen back in the hut, CSK were in big big trouble before Jadeja and Bravo stitched together a slow but steadying 57-run partnership.

Pawan Negi completes CSK revival: While Jadeja and Bravo steadied the ship, CSK needed one last burst to propel them to a defendable score and Pawan Negi delivered the goods, smashing 27 off 13 deliveries before being dismissed by Brad Hogg, who ended with four wickets. His effort saw CSK reach a respectable score of 165 for nine. IPL 2015 Most 6s and 4s: List of most dangerous batsmen in IPL 8

KKR openers start decently: On a tricky Eden Gardens track, it was vital to set up a good strong base upfront and the KKR openers – Gambhir and Robin Uthappa did just that. They put up a 33 run partnership before Gambhir was dismissed for 19 by Mohit Sharma. They would have liked to add a few more, but it was still a decent foundation. IPL 2015 most dismissals by wicketkeeper: List of best wicketkeeper in IPL 8

Robin Uthappa plays anchor: It was essential for someone to stay around through the innings and play anchor and Robin Uthappa took the mantle tonight. He played till the very end ending with an unbeaten 80. He can give some of the credit to Dhoni who missed a stumping chance when he was in his thirties. IPL 2015 Leading fielders: List of Best fielders in IPL 8

Andre Russell eases through chase: KKR looked like they would fall apart as they did in the previous match when Manish Pandey and Suryakumar Yadav were dismissed cheaply for less than five runs each. However Andre Russell ensured that was not the case. He played a sensible innings, rotating the strike and occasionally smashing the white ball round the park. As his innings progressed, he grew in confidence and he relied more on bludgeoning than rotating. Finally he got the job done with a half century at a strike rate of about 200. 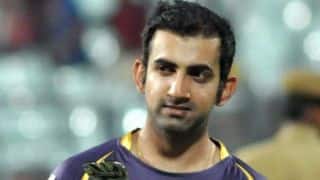