Kolkata Knight Riders (KKR) locked horns with Kings XI Punjab (KXIP) in Match 44 of the Indian Premier League (IPL) 2015. Kings XI put up a good score on board but Andre Russell and Yusuf Pathan played superb knocks to help Kolkata beat Punjab by one wicket and confirmed KKR’s place in the playoffs. Nikhil Popat brings the highlights from the game.

Buttery Knight Riders: Fielding is an important part of the game but Kolkata Knight Riders (KKR) were found wanting in this department. First, Gautam Gambhir dropped a tough chance at covers off Manan Vohra and then Brad Hogg dropped one at square leg, when Murali Vijay was trying to pull one. Vijay was dropped again on 24, when Umesh Yadav dropped a sitter. Robin Uthappa joined the list when he dropped Vohra. Johan Botha too chipped in when he dropped Wriddhiman Saha. Read: Andre Russell powers Kolkata Knight Riders to 1-wicket win over Kings XI Punjab

The Big Show arrives at last: Glenn Maxwell had not gone past 33 in this IPL 2015. However, on Saturday when he came out to bat after the departure of Vohra, everyone saw a different Maxwell. Players like him are just a hit away and it was good to see him take his time, that too five balls to get going. He was particularly severe on Hogg, who was hit for 14 runs in an over to set up the big score. He holed out off Sunil Narine to Botha, who finally held onto a chance, but by that time he had scored 43 in 22 balls. Glenn Maxwell: The fine thread between glory and fury

Spinners keeps Punjab in hunt: Uthappa and Gambhir got KKR off to a good start and raced away to 31 in just the third over. Wickets though started to fall once Uthappa chipped Anureet Singh to Akshar Patel at square leg. Spinners then did the trick with wickets at regular intervals. Maxwell dismissed Manish Pandey first and then Gurkeerat struck to send back Gambhir and that kept Punjab in the hunt.

Pathan-Russell show: Andre Russell and Yusuf Pathan put in a superb 53-run stand in just 25 balls to bring KKR roaring back in the game. Yusuf Pathan got out on 29 but Russell continued on his merry way to score the fastest half-century of IPL 2015, in 19 balls. He hit as many as five fours and four sixes in his knock. Akshar dismissed him but he had already scored 51 in 21 balls to set the game up for Kolkata. Piyush Chawla ensured they got close but with a run needed, Chawla got out, gloving to Wriddhimab Saha. KKR eventually won the game by one wicket and confirmed their place in IPL 2015 playoffs. 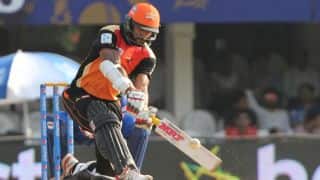