"I don't want to get comfortable. I just want to continue working hard and score a lot of runs." - Kraigg Brathwaite

“Introducing first. Swaggering opener from Barbados… Representing West Indies cricket team since 2011… Making his way to the club of achievers… Punching well above his weight… Unbeaten in both the innings against Pakistan in the Sharjah Test… Playing as many as 427 balls under scorching heat… Gifting West Indies their first away victory against Pakistan after 26 years… Ladies and gentlemen, I give you Kraigg Brathwaite,” an announcer would scream at the top of his voice had cricket been an entertainment show. But this is Test cricket a format once saw suited and booted spectators, gently clapping and giving a standing ovation to the stellar performer. LIVE CRICKET SCORECARD: Pakistan vs West Indies, 3rd Test at Sharjah

UAE was a different case. There were hardly any spectators enjoying Brathwaite’s magnificent show of character in the stadium. No, there were no stylish boundaries and powerful sixes to keep them on the edge of their seats. The time ran slow and scorecard even slower, for Brathwaite displayed traditional form of cricket a notion long forgotten in the modern-day cricket. He kept going, though. No force could stop him (not ever Yasir Shah). He left everything that was supposed to be left. He blocked everything that could produce a wicket. And eventually, he did everything that could position his team at the doorstep of victory.

Now let us walk through some facts and figures.

This was West Indies’ first victory under Jason Holder’s captaincy. This was their first away victory since 2012 against Bangladesh. And if we disregard this one, their previous away victory came against South Africa back in 2007. To add fuel to the fire, they were up against the No. 2 team in ICC Test Rankings. Now, do you see the importance of the triumph?

Amidst all this, Brathwaite became the first opener to remain unbeaten in both the innings. A game that is being played since the 18th century and saw many a great opener, Brathwaite becomes the first one to achieve this feat.

Moreover, he batted for 696 minutes. Too much drama, I know. But it is still difficult to glorify Brathwaite’s grandeur in the third Test.

Brathwaite was never thin on numbers. He made his First-Class debut at the age of 16, boasting of his batting with a stunning 73. Later, he donned West Indies’ jersey in U-19 World Cup 2010. He ended the event as the second-highest run-scorer with four half-centuries.

However, between this phase, he had already entered West Indies’ squad, in 2009. For that matter, his entry to international cricket was a result of senior players going on strike an issue that has been keeping West Indies cricket in dark. That said, he was not drafted in the starting XI. In fact, he played his first Test in 2011. And then began his journey…

In Brathwaite’s presence, West Indies have won 6 matches, that is, in the last 5 years. And these 6 matches, his average reads 93, including 3 hundreds, 2 fifties and a duck.

Ever since his debut, West Indies played 51 matches, emerging triumphant in 12 matches, out of which 6 were graced with the Brathwaite show. This evidences the fact Brathwaite has been playing a significant role for West Indies in Test cricket.

Credit goes to the West Indies selectors as well. They, as a matter of fact, stuck to the same team despite their poor run. In fact, Brathwaite averages only 27 every time West Indies lost a match. For an opener, these numbers are not impressive enough. Hence, it is safe to say that Brathwaite is the impetus that keeps West Indies going.

“Credit must go to Kraigg Brathwaite. He played an outstanding innings in the first innings and took responsibility in the second innings,” captain Holder said at the post-match presentation.

Brathwaite was rightly awarded Man of the Match. He said, “I know my weak and strong areas. I just worked around my strengths and backed my ability.”

He is an astute reader of the game. If truth be told, it was not an easy track to bat on. Even the Pakistan batting unit, who is accustomed to the conditions, failed.

“On a low pitch, I thought front foot will give you more runs than on the back foot. This has been the best batting Test match so far of my career.”

He stands tall. Given his stance, he does well on tracks that produce bounce. As a result, we do not often see him leaning forward and play cover-drives. He simply hangs back and plays it late. But this time, he adjusted himself to the condition. And against all the odds, he displayed some masterful batsmanship.

“I hope to repeat this feat many times in my career. I’ve had a good start. The key is to maintain it.”

His level of patience is peerless, and his career strike rate of 42.87 is a proof of that. However, what commendable is his hunger to fine-tune his skills and not get complacent.

West Indies rank No. 8, above Bangladesh and Zimbabwe. Of course, they need revival. And this win will give them a fresh start, for they edged past a team of Pakistan’s calibre a team only New Zealand could beat in the past 5 years.

Brathwaite is 23, and already has an experience of 34 Tests. Yes, he has a long way to go, and has to scale up his average to share his name with the greats in the record books. All the same, if he continues playing characteristic innings, he is likely to achieve new highs.

“I don’t want to get comfortable. I just want to continue working hard and score a lot of runs,” Brathwaite concluded. 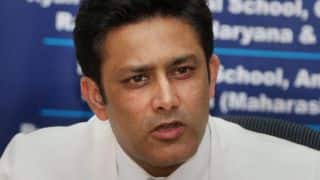