For Neville Cardus, there was far more to Ranji than his leg-glance, something almost mystical in the way that he played his game, indeed in the way he approached the game.

Neville Cardus, who, to those of us that in our own humble ways seek to follow in his enormous footsteps, was more a cricket poet than a cricket writer, described KS Ranjitsinhji thus: when Ranji batted a strange light was seen for the first time on English fields, a light out of the East. For Cardus, there was far more to Ranji than his leg-glance, something almost mystical in the way that he played his game, indeed in the way he approached the game.

But then that was Cardus the writer, who Arunabha Sengupta very eloquently said: For Cardus, cricket was a muse honest men plying their trade took on the stature of mythical luminaries, and often commonplace deeds were presented as eternal quests. The facts often fell prey, burnt down by the brilliant fireworks of wordplay. Cardus converted cricket reporting to literature in the form of historical fiction, which seldom gave credence to accuracy over art. Treating him as historian would be falling victim to a spectacular illusion.

Nonetheless, in the case of Ranji, Cardus was right.

In an age when wickets and heads were uncovered, spinners like Hugh Trumble often opened bowling on sticky wickets making the ball bite, turn and take off with spite and venom, and some of the greatest batsmen to ever stride the 22-yards, like WG Grace and Victor Trumper, were scoring all their runs on the offside, Ranji, single-handedly, pioneered the leg-side game.

Over three glorious days of an English summer in 1896, at Old Trafford, Ranji scored 62 and 154, with a majority of his runs coming on the leg-side, through a stroke that would quaintly be named the glance .

Though the leg-glance was not Ranji s invention, it was still a rarity. How utterly revolutionary this was at the time is attested to by Ranji s close friend CB Fry, no mean batsman himself, who recounted what he was told as a schoolboy: If one hit the ball in an unexpected direction on the on side, intentionally or otherwise, one apologised to the bowler The opposing captain never, by any chance, put a fieldsman there; he expected you to drive on the off side like a gentleman.

But the leg-glance was not all there was to Ranji s batting.

With his wonderful hand-eye coordination, Ranji was able to go on the back foot and defend the ball, something no one before him had dared to attempt. About his preference for back-foot play, Ranji explains in his seminal work, The Jubilee Book of Cricket, It is impossible for forward play to be quite as safe as back play, because there must be a moment when the ball is out of sight … On a treacherous wicket all the batsman can do is to watch the ball with all his might and let the bat follow the eye.

And clearly in line with this observation, when the ball had passed him on the offside, he would execute a stroke that could only ever be described as a late cut , leaving the outstretched gloves of the bewildered wicketkeeper grasping at empty air.

Simon Wilde, one of his biographers, wrote about Ranji: The crowds would stroll the outfield during intervals in play … at a loss to explain what he did: the most disdainful flick of the wrists, and he could exasperate some of England’s finest bowlers; the most rapid sweep of the arms, and the ball was charmed to any part of the field he chose, as though he had in his hands not a bat but a wizard’s wand.

Overall, for the times, considering he was not born in England, and his debut for England was vehemently opposed on that ground by MCC President Lord Harris, who had an intense dislike for Indians, Ranji had an impressive Test record.

In fact, despite his supreme debut effort at Old Trafford when he scored the 62 and 154 not out, his selection for the rest of the Ashes series was debated at Lord s. Writing in Background of Cricket, Sir Home Gordon was to recall: Old gentlemen waxing plethoric declared that if England could not win without resorting to the assistance of coloured individuals of Asiatic extraction, it had better devote its skill to marbles. Feelings grew so acrimonious as to sever lifelong friendships one veteran told me that if it were possible he would have me expelled from MCC for having the disgusting degeneracy to praise a dirty black .

Notwithstanding the initial opposition, in a career spanning 6-years, Ranji played 15 Tests, all against Australia, scoring almost 1,000 runs at an average of 44.95 with 2 centuries and 6 fifties.

His First-Class record was even more remarkable. He played 307 matches over a career spanning 27 years (he played his last First-Class fixture when he was 48), scoring 24,692 runs at an average of 56.37 with 72 centuries and a high score of 285 not out.

And to what did he owe this phenomenal success?

CB Fry, talking about Ranji s strengths, provides a perspective: He tries to make every stroke a thing of beauty itself, and he does mean so well by the ball while he is in. He starts with one or two enormous advantages, which he has pressed home. He has a wonderful power of sight which enables him to judge the flight of a ball in the air an appreciable fraction of a second sooner than any other batsman, and probably a trifle more accurately. He can therefore decide in better time what stroke is wanted, and can make sure of getting into the right position to make it.

It is worthwhile to look at Ranji s personal life, which was not only inextricably linked, and in no small measure, defined Ranji the cricketer. It was also ultimately responsible for cutting short his career as a Test player.

Kumar Shri Ranjitsinhji, the second son of a minor nobleman Jiwansinghji, was born in the small town of Sarodar in the Indian province of Kathiawar. The local ruler of the province, Jam Sahib Vibhaji, did not have any male children, and Ranji was selected as the heir apparent.

But the story goes that discouraged by the ambition of Ranji s family and the conduct of Jiwansinhji, Vibhaji never completed the adoption of Ranjitsinhji. In 1882, one of the women of Vibhaji s court gave birth to a son, Jaswantsinhji. Even though Ranjitsinhji was no longer heir, Vibhaji continued to finance him and give him an allowance.

At Cambridge, Ranji adopted the title Prince Ranjitsinhji, although he had no right to call himself a Prince. However, he increasingly lived beyond his means to the point where he experienced financial difficulty. Eventually, Ranji was unable to appear for the Bar exam, having spent all his money on his lifestyle, and left Cambridge without a degree, but armed with a Cambridge Blue in cricket.

In 1896 Vibhaji died, his 12-year-old son Jaswantsinhji officially succeeded to the throne taking the new name Jassaji. With the throne beyond him in any event, Ranji concentrated on his cricket and 1896 and 1897 were excellent seasons for him and he was firmly established in the England team.

By 1898, buoyed by his rising popularity in England and India, Ranji decided to go to India and challenge Jassaji s succession. While his efforts did not bear the fruit he wished for, on this trip he did meet his next benefactor, Rajinder Singh, the Maharaja of Patiala, a huge cricket fan, who was to support Ranji s lifestyle for the next three years.

And then came November 1900, and the untimely passing of Rajinder Singh.

Ranji s life descended into chaos. Within a year he was facing bankruptcy. He travelled to India to address the situation and secure financial support. Not only was this a fruitless endeavour, but it caused him to miss the start of the 1902 season. Ranji returned in mid-May to captain Sussex, but he was woefully out of form.

But when the 1902 series against the visiting Australians started, Ranji was picked for the first Test, as by this time, it was unthinkable that an English batting line up would not show his name, so popular and dominating had Ranji become in the cricketing firmament.

Ranji struggled with his form from the start, and had a nightmarish start running out his captain Archie MacLaren. Wisden described the incident as a misunderstanding, for which Ranjitsinhji considered himself somewhat unjustly blamed, led to MacLaren being run out, and then Ranjitsinhji himself quite upset by what had happened, was clean bowled . Ranji had scored 13.

That would turn out to be his highest score of the series.

He did not bat in the second innings, played in the second Test that lasted for all of 105 minutes before being washed out. This gave just enough time for Ranji to be bowled off his pad by Bert Hopkins for a duck, attempting a leg-glance without getting his eye set. He did not play the third Test, making himself unavailable citing injury.

When the fourth Test started, the wicket was playing well and Trumper scored a magnificent 104 to take Australia to 299. Luck was not with England, as it rained overnight, and with the sun out the next morning, and the wicket drying, it was a tailor-made situation for Trumble, opening the bowling.

As Wisden described it, The wicket had been drying fast since luncheon and the Englishmen on going in to bat could do little or nothing against Trumble and Saunders, five wickets going down in three-quarters of an hour for 44. Ranji, alas, was one of them, going back to a Trumble delivery that thudded into his pads, when he had scored 2. Things did not improve for Ranji in the second innings, when he departed with his score at 4, dismissed in identical fashion to the same bowler.

Ranji was then dropped for the fifth Test, having scored a total of 19 runs in the 4 innings he batted in that series.

That was the last time Ranji would play Test cricket for England.

Years later, writing about the ironies of careers of cricketers, Cardus would wistfully say in The Cricketer, In 1902, Ranjitsinhji, second in the First-Class averages, scored 19 runs in four completed innings against Australia, such an eclipse of genius which the game had never known before and has not known since.

And despite Cardus hyperbolic assertion that when Ranji passed out of cricket a wonder and a glory departed from the game forever , the genius and personality of Ranji and the long-term impact of his contribution to the game, ensures that his name shines as brightly today as it did that 17th day of July in 1896.

Author s Note: Ranji would eventually become the Maharaja Jam Sahib of Nawanagar when Jassaji died of a mysterious illness for which no aspersions were cast on possible beneficiaries, although certain questions were raised. 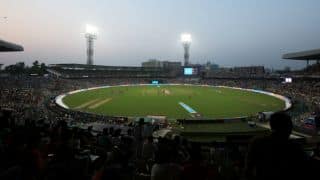 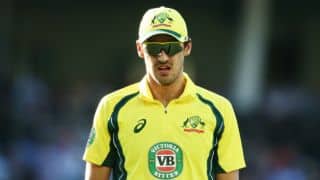