Kumar Sangakkara: 10 of his most memorable innings in international cricket

Kumar Sangakkara: 10 of his most memorable innings in international cricket

Kumar Sangakkara is playing the final match of his glittering career in the second Test between Sri Lanka and India at Colombo.

Kumar Sangakkara played the final match of his glittering career in the second Test between Sri Lanka and India at Colombo in 2014. Sangakkara retired as one of the finest batsmen of all time, and Sri Lanka s highest run-scorer in Test cricket. To mark the conclusion of his career, Shiamak Unwalla looks at 10 of the greatest innings Sangakkara played in international cricket.

NOTE: These are not necessarily his highest scores or even match-winning knocks, but innings of class and substance that fully displayed Sangakkara s talent. The innings have been arranged in chronological order.

Sri Lanka, captained by Sanath Jayasuriya, won the toss and inserted Pakistan in to bat. Muttiah Muralitharan took four for 55 as Pakistan were bowled out for 234. Marvan Atapattu fell off the first ball of Sri Lanka’s innings, but Jayasuriya was joined by the young Sangakkara, just a couple of years into his international career. Sangakkara stroked his way to a fantastic 230 with as many as 33 boundaries and three sixes as Sri Lanka piled on 528. With 32 required to win in the fourth innings, he came and scored an unbeaten 14 to guide Sri Lanka to an eight-wicket win.

Atapattu won the toss and decided to bat first against a South African attack consisting of Shaun Pollock, Makhaya Ntini, Nantie Hayward, Jacques Kallis, and Nicky Boje. Atapattu himself fell early, and once again it was Sangakkara who came to the fore. Batting at No. 3, Sanga hit 31 fours and one six in his 232 off 357 balls as Sri Lanka got to 470. South Africa were bowled out for 189 and after Atapattu and Jayasuriya added 46 in quick time, Sangakkara came out an put the South African bowlers to the sword once again. His 58-ball 64 included 10 fours and a six as Sri Lanka set South Africa 493, only to bowl them out for a mere 179.

In what was perhaps Sri Lanka’s most memorable victory over South Africa, Mahela Jayawardene won the toss and put South Africa in. Muralitharan and Dilhara Fernando took four wickets each to bowl South Africa out for 169. Dale Steyn then removed both Jayasuriya and Upul Tharanga with just 14 on the board to give the visitors some hope. That united Sangakkara and Jayawardene, and South Afica spent the next five and a half sessions including an entire wicketless day chasing the ball to all ends of the park. Jayawardene scored an epic 374 off 572 balls with 43 fours and one six, while Sangakkara made 287 from 457 with 35 boundaries. The pair added a monumental 624 runs as Sri Lanka scored 756 for five declared. Jacques Rudolph, Andrew Hall, Ashwell Prince, and Mark Boucher fought hard, but Murali took six for 131 as Sri Lanka won by an innings and 153 runs.

Jayawardene elected to bowl first against Bangladesh, and his bowlers responded by bundling out the visitors for just 62. Sri Lanka did not have it too easy with the bat, as Michael Vandort was dismissed for 14 before Malinda Warnapura (82) and Sangakkara added 128. Jayawardene scored 49 as well, but Sri Lanka kept losing wickets at one end, while Sanga kept scoring at the other. In the end, Sangakkara made an unbeaten 200 with 20 fours and two sixes while no other batsman barring Warnapura went past 49. Bangladesh fought hard in their second innings, but were bowled out for 299 as the hosts triumphed by an innings and 90 runs.

In one of the most highest-scoring One-Day Internationals ever played, Virender Sehwag (146), Sachin Tendulkar (69), and MS Dhoni (72) led India to a massive 414 for seven. With a gargantuan chase ahead of them, Sri Lanka refused to give up. Tharanga (67) and Dilshan (160) added 188 in 24 overs to lay an ideal platform before Sangakkara came to the middle. His innings almost sealed the game for Sri Lanka, as he hit a frenetic 43-ball 90 with 10 fours and five sixes. When he fell the visitors were 316 for two in the 37th over. Sadly for Sri Lanka, they soon lost their way and Sangakkara s genius was thwarted as India triumphed by a tiny three-run margin.

After Misbah-ul-Haq won the toss and put Sri Lanka in, Junaid Khan took five for 38 to clean out Sri Lanka for 197. Sangakkara managed just two before Aizaz Cheema got him to nick behind to Adnan Akmal. In response, Mohammad Hafeez (75), Taufeeq Umar (236), and Azhar Ali (70) took Pakistan to 511 for six declared. With Pakistan taking a massive lead, Sri Lanka were in dire need of a big score. Tharanga Paranavitana was out first ball, but Lahiru Thirimanne (68) and Sangakkara added 153. However, Sri Lanka soon crashed to 233 for 5, but Sangakkara and Prasanna Jayawardene then took charge. Sangakkara scored a sedate 211 off 431 balls with only 18 fours as Sri Lanka were finally bowled out for 483. With 170 needed to win, Pakistan could only reach 21 for one as the match ended in a draw.

Sangakkara’s highest ODI score came quite late in his international career. Batting first, Sri Lanka lost wickets regularly though Tharanga (43) and Jayawardene (42) had good partnerships with Sangakkara. The left-hander was in another zone though; on a pitch where no other batsman from either side crossed 43, he hit 169 off just 137 balls with 18 fours and six sixes. South Africa folded up for a mere 140, but Sangakkara’s knock showed just how much more superior he was to everyone around him.

Sangakkara’s highest Test score was once again an exhibition of top-notch batting. Batting first, Sri Lanka were 49 for two when Sangakkara was joined by Jayawardene (72). The partnership yielded 178, but no other Sri Lankan batsman after Jayawardene scored more than 47. Sangakkara waged a lone battle, but what a battle it was! His superb 319 came off 482 balls with 32 fours and eight sixes. Without him, Sri Lanka’s score was a middling 268. Bangladesh retaliated with 426 as Shamsur Rahman (106) and Imrul Kayes (115) put on 232. Sangakkara was not done though. Not satisfied with his innings of 319, Sangakkara went on to score 105 in the second innings, putting on 145 with Dinesh Chandimal as Bangladesh were set 467. Mominul Haque’s unbeaten 100 staved off defeat, but Sangakkara had a terrific match.

Among all of Sangakkara’s tons and double centuries, it was an unbeaten 52 that won Sri Lanka their only World T20 title. Batting first, India could only make 130 for four despite Virat Kohli’s superlative 77. A combination of phenomenal death bowling from Nuwan Kulasekara, Angelo Mathews, and Lasith Malinga kept India down to a manageable total, but the Indians refused to give in. Mohit Sharma, Ravichandran Ashwin, Amit Mishra, and Suresh Raina struck to reduce Sri Lanka to 78 for four. Sangakkara played through, scoring an unbeaten 52 off 35 balls with six fours and one six as Sri Lanka won with two overs to spare.

In what was unarguably one of the most thrilling Tests in recent memory, Pakistan won the toss and batted first against Sri Lanka at Galle. Younis Khan slammed 177 while Asad Shafiq (75), Sarfraz Ahmed (55), and Abdur Rehman (50) contributed to help Pakistan to 451. Sri Lanka responded with 533 as Kaushal Silva (64), Jayawardene (59), and Mathews (91) supported Sangakkara.

It was Jayawardene’s penultimate match, and his mate Sangakkara paid him the perfect tribute: 221 serene runs off 425 balls. Rangana Herath then worked his magic, taking 6 for 48 as Pakistan crashed to 180. With 99 to win in fading light and bad weather, Sangakkara’s 22-ball 21 hastened the Sri Lankan innings, though the finishing touches were added by Mathews as Sri Lanka won by seven wickets mere moments before rain would have ended the game anyway. 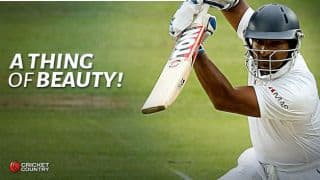