In 2016, he played grade cricket in Perth when he saw an advertisement from Cricket Hong Kong on Facebook, saying looking forward to seeing Hong Kong born players . He got in touch. He was then invited for trials and things took on.

One of the highlights of Hong Kong T20 Blitz 2018 has been the performance of local cricketers. The spotlight has been on the international stars, but the Hong Kong cricketers have made the limelight count. Saturday was no different. Kyle Christie outshone the luminaries of the star-studded Hung Hom Jaguars to claim figures of 4-0-18-4 as his side convincingly beat Hong Kong Island United by 57 runs.

Remember Christie? We ran a story on him that how he debuted in international cricket via Facebook. The Perth-based pacer has certainly grown in reputation.

Jaguars will face Galaxy Gladiators Lantau led by Kumar Sangakkara in the final of the tournament on Sunday.

Sangakkara s current form across formats (though he retired from First-Class cricket last year) is a testimony to the fact that why he is still amongst the best batters in the world even after close to three years of retirement from international cricket.

In a thriller of a contest between Jaguars and Gladiators on Friday, Christie managed to dismiss Sanga for a 42-ball 92. He is eyeing the Sri Lankan stalwart again.

Expecting another close contest in the final. Obviously the key is Sangakkara. He is absolutely in superb form. If we can get him early then it helps and we can go on from there, said Christie after his heroic feat on Saturday.

Christie was born in Hong Kong and was there when his parents shifted base to Australia. In 2016, he played grade cricket in Perth when he saw an advertisement from Cricket Hong Kong on Facebook, saying looking forward to seeing Hong Kong born players . He got in touch. He was then invited for trials and things took on. From playing local cricket to rubbing shoulders with international players and making a difference, Christie s cricket has come a long way.

It has been absolutely amazing. You learn so much from these guys that you don t learn back home while playing club cricket. Ben Laughlin has been fantastic to me this tour, teaching me how to ball the right balls and what balls basically. They lighten the mood and encourage you to think positive. It has been a great experience and I hope I can continue to play for a long time, the 24-year-old added.

Christie clocked good pace. He managed to hit Kamran Akmal on his hand and cleaned him up the next ball. Christie thanked the conditions and elaborated on the plans.

Nice #sunnyday in #HongKong. Can t get better for cricket. A sizeable #weekend gather. And guess what, it s not difficult to spot an @indiancricketteam fan! #hkt20blitz #hongkongt20blitz

I was trying to hit the deck hard. I saw the previous game today and the guys bowling back of length managed to get some nibble. That s my role, to come in and hit the deck hard. I come from Perth, bouncy pitches. Having a pitch liked this helped the cause, said Christie.

Earlier, Jaguars skipper Kinchit Shah won the toss and elected to bat. He laid a solid foundation with 65 before Johan Botha took it on. His 86 not out guided the side to 187 for 3 in 20 overs.

United were never in the hunt, losing too many wickets. Hong Kong internationals Nadeem Ahmed and Christie shared seven wickets among them as Jaguars finished league stages at the top of the points table.

Man of the Match: Kyle Christie 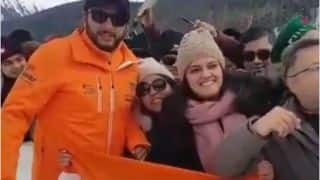