"I think the future is bright for Zimbabwe cricket."

Kyle Jarvis, the former Zimbabwe fast bowler, shocked many followers of the game when he announced his retirement from international cricket in April 2013. Jarvis, who was just twenty four at that time of his retirement was considered an excellent prospect for his country, having taken 30 wickets in eight Tests and 27 wickets in 24 ODIs. His development in T20Is for Zimbabwe was also very promising where he had picked up 10 wickets in nine games.

In an exclusive interview with PakPassion.net, the fast-bowler who is currently playing for Lancashire, spoke about his decision to quit international cricket at a young age, how Zimbabwe cricket can improve its international standing, the upcoming tour of Pakistan by Zimbabwe, his future aspirations and tips that he picked up from Junaid Khan in the previous season with Lancashire. READ: PCB announces its own panel of match officials for Zimbabwe series

PakPassion.net : How tough was it to give up international cricket at the age of 24?

Kyle Jarvis : Yes it was a big decision but it was the right one at the time and I’m happy with how everything has turned out. READ: 2009 attacks remain one of the worst nightmares of my life

PakPassion.net : Any regrets about making that decision to quit international cricket which obviously means missing out on major tournaments like the World Cup?

Kyle Jarvis : I would have liked to have helped out a bit more and done a bit more for Zimbabwe but I’m happy where I am and my future is with Lancashire.

PakPassion.net : What do you feel Zimbabwe cricket need to do to make their team more competitive at the highest level?

Kyle Jarvis : Obviously over the last few years they have had their problems but they have taken some positive steps and are heading in the right direction with Alistair Campbell and Dav Whatmore now involved. I think the future is bright for Zimbabwe cricket. To have someone like Whatmore who has coached some of the best teams in the world and Campbell who has played all around the world means that they will be pushing things in the right direction. READ: ICC not to appoint umpires and match officials citing security

At the World Cup they were competitive for large parts of the game and for long periods which hadn’t been happening previously and that was heartening to see. They put up some good performances but fell short at the end of games and hopefully Whatmore can work with the players on that side of the game and get that little bit extra that is needed to go on and win games rather than just being competitive for large parts of the match and then falling short. READ: PCB to announce central contracts after Zimbabwe series

PakPassion.net : We’ve seen Brendan Taylor also turn his back on Zimbabwe cricket and sign for Nottinghamshire. It must be worrying times for Zimbabwe Cricket to keep losing its best players?

Kyle Jarvis : Yes it must be worrying. Brendan did a lot for Zimbabwe Cricket and his decision was for his family. It’s a difficult one and everyone has to look at their own situation and circumstances before they make such a big decision. However I think Zimbabwe cricket is definitely heading in the right direction now, despite Brendan not being available to them. READ: Zimbabwe tour of Pakistan a ‘ray of hope’, feels Sarfraz Nawaz

PakPassion.net : Zimbabwe is set to become the first international team to tour Pakistan in six years. How do you think they will perform in Pakistan?

Kyle Jarvis : I’m sure the fans in Pakistan are very excited about this series and there will be huge expectations. I’m sure Pakistan will be raring to go. I think it will be an exciting and competitive series but it will be tough for Zimbabwe in those conditions, but I’m sure Zimbabwe will play well, be competitive and put up a good show. READ: Zimbabwe depart for historic series against Pakistan

PakPassion.net : Recently the Federation of International Cricketers’ Associations suggested that Zimbabwe shouldn’t tour Pakistan due to safety concerns. What are your thoughts on Zimbabwe touring Pakistan?

Kyle Jarvis : I’m sure the tour would not have got the go-ahead from the Zimbabwean side if they didn’t feel it was safe. The security delegation and other officials have been to Pakistan and they will have made sure that everything is alright. It’s a good thing that international cricket is returning to Pakistan. It’s great for Pakistan cricket and for the country and the cricketing community. READ: Tickets go on sale for much anticipated series

PakPassion.net : What goals have you set yourself at Lancashire?

Kyle Jarvis : It’s no secret that I started my career at Lancashire last year badly but so far this year has gone really well. It’s a big club, a really good club to be at and I want to establish myself in the team and be part of the club for a long time to come.

I want to be part of a winning Lancashire team, do my best for them and help take the team forward. If I can do my bit, that will be great. READ: Zimbabwe tour of Pakistan 2015 to kick off amidst tight security

PakPassion.net : You were working under Peter Moores last season and this season it’s Ashley Giles. How do the two coaches compare?

Kyle Jarvis : Peter Moores brought me into Lancashire and his style of coaching was very technical in the way he went about things and it was very strategic and with Ashley it’s a lot more laid back and he is more of a man-manager. They have two very different coaching styles but both are very good coaches. READ: Zimbabwe tour of Pakistan is on, says PCB

PakPassion.net : Is playing in domestic leagues around the world particularly in Twenty20 leagues, the way forward for you?

Kyle Jarvis : Yes I think so. Obviously the English County season lasts six months and previously I’ve played some cricket in New Zealand in their domestic Twenty20 competition and hopefully in future I can get involved in the Caribbean Premier League (CPL) or one of the other Twenty20 leagues around the world. READ: Ahsan Raza, 2009 attack survivor, to officiate

PakPassion.net : What’s it been like playing alongside Peter Siddle at Lancashire this season?

Kyle Jarvis : It’s been great, we’ve bounced a few ideas off each other during this season. He has a vast knowledge of the game and he’s been playing international cricket for a long time and has tremendous experience having played all over the world. It’s really beneficial to have the opportunity to play alongside someone like Peter as you can only improve by listening to his advice and watching him bowl.

PakPassion.net : You played alongside Junaid Khan last season. Did you pick up any tips from him?

Kyle Jarvis : Yes I learnt how to move my feet away from fast inswinging yorkers when batting. It was incredible how consistent he was with the yorkers. He is one of the finest death bowlers I have ever seen or played with. He’s a brilliant cricketer. READ: Tickets selling out fast 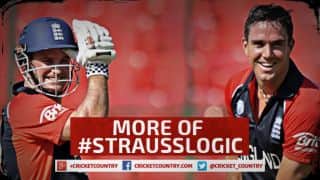