Lahiru Thirimanne: Kumar Sangakkara is the No 1 batsman in the world right now

Lahiru Thirimanne: Kumar Sangakkara is the No 1 batsman in the world right now

Lahiru Thrimanne, who scored a hundred in Sri Lanka’s victory over England in the World Cup 2015 match, talks about his innings and the match

Lahiru Thrimanne, who scored a hundred in Sri Lanka’s victory over England in the World Cup 2015 match, talks about his innings and the match. (ICC Cricket World Cup 2015: Full coverage)

Q: You must be pretty happy with the way things have gone for you in the tournament so far?

Lahiru Thrimanne (LT): Yes, absolutely. I have missed only one match against Afghanistan other than that I scored runs, so very happy about my performance.

Q: What kind of confidence you got playing with Kumar Sangakkara?
LT: He played a tremendous knock today which eased the pressure because when he came in to bat the time run-rate at that time was about 7, 7.5. He rotated the strike and hit boundaries. So it was easy for me at the other end because I just wanted to rotate the strike and let Kumar to bat through the innings.

Q: At of the halfway stage, did you feel that 310 was below par score that you felt you could really chase that down without too much trouble?

Q. Was it helpful to you as a team chasing to have four similar-paced and similar-styled fast bowlers?

LT: Yeah, because in this wicket was really flat. Nothing for the fast bowlers; no seam, no swing.

Q: Where does this innings rank for you personally?
LT: I rank this inning maybe second or third in my career. The Asia Cup final hundred was better than this.

Q: Where does Sangakkara rank in terms of batsmen in the history of the game and what sort of motivation is it with him bowing out for the team to go as far as you can in this tournament?

LT: At the current moment I think he’s No. 1. He is batting really well. Not only is he rotating the strike, but hitting the boundaries as well. So it is very helpful for the team because he got the hundred in 60-odd balls, I think today. So been chasing a total it is really good that Kumar is in good form.

Q. What’s it like playing with Dilshan and Sangakkara, more than 1,000 game experience in one-dayers? Is there a lot of pressure having those guys around you?

LT: I think it’s fantastic because Dilshan, Mahela [Jayawardene] and Kumar are world class players. It is very helpful for the team. I used to bat No 5 or 6 in the past, so when began opening the innings, I had the opportunity to bat with Dilshan and Kumar. That was really fantastic for me because they teach how to rotate the strike and play as per the situations.

Q: When you scored your century, Kumar actually seemed a bit annoyed that you hadn’t turned around and come back for a second. What did he say to you when you did manage to meet?

Q: Your confidence for the team must be high now. What were your thoughts on that game last night with New Zealand now unbeaten at the top and Australia? What are your overall thoughts of that?

LT: I think anything can happen in this tournament. We were one down when things started, but we came back really hard, but that’s not the end. We had to play against Australia in the next match, so we want to give a hundred percent and win that match also.

Q: I think there may be a growing sentiment that while Sri Lanka are a very strong batting side in terms of the winning the World Cup. Do you feel that’s a fair assessment of the team?

LT: Yeah, I think our fielding wasn’t good because we had some issues in the past too. But we had to come back really strong because in this tournament. You can’t do it only batting and survive. You have to field, you have to bowl really well. So we have to improve on that side.
Courtesy: ICC 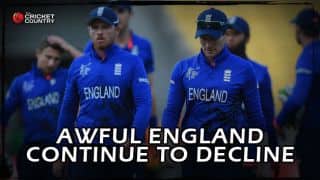