Lahiru Thirimanne: It’s a privilege to share the dressing room with Kumar Sangakkara

Lahiru Thirimanne: It’s a privilege to share the dressing room with Kumar Sangakkara

Sri Lanka defeated Scotland in a Pool A match at Hobart on Wednesday to complete their six matches at the group stage. After the match, batsman Lahiru Thirimanne spoke to the media.

Sri Lanka defeated Scotland in a Pool A match at Hobart on Wednesday to complete their six matches at the group stage. After the match, batsman Lahiru Thirimanne spoke to the media. (ICC Cricket World Cup 2015: Full Coverage)

Q: How is it to be in a dressing room where a legend Sangakkara has scored four centuries, and what is the feeling in the dressing room after that?
Lahiru Thirimanne (LT): It’s fantastic. We are all privileged to share the same dressing room with him. He is playing wonderfully at the moment. Hopefully he continues his form in the next round.

Q: Lasith Malinga has handled a lot of responsibilities. Was it good to have another bowler in there that could bowl above 140? Do you think that’ll be handy in Australian conditions?
LT: Yeah, absolutely. We saw that today. Dushmantha, he bowls 140, 145, so it’s good to see youngsters coming up. So we have to look after them very carefully. Going to the next round, you need to have some experience in your bowling line-up.

Q: Could you give an update on Angelo Mathews’ situation? Is he going for a scan or anything like that?
LT: I think so. He’s strapped up at the moment, so hopefully he’ll be okay. But I think he’s going for a scan tomorrow.

Q: You’ve now got a week until the quarterfinal match against likely South Africa. What would you do in preparation and things like that?
LT: We have a good seven days for the qualifying or so. There are some areas we have to work on, especially fielding and net bowling. We have to improve on that, and that’s good we have time to go to the quarterfinal. So we’ll hope to tune up those areas, and look forward to it.

Q:. Are you quite happy with the way things have going in the few qualifying games where bowling is concerned?
LT: I saw good improvement in a couple of matches. Not in the death overs, but playing against Australia is sometimes very harsh for the bowlers. In the 40 to 50 overs, batsmen go after the bowling, but overall, I feel we need to get more yorkers right, especially in the last 10 overs, so we have to really improve on that.

Q: It seems as if every match, every practice session someone or the other is injured. How are you coping as a team with all these setbacks?
LT: I think we have been here for three months now, so can’t really blame on that, but we have to manage our bowlers carefully, because this is a very long tour for us. We have hopefully another three matches. Bowlers need to be managed very carefully in the next five to six days during training.

Q: What’s the update with Dinesh Chandimal? Will he make it to the quarterfinals?
LT: I think we have a chance, I think there is 80 percent chance of him playing in the quarterfinals. I feel he’ll be fit for the qualifying, so we’ll see. 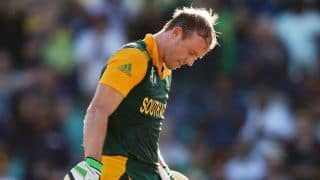