Lahiru Thirimanne, born on September 8, 1989, is a talented left-handed batsman who fits in well into the current Sri Lankan middle-order. Prakash Govindasreenivasan throws light on the southpaw’s career so far and what his role could be for the future of Sri Lankan cricket. Lahiru Thirimanne, born on September 8, 1989, is a talented left-handed batsman who fits in well into the current Sri Lankan middle-order. Prakash Govindasreenivasan throws light on the southpaw’s career so far and what his role could be for the future of Sri Lankan cricket.

When you look at his cover drive, you realise that there is something special about this southpaw. The balance, the reach and the swing of the bat — all seem picture perfect.

Talk of Hettige Don Rumesh Lahiru Thirimanne and you know you are talking about one of the potential torchbearers of Sri Lankan batting. Agreed he is an exciting left-handed batsman in the mould of Kumar Sangakkara.The latter is one of the best to have played for the Island nation with amazing consistency. At a time when some of Sri Lanka’s seasoned campaigners like Sangakkara, Mahela Jayawardene and even Tillakaratne Dilshan are in the twilight of their careers, the baton has to be passed to the likes of Angelo Matthews, Dinesh Chandimal and Thirimanne. So far the triumvirate looks capable of taking up the responsisbility. While Matthews and Chandimal have taken over as skipper and deputy respectively in two formats of the game — One-Day International and Twenty20, Thirimanne is free of additional responsibility at the moment which works well for him to establish as a specialist batsman.

In his brief international career, Thirimanne has made a transition from an opener to the middle-order batsman. Consistency has befriended him after that change in the strategy.

Thirimanne enjoyed a wonderful time with the bat during his first season in domestic cricket. Playing for Ragama CC, he managed to score at an average of close to 60 and was rightfully awarded with a national call-up in 2010. He represented Sri Lanka for the first time in ODIs against India at Dhaka. In the following year, he earned his Test debut in a Test against England at Southampton.

In little over three years he has spent in international cricket, Thirimanne has gone from strength to strength as far his batting and consistency is concerned.

Thirimanne walked into the Sri Lankan side with his eyes set on the opener’s spot. In the 10 Tests he has played so far, Thirimanne has opened the innings in seven of them but hasn’t done enough to set the stage on fire. He seemed to be troubled by the ball that swung away from him early on in the innings. On multiple occasions he was dismissed after attempting to push at those deliveries and ending with a thick outside edge carrying to the first slip.

Poetic justice was delivered when Thirimanne played his first big knock after coming in for an injured Sangakkara. On Sri Lanka’s tour of Australia in 2013, Thirimanne was flown in 36 hours ahead of the Sydney Test after Sangakkara was ruled out. Thirimanne, playing in his first Test since April 2012, was shifted to the number four spot with Dimuth Karunaratne opening the innings. The move worked wonders as Thirimanne scored a crucial 91 in the first innings of the Sydney Test. He applied himself well and worked hard in his innings. He came agonisingly close to his first Test century but the idea of using Thirimanne in the middle-order on a regular basis was already being considered by the Sri Lankan selectors. 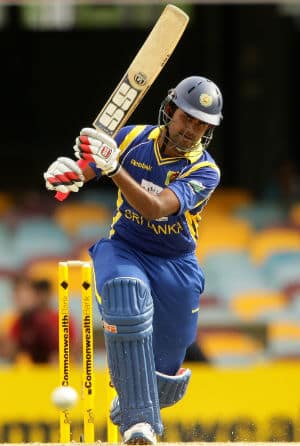 At 24, Thirimanne is an exciting future prospect and one that can fill the void when his senior counterparts decide to call time on their careers © Getty Images

Two months later on Sri Lanka’s tour of Bangaldesh, Thirimanne scored his maiden Test century in what was a run-fest. In the first innings, he added 124 runs with Sangakkara for the third wicket and an unbeaten 203-run stand with Chandimal for the fifth wicket. Thirimanne finished unbeaten on 155, an innings laced with 14 boundaries.

Thirimanne has played 52 ODIs so far and has 990 runs to his name. He played a crucial role in only his fifth ODI when the Sri Lankans were chasing a stiff total of 313 against South Africa at the Wanderers stadium in Johannesburg.  A crucial 100-run partnership for the fourth wicket — again with Sangakkara — helped Sri Lanka keep the momentum on their side. This partnership helped them go from 175 for three in the 30th over to 275 for four in the 44th over when Sangakkara was dismissed. Thirimanne was also soon dismissed but he had done just enough to help his side get past the South African total with one ball to spare.

Two months later, playing against Australia at the Melbourne Cricket Ground (MCG), Thirimanne put in a rare all-round performance in Sri Lanka’s narrow nine-run win over the hosts. With the bat, he scored 51 from 59 deliveries and toiled very hard for it, with just two boundaries coming in the knock. With just three players from the middle-order standing up to the Australian bowlers, his half-century was important for the visitors who could only post a total of 238.

In the break, Australia fancied chasing down the total. Despite the efforts of David Hussey (74) and Shane Watson (65), Australia fell short by nine runs. It is interesting to note that Thirimanne was thrown the ball in the course of the innings and returned with the wicket of the dangerous Michael Hussey who is often more than handy in trick run chases. Thirimanne angled one across Hussey and the latter poked at it, only to be caught behind by Sangakkara.

The ambiguous beast going by the name ‘spirit of cricket’ came to the fore during the Commonwealth Bank series in 2012. In the eighth match of the series between India and Sri Lanka at Brisbane, Ravichandran Ashwin ‘Mankaded’ Thirimanne who was more than a couple of feet ahead of the crease even before the bowler completed his action. Ashwin dislodged the bails and appealed. The umpires went into a discussion. After talking to skipper Virender Sehwag and senior statesman Sachin Tendulkar, the appeal was withdrawn. This, despite the updated laws of the game stating clearly that:

The bowler is permitted, before releasing the ball and provided he has not completed his usual delivery swing, to attempt to run out the non-striker. Whether the attempt is successful or not, the ball shall not count as one of the over. If the bowler fails in an attempt to run out the non-striker, the umpire shall call and signal Dead ball as soon possible.

The matter didn’t end there as Thirimanne continued to go out of the crease before the bowler completed his action. He stayed back when Ashwin had the ball, but continued his act when the others were running up to deliver the ball. Just four overs after being warned, he did it again and forced Vinay Kumar to pull out on his delivery stride. Amidst all the unwanted drama, Thirimanne scored a half-century and was dismissed by Ashwin for a run-a-ball knock of 62.

At 24, Thirimanne is an exciting future prospect and one that can fill the void when his senior counterparts decide to call time on their careers. While he may be handy as a second fiddle to the natural aggressors like Mathews and Thisara Perera in the Sri Lankan middle-order in ODIs, Thirimanne will be far more crucial in shaping the future of Test cricket in Sri Lanka.

Fawad Ahmed jersey issue: Playing for the country is about donning the team’s colours and not the sponsor's