He is the vice-captain of the team and must step up for more; Thirimanne averages a poor 26.40 in his 16-Tests career so far.

Lahiru Thirimanne had a good ICC Cricket World Cup 2015, but his recent Test numbers do not inspire confidence in the vice-captain of the Sri Lankan Test team. Nikhil Popat feels the Sri Lankan batsman is yet to make a mark in whites.

Lahiru Thirimanne, the left hander hailing Moratuwa has been around for five years now but has not had enough and has had consistent success until the recent ICC Cricket World Cup 2015. He had a couple of fifties and a big hundred and things looked promising from him in one-dayers. But the same cannot be said for Test cricket, he has just a solitary score of over fifty in his last 16 Test innings, before his knock in the second innings of the first Test at Galle, against Pakistan. READ: Dhammika Prasad gets his revenge

He is the vice-captain of the team and must step up for more; Thirimanne averages a poor 26.40 in his 16-Tests career so far, which began in 2011, when he made his Test debut at Southampton in England. He has just four scores of over fifty in whites which does not inspire much confidence.

With no Mahela Jayawardene now to play at No. 4, Thirimanne has been asked to handle the role. Thirimanne’s only century came while batting at No. 4, at the very same ground at Galle, but against Bangladesh. Though Bangladesh might be the rising stars of world cricket, Thirimanne knows he must step up more often than what he has so far. READ: Lahiru Thirimanne: Potential torchbearer of Sri Lankan batting

Thirimanne came in the first over of the game when his teammate Dilruwan Perera left the first ball of the day to get bowled. Sri Lanka were 63 for three, and needed someone to bat throughout the day to secure a draw for them. Thirimanne got a superb chance to showcase his skills and he was tested. READ: Sarfraz Ahmed’s aggression catches Sri Lanka off guard

Yasir almost had him in the same over, when he padded one in line of the stumps, but the ball had pitched just outside leg and it saved him. He got off the mark reaching for a ball very wide outside off. His first boundary came off an outside edge on a length ball, which he played from his crease. Thirimanne had his own demons in the mind to beat first to help his team later.

Every batsman gets better having spent enough time in the middle and Thirimanne looked like he was ready to grind.  As he played more, he got more confident and showed why the selectors have invested in him, Thirimanne started to play the cover drive, came down the wicket to slap deliveries over cover for runs with authority.

There was a period where Zulfiqar Babar started to trouble him with some zip and bounce off the surface, and there was fear that he might throw it away as he did in the first innings of this Test, chipping one straight to mid on after getting a start. READ: Keep going, Yasir Shah: Cricket needs more like you

Runs dried up and the pressure began to take a slow toll. He was in the forties for ages, and Pakistan had just called back Wahab Riaz for a spell. First ball, Thirimanne lost concentration and edged it to first slip for a simple catch to Younis Khan. All the hard work was wasted as he missed out a fifty, and more importantly Thirimanne missed out on a chance of being the saviour for Sri Lanka as they went down by 10 wickets.

This has been the norm for him and with a big season coming up, both Sri Lanka and Thirimanne cannot afford such mistakes again and again. They have couple more Tests coming up against Pakistan and Sri Lanka will hope their new No. 4 steps up to try to fill in the boots of Jayawardene. 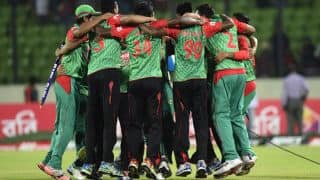 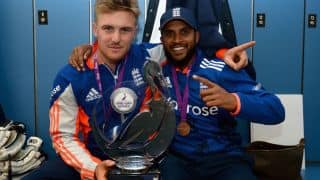 England cricket on the rise with emergence of new talents