Unlike in 2015, when he watched from the sidelines, Rayudu is shaping up as a permanent fixture in India s World Cup team.

In the long list of talented Indian batsmen who did not live up to potential – and it is indeed a long list – the name Ambati Thirupathi Rayudu stands somewhere between Sadagoppan Ramesh and Ajay Sharma.

The talent has rarely been in question since his teenage years, particularly when, at the age of 16, he blazed his way to an unbeaten 177 for India Under-19s in England in 2002. Touted as India material early in his career, Rayudu has gone through dips in form, administrational problems and a move to the rebel ICL and has been in and out the ODI team since 2013. That he has not played Test cricket is down to a number of factors, but now, at the age of 33, Rayudu has survived the sieve of selection to stand as a pivotal member of India s ODI team. Once again.

In his fourth coming as an ODI player, he can be forgiven for feeling a sense of deja vu. Rayudu has played eight consecutive ODIs, looks set for more in Australia and New Zealand in the new year, and could be part of India s World Cup squad for the second tournament in a row. But unlike in 2015, when he watched from the sidelines, Rayudu is shaping up as a permanent fixture in India s 2019 World Cup team if he keeps up his form.

Critically, he has Virat Kohli s backing, the Indian captain stating before the start of the ongoing West Indies series that Rayudu has almost solved a long conundrum over who should bat at No 4. Scores of scores of 22* and 73 have done no harm. Three games remain against West Indies, which will be Rayudu s last chance to impress before India resume playing ODIs in January.

To understand the significance of where he is today, it is important to assess his past. On his ODI debut in Zimbabwe in 2013, he made 63* versus Zimbabwe when India sent a second-string side for a five-match series followed by 5 and 33 in his next two innings on tour. Rayudu played 20 ODIs in 2014, scoring one century and four fifties from 18 innings. During this time he batted five times at No 3, seven times at No 4, five times at No 5 and once at No 7.

In November 2014, he became the fourth oldest India batsman to score an ODI century, at 29 years and 44 days, a landmark that many Indians who have observed his career would say was long overdue. It earned him playing time against Sri Lanka later that month and a spot for the tour of Australia before the World Cup, where Rayudu made 23, 23 and 12. He went to the World Cup but did not get a game during India s run to the semi-finals.

Later that summer, Rayudu was part of a customary second-string side sent to Zimbabwe and scored 124* and 41 in two ODIs. His next chance came a year later, back in Zimbabwe with an even more depleted ODI outfit. He made 62* and 41* and did not play for 25 months, when he was added to India s squad for the Asia Cup last month.

Rayudu s game has been tempered to suit the needs of the team, his dot-ball percentage is healthy and most importantly, Rayudu has looked the part of late. Being out of the ODI team for over two years has not proved a deterrent in terms of his run-scoring abilities. In the tied second ODI against West Indies on Wednesday, Rayudu scored five runs off his first ten balls, then produced two lovely fours against spin to move to 18 from 21. When Kohli was 42 off 46 balls, Rayudu was 33 off 42. Kohli reached his fifty off 56 balls, during which time Rayudu added seven runs in 14 balls. A flurry of boundaries then took him to 62 off 71 balls, while Kohli was left on 56.

It was a very handy innings, and should have been worth a lot more had Rayudu not slogged across the line looking for fast runs. Having the backing of the captain is a huge confidence-booster, and only Rayudu can play himself out of India s middle order from now until the World Cup. Fascinatingly, his latest stint promises to be the defining chapter in a career that has oscillated between the sublime and the sub-standard. 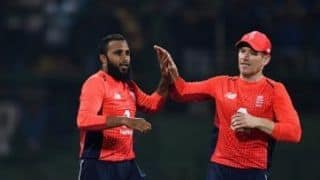 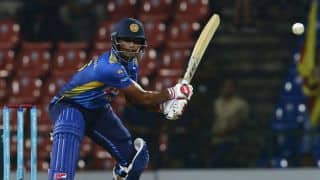