Bengal will kick off their 2014-15 Ranji Trophy season with an away match against Baroda.

Bengal will kick off their 2014-15 Ranji Trophy season with an away match against Baroda. Before their inaugural match, Bengal captain Laxmi Ratan Shukla speaks to Sandipan Banerjee about the prospects of his team in the upcoming tough cricket season.

The first phase of Ranji Trophy 2014-15 is going to start from December 7. To pick the best possible squad for the ICC World Cup 2015, the longer versions of the sport have been delayed this year while the 50-over tournaments (Vijay Hazare and Deodhar Trophies) were scheduled in the first part of the season. But after all coloured-clothing cricket, the premier domestic tournament will finally take place.

For Bengal, this season has been quite decent so far. East Zone reached semi-finals thanks to some power-packed performances by Manoj Tiwary, Shukla and Ashok Dinda in Duleep Trophy. Bengal cricketers have done well in Vijay Hazare and Deodhar Trophies as well.

According to Shukla, these impressive showings by his players will give them a confidence boost ahead of their next Ranji Trophy, where Bengal is placed in a tough group with current champion Karnataka, former champion Mumbai and stronger teams like Tamil Nadu, Railways and Baroda.

Talking exclusively to CricketCountry, Shukla says, “Of late, most of our players are in very good form. This is really heartening for us ahead of our first game.” According to some experts, it will not be easy for Bengal to start with an away game against Baroda, who have players like Ambati Rayudu and Pathan half-brothers in their ranks. But Shukla feels it wont be an issue for his team. “We want to focus on our team, on our strengths. We want to play our game rather than focusing on the opposition,” he says.

In this season’s Ranji Trophy, Shukla’s team will miss the services of key main players like Wriddhiman Saha and Mohammed Shami, who were instrumental in Bengal’s success at past, due to national duties. “Yes, they [Saha and Shami] are important members for this team and will be missed, but we are happy for them as they have got the opportunity to represent the country in Australia,” said a confident Shukla.

In the absence of Saha and Shami, the experience of Manoj Tiwary and Ashok Dinda (and, of course, the captain himself) will hold the key of this team. “Though we will miss couple of experience players but still we have enough experience in the team in the form of Manoj, Dinda and myself. Also, the absence of seniors will give opportunity to youngsters like Shreevats Goswami. We are up for the challenge, ” the confident Bengal captain signs off. 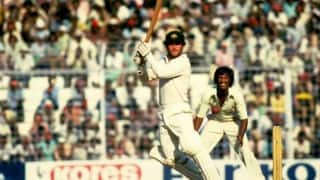 India vs Australia past encounters: Part 2 of 4