An XI of cricketers who captained on Test debut.

What is it like to play Test cricket? What does a cricketer go through once he is informed? What goes inside his mind when he is finally given that cap? Is he more anxious than elated? How anxious is he when he strides out, equipped with the knowledge that he is playing for his country?

If you think that is a tough ordeal, spare a thought for those who actually captained on Test debut. Put yourself in their shoes: their maiden appearance for their nation would involve them putting that national blazer on and walking out to toss.

How about an XI, then? We will, of course, not include the five men who have led one national side on debut for the second side after playing for another: Frank Mitchell (England and South Africa), Iftikhar Ali Khan Pataudi (England and India), Abdul Hafeez Kardar (India and Pakistan), Kepler Wessels (Australia and South Africa), and Graeme Smith (South Africa and ICC World XI). Let us get cracking, then:

Melville scored his first Test hundred in the famous ten-day Durban Test of 1939-40. The next time he batted was at Trent Bridge eight years later, and scored a hundred in each innings. In his next innings at Lord s he became the second cricketer to score hundreds in four consecutive innings.

Melville played all his Tests against England (and led South Africa in 10 out of 11 Tests) and finished with an average of 52.58. The number shot up to 63.22 on English soil. He bowled as well (both off- and leg-spin), and his 132 First-Class wickets came at under 30 apiece.

Not every batsman has hit a six that landed on the roof at Lord s. Mann did that four times in a single innings, against Yorkshire. He scored 9 First-Class hundreds, the most spectacular of which being his unbeaten 101 at Trent Bridge in 1925. He hit 15 fours on his way to guide Middlesex to a successful chase of 502 still a County Championship record.

The Great War took away crucial years of his career, but he nevertheless led England on the 1922-23 South Africa tour. England won the series 2-1 after going 1-down. Mann batted with character: he finished third on both runs and averages, behind only Jack Russell and Phil Mead.

Nayudu was India s first Test captain. His whirlwind 153 in 1926-27 was probably the single-most important innings by an Indian (it helped India get Test status). He scored almost 12,000 runs at 36 and took 411 wickets at 29 with his mixed bag of seam and off-breaks: remember, he played till past 68 (no typo there).

Test cricket came to him when he was almost 37, but even then he top-scored on that 1932 England tour; only Mohammad Nissar and Amar Singh took more wickets; and no outfielder held as many catches. A strict disciplinarian, he was also an excellent fielder.

His role in Indian cricket can fill pages, but this is probably not the place for that.

At Hyderabad, in 1987, Houghton played one of the greatest innings in the history of World Cup cricket. Five years later he led Zimbabwe in their first Test and promptly scored a hundred on debut. He averaged over 43 when Zimbabwe were the weakest side in world cricket and he achieved that despite playing till past 40. This included an 11-hour marathon that yielded 266 runs.

He also kept wickets and was a brilliant slip fielder and why not? He was a goalkeeper in the Zimbabwe hockey side (Pakistan captain Kalimullah hailed him as the greatest he had seen).

George Mann played for Cambridge and Middlesex, scored 32 on Test debut (in South Africa), and led England in every single Test he played. His father Frank (see above) did exactly the same. They also had nearly identical Test batting averages (Frank 35.12, George 37.60), took exactly 3 First-Class wickets each, and fought creditably in World Wars (different ones).

His 136 at Port Elizabeth in 1948-49 was a magnificent innings, but more famously he made sure England went out in pursuit of 172 in 95 minutes. Indeed, he was a positive, inspirational captain but then, so was his father. Had non-cricketing reasons not ended his Test career at 31, he would probably have pipped Freddie Brown as the captain to Australia in 1950-51.

One can only hope his father Frank does not keep him subdued.

Houghton is not the only double-international in our side. Douglas went a step ahead, winning the gold medal in middleweight boxing in the London Olympics of 1908. He was the exact antithesis of that at the crease: no wonder they tweaked his initials (JWHT) to Johnny Won t Hit Today.

Douglas suffered the ignominy of being at the receiving end of the first whitewash in a 5-Test series. Despite that he finished with 8 wins and 8 defeats as captain.

Like several others on the list, Sherwell led his country (South Africa) throughout his Test career. And like Houghton and Douglas, he was a double-international as well tennis being his sport.

His Test career featured two major innings. First, when he batted at No. 11, and helped Dave Nourse add an unbeaten 48 for the last wicket in the fourth innings. South Africa won by 1 wicket: it was their first ever Test win. Under Sherwell, they crushed England 4-1. The next year he opened batting at Lord s after South Africa had been asked to follow on. He clung on to score 115 as they saved the match.

And with the big gloves he was often compared with Dick Lilley and Sammy Carter, the other two champions of the era.

Naimur had a poor Test record, but he makes the cut for three reasons: first, his First-Class haul of 103 wickets came at a decent 31; secondly, he led the weakest side in the world; and finally, his 6 for 132 on debut helped Bangladesh restrict India to a lead of only 29, justifying the former s admission into the Test arena. Naimur also has a First-Class hundred.

If you are still unconvinced, remember only a handful of bowlers have led their sides let alone on Test debut.

Cricket remembers Calthorpe rather unfairly for the Edgbaston match of 1922, when Warwickshire skittled out Hampshire for 15 and enforced the follow-on but lost the match. Calthorpe was leading Warwickshire that day but he also took 4 for 4 in the first innings.

It was probably his wariness that prevented him led him to make West Indies follow-on despite a 563-run lead. It was his last Test, and he was playing his only series. He never got going at Test level, but over 782 wickets at under 30 are not too bad for a side deplete on bowlers.

No, dual internationals are not the only stars of the side. Aubrey Smith is the only Test cricketer to have a star named after him in the Hollywood Walk of Fame.

He was an excellent slip fielder and bowled at a mysterious pace (some claim he was genuinely quick; others call him ridiculously slow). Nevertheless, he had a curious run-up: he started from mid-off and arrived at the wicket almost suddenly to deliver the ball: this earned him the nickname Round-the-corner Smith.

He led England in his only Test, the first on South African soil, and took 5 for 19 and 2 for 42. In First-Class cricket, mostly for Sussex, his 346 wickets came at 22. He was also responsible for the emergence of the Hollywood Cricket Club but all that happened after he quit serious cricket.

Lillywhite led England in the first two Tests in history, and was the last English survivor of the first Test. He bowled left-arm spin with a high-arm action, landing almost every ball at the exact spot he wanted to. He was also an excellent fielder, and scored 2 hundreds.

He averaged 15 for his 1,210 First-Class wickets, acquired over 23 seasons. The fact that he bowled unchanged through a match for Sussex twelve times is testimony to his stamina. He toured Australia six times and North America once all cricket tours not an easy job in the 19th century. There is no doubt that he will handle logistics for our side though Lord Harris, Karl Nunes, or Shrimp Leveson Gower would do a job just as impressive.

Who will lead the side? It is a tough call, as all of them are captains. I chose Douglas simply because he led in the most Tests (18). As for the 12th man, let us close in on the brilliant Herby Wade. 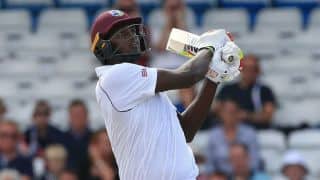