Fakhar is no teenage talent. He is 27. He made his List A debut at 23. He was a late find. He made it to the Pakistan squad, but everyone knew Ahmed Shehzad would play ahead of him.

If you are a Pakistani or a PSL follower, the first paragraph is not for you. If you are not, let me ask you a question: had you heard of Fakhar Zaman, Fahim Ashraf, and Rumman Raees eight days ago? If you had not, let me ask you a second question: are you surprised by the arrival of Pakistan unearthing a supremely talented man in three consecutive matches and winning all three?

Did that India match actually happen 10 days back? Or was it a choreographed production that we saw in the guise of live telecast? If that was a Pakistan cricket team, then what is this? Fine, there is no Wahab Riaz but have the other bowlers not been playing all along? How did the standard of fielding change so drastically?

They had acquired Sharjeel Khan some time back. A brute with the bat, Sharjeel could cross the fence at will. A replacement for Shahid Afridi, we had thought. Then they lost Sharjeel to match-fixing. It was only fair that they would take some time to find another explosive opener.

But then, they managed to pluck Fakhar from somewhere. Fakhar is no teenage talent. He is 27. He made his List A debut at 23. He was a late find. He made it to the squad, but everyone knew Ahmed Shehzad would play ahead of him. Shehzad failed against India. And now Fakhar is suddenly out there, smashing South Africans and Sri Lankans and Englishmen to pulp. His average of 46 has not been boosted by unbeaten innings. His strike rate reads 118.

Yes, there are cricketers like that. That is not the point. The point is, you do not keep them hiding in obscurity till they are 27. That does not make sense.

Rumman had played 2 T20Is, one of them a dead-rubber contest. A month before today he was probably watching Coke Studio and wondering when he would make it to a big tournament. He did an excellent job in PSL this season, but he was not really in contention.

Then, suddenly, Wahab who had done nothing since having Shane Watson dropped by Rahat Ali over two years back was ruled out of the tournament with an injury. Of course, there is nothing new in that: people do get injured and replaced all the time. It does not mean the replacements get picked in crunch matches.

But then, Mohammad Aamer had to sit out with back spasms. And Rumman made his debut in the semi-final against the strongest batting line-up in limited-overs cricket. And he took the first wicket of the match, that of Alex Hales, who had scored 151 runs in the tournament at a strike rate of 99 before today. He took 2 for 44 today. He is 25.

As for Fahim, he was thrown into the mix in the must-win match against Sri Lanka. He got 2 for 37. This included bowling Dinesh Chandimal for a duck. He also bowled a no-ball and 2 wides. Pakistan needed exactly 100 with 4 wickets in hand when he came to bat. He hit a four and a six. They all got excited. Then he decided that there is no point in hurrying while returning to the crease, and got out in the laziest manner possible.

They replaced Fahim with Shadab Khan. Shadab had toyed with the West Indians earlier this year, but one should not read too much into it: after Shadab, Rashid Khan has also exposed the weakness of the West Indians against googly bowlers.

Shadab has not done anything of note in this tournament. He was scored off easily in the India match. He bowled only 5 overs against South Africa. Today, he had Jonny Bairstow dropped, got a caught-behind appeal given against Eoin Morgan (it was overturned), and got Joe Root. His figures read 9-0-40-1. Take the first 2 overs away, and they read 7-0-27-1. Remember, England have been scoring at 6.26 since the 2015 World Cup.

Shadab is 18. He played his first List A match barely a year back.

Oh, and of course, there was Junaid Khan, who has played 8 ODIs in two years before today. Four years back Pakistan played the Champions Trophy with three left-arm fast bowlers Mohammad Irfan, Wahab, and Junaid. This time they do not have Irfan and have lost Wahab midway, but they have Junaid, have found Aamer, and have found Rumman from some obscure excavation.

Think of the attack: a fast bowler back from a five-year ban last year; another who plays misses more than misses; two debutants; a teenage spinner; and three batsmen who bowl (Mohammad Hafeez, Imad Wasim, and Shoaib Malik).

That was the attack that won them three consecutive matches after they were demolished by India. No, that does not make any sense.

But hey, there was more. Pakistan fielded a different lot for the last three matches. They chased the ball like their lives depended on it. They flung themselves on the ground. No, they were not perfect: but every mis-field was followed by spectacular efforts, which did not make sense after the lacklustre show against India.

Either that team was Pakistan or this team is. They could not have been the same team.

There is no system, no pattern in the entire concept. Their board personnel change more frequently than Fakhar hits fours. One of their T20 teams is named called Zebras.

Nothing makes sense in Pakistan cricket. They bowl wides. They play ugly, irresponsible shots to get out in crunch situations. Their fielding is so ridiculous at times that they leave even their staunchest supporters in splits.

Misbah-ul-Haq, their last Test captain played till 43 and had scored a hundred in his maiden Test on English soil, in orange boots.

None of this fits into the profile of a side that keeps beating strong sides. And yet, they do, making pundits tear their hair in despair.

The Australians and Englishmen and Indians and everyone else can go on harping about system and mental disintegration and how winning is a habit and whatnot. That is the wise, the scientific way to go about it.

What they should not do, however, is make a prediction when Pakistan are playing cricket. It is not the wisest thing to do. 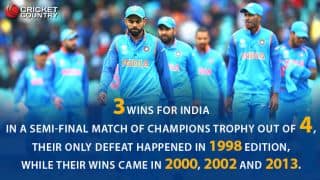