LED zing bails: ICC’s latest tryst with technology that could be controversial

LED zing bails: ICC’s latest tryst with technology that could be controversial

The LED-lit bails not only helps the umpires, but also appeals to the fans.

Slightly heavier than the traditional wooden bails, the LED zing bails are the newest technological induction in cricket that was seen in the Australian Big Bash League. While the International Cricket Council (ICC) continues to introduce technology in the sport to make it more advanced and accurate, the LED zing bails also have their fair share of issues that need to be addressed if they are to be used for a long run.  Devarchit Varma has more…

The International Cricket Council (ICC) approved the use of LED (Light Emitting Diode) zing bails in One-Day Internationals (ODIS) and Twent20 Internationals from October 1, 2013. The technology can now be seen used in the ongoing ICC World T20 2014 tournament as well. For fans around the world, it is fascinating to see the bails (powered by low voltage batteries) light up the moment they are off the stumps, meanwhile sending a radio signal to the stumps that also emit bright light.

The approval came as a step towards further technological advancement in the sport, and also the fact that it brought more attraction with people in the stadium and those watching matches on television. Fans keep anxiously waiting for the bails to get dislodged to see what the newest development is. However, the LED zing bails have their own share of controversies.

During the Big Bash League (BBL) 2014 match between the Melbourne Stars and Sydney Thunders on January 1 this year, there was a bizarre incident that surprised many, drawing comments from the likes of Ricky Ponting. Sydney Thunders had lost 15 matches on a trot and were desperate to break the jinx in the tie against Melbourne. Chasing 156 to win, Melbourne had two of their most experienced campaigners in Brad Hodge and David Hussey batting at the crease. The required run-rate was getting close to 11 and Melbourne needed couple of few big overs to bring that down.

In a desperate effort, Hodge slammed the ball straight down the wicket to the bowler Tillakaratne Dilshan. The bowler collected the ball and immediately threw it on the wickets. The bails did get dislodged — the rules say a batsman is out if the bails are dislodged. But to everyone’s surprise, the LED zing bails flashed the lights and settled back onto the wickets immediately. The non-striker, Hussey, was declared not out.

It was indeed a controversial decision, and an instance that showed that this latest technology in cricket produced the first instance of being controversial. Ponting, who was in the commentary box immediately observed that he hasn’t seen anything like this in his entire career and the same was later acknowledged by Hussey.

The LED zing bails, having low voltage batteries, are heavier that the traditional wooden bails. But they also are slightly lighter than those wooden ones that are used in the matches where wind is heavy.

The instance that occurred in the BBL match was indeed the first that left the fraternity surprised, but it has its benefits as well. The zing bails contain a sensor that can determine within one-thousandth of a second when a wicket is hit. Once the bails are dislodged, the bails while flashing a bright light immediately send a radio signal to the stumps, which also flash. This invention will definitely help the umpires to arrive at the best decision possible in tricky situations — like run-outs and stumping.

There have been many situations where a decision has gone in favour of a batsman as the umpires failed to arrive at a conclusion, but LED zing bails will help them to find the best solution.

Like the Decision Review System (DRS), the LED zing bails too have controversies associated. But so far, it has been a successful move and the ICC needs to ensure that it remains safe from the controversies like the DRS is dealing with. 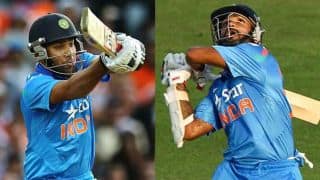