Part 1 of the series on Chinaman bowlers deals with Ellis Achong, often wrongly credited with the first popular exponent of the genre of delivery.

With the English batsmen proving clueless against the left-arm wrist spin of Kuldeep Yadav, Arunabha Sengupta documents the past and present exponents of the art of the Chinaman (oops, left-arm wrist spin) in international cricket.

According to many, including respected cricket writers, the term Chinaman came to the fore when an exasperated Walter Robins departed in a huff, stumped off Ellis Achong as England played West Indies at Old Trafford, 1933. Infuriated at being deceived by a delivery that spun into him and went through his legs, Robins, a leg-spinner himself with the ability to hit the ball hard, fumed to umpire Joe Hardstaff Sr: Fancy getting out to a Chinaman!

Curious that Robins should have been offended, given that the ball turning into him was a legitimate wrist-spin delivery by the left-arm spinner. It was not the wrong un at all. There are some who maintain that the term Chinaman should be used for the one that goes the other way for the left-arm wrist spinner, not the normal deliveries which turn in to the right-handed batsman.

More curious is the fact that, as shown by B Sreeram, two years before this event Maurice Leyland had Stan Nichols caught by wicketkeeper Arthur Wood in the Yorkshire-Essex encounter at Headingley. Hull Daily Mail reported that the batsman had been chasing Leyland s Chinaman . So, the Achong-Robins incident was not really the event that led to the now politically incorrect term being coined.

Achong was not the first exponent of the art either. Sketchy documentation hints that Buck Llewellyn, arguably the first coloured cricketer to play for South Africa, experimented with this delivery during the late 1890s and the early 1900s. Perhaps the indigenous origins of both Achong and Llewellyn led them to this curious style. Well, to be honest, that is a rather unresearched assumption but interesting nevertheless, as most un-researched comments are.

But that he was not the pioneer takes nothing away from the fact that Achong was a fantastic exponent of the art. Learie Constantine, within whose earshot Robins barked those infamous words, later wrote that Achong s slows could tempt an angel out of heaven.

Achong captured just 8 wickets in 6 Tests, at a high 47.25 apiece. But in First-Class cricket, which he played mainly for Trinidad, he bagged 110 victims at 30.23. And many more were scalped in Lancashire League for Rochdale. Interestingly, he joined the club when their negotiations with another overseas cricketer fell through. This cricketer, who did not join the club, went by the name Don Bradman.

Achong, rather inferior to Bradman with the bat with a single-digit Test average, nevertheless captured over 1,000 wickets during a 17-year stint in Lancashire League.

There are some lesser-known facts about this cricketer of Chinese ancestry. First, he was a fantastic athlete who also played football as a left-winger, turning out for the Maple side in the local league. In 1954 he became the first Test umpire of Chinese descent. And in later life, he served as a sports coach with the Trinidad and Tobago Ministry of Education and played the roles of coach and selector for the Trinidad & Tobago cricket team. 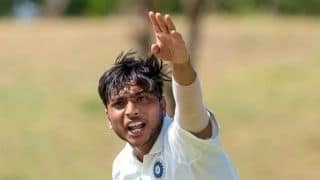