The first star of Irish cricket, Leland Hone was also the first cricketer to play a Test for England without representing a county in First-Class cricket.

Leland Hone, born January 30, 1853, was the first Irishman to play Test cricket for England. A batsman who also kept wickets, Hone was also England s second gloveman after John Selby. Before all that, the Hones made significant contributions towards Ireland cricket. Abhishek Mukherjee looks at the first star of Irish cricket.

Only a rudimentary thinker would deny that the Irish experience is at once postcolonial and post-Imperial. Declan Kiberd.

Contrary to popular belief, Ireland took to cricket seriously as early as in the early 19th century, especially in Kilkenny and Ballinasloe. Charles Lawrence of Surrey, who toured Australia with England in 1861-62 and coached and managed the Aborigines on their 1868 tour, played a crucial role in spreading cricket in Ireland.

By 1850 cricket became popular in Ireland, what with English teams visiting them at regular intervals. Then came a surprising ban on foreign games imposed by Gaelic Athletic Association. It someone played a foreign sport professionally, he would be banned from Irish sports like hurling and Gaelic football.

Fortunately, cricket had infiltrated sufficiently in Ireland to allow a cricketer of Leland Hone s stature to emerge. Only 8 of Hone s matches were given First-Class status, in which he scored a mere 85 runs at 7.08 and effected 9 catches and 2 stumpings.

In all recorded cricket he scored 822 runs at 12.82 with 2 fifties, in addition to 54 catches and 17 stumpings, from 41 matches. One must remember that he played in an era when batting competence was considered a bonus for wicketkeepers, and they often batted at nine, ten, or Jack.

Hone was not the first Irish-born cricketer to play Test cricket. That honour would go to Tom Horan. Thomas Kelly, too, made his debut before Hone. However, both men played Test cricket for Australia.

Hone s only Test was the one-off contest on Lord Harris team s 1878-79 tour of Australia. It was also the third Test in history.

Hone hailed from a cricketing family. Elder brother William Sr showed the way, playing for MCC, Southgate, and all-Ireland. Along with Tom Casey, William Hone Sr was considered the most prominent Irish cricketer in the 1860s. His 9 First-Class matches fetched him 266 runs at 20.46 and 3 wickets at 21.33.

Three cousins of William Sr, Nathaniel, and Leland William Jr, Thomas, and Jeffrey also played for all-Ireland. All in all, the Hones were the First Family of Ireland cricket of the era.

Born in Dublin, Leland went to Rugby for his education. Once back, he became a regular for Gentlemen of Ireland and Dublin University. When I Zingari came over in 1874, Leland played them for all-Ireland. Playing alongside him were William Sr and Jr. In that 12-a-side match, Leland Hone scored 1 and 4, but took two catches. Daniel Neill and Rowley Miller bowled Ireland to a 15-run victory.

The next year Ireland were even more imposing when I Zingari toured them. This time they won by 201 runs. Hone played a major role, with 16 (Ireland scored 94) and 47, 4 catches, and 2 stumpings.

His 1877 performances were even better, when he scored 74 not out against I Zingari for Ireland. The following year he made his First-Class debut, playing two matches for MCC, one against each University, both at Lord s. He had poor returns to show, scoring 0, 27, 0 and taking two catches.

However, when Lord Harris took his team to Australia in 1878-79, the only man who could keep wickets on the side was Alexander Webbe, a batting all-rounder from Middlesex. Hone was picked.

Hone s batting did not come off in the tour, with 22 against Victoria and 23 against Bendigo being the only scores of note. The initial matches on the tour were not given First-Class status, which meant that his third First-Class match was his Test debut. He became the first Test cricketer to play for England without playing First-Class cricket for a County.

The Test is famous in history as the one where Fred Spofforth claimed the first ever Test hat-trick. His first two wickets were a dignified pair off the ground but rather ordinary on it The Reverend Vernon Peter Fanshawe Archer Royle and Francis Alexander Mackinnon, 35th Mackinnon of Mackinnon. The third, Tom Emmett of Yorkshire, was no pushover.

The score read 26 for 7 at the fall of Emmett s wicket. Lord Harris and Charlie Absolom then added 63, and Hone emerged at 89 for 8. He held fort, letting Absolom reach his fifty. Once Absolom fell for 52, Hone attempted a deflection off Spofforth. The catch down leg that Jack Blackham came up with was described by John Lillywhite’s Cricketer’s Companion as little short of marvellous. Hone had scored 7.

After bowling out England for 113, Australia piled up 256, thanks to a typically grafting 235-minute 73 by Alec Bannerman and seven other batsmen reaching double-figures. Hone held two catches, both of Emmett, those of fellow Irish-born Horan, and of Tom Garrett.

Spofforth followed his 6 for 48 (and 39 with bat) with 7 for 62, skittling out England for 160. Hone, coming out to bat at 118 for 8, scored 6 before Spofforth bowled him. The target of 19 was overhauled by Charles Bannerman and Billy Murdoch in a mere 11 balls.

Hone kept wickets through the rest of the tour, occasionally relinquishing the big gloves to Webbe. Four of his tour matches were given First-Class status, two each at Sydney Association Ground (later SCG) and MCG. He also played in New Zealand, and on his way back home, against an all-USA at Hoboken.

On return, he played several matches for all-Ireland. He also played at MCC once, against Oxford at Lord s, scoring a pair but taking 2 catches. While this meant he never played for a county, it also meant that his entire First-Class career was played at Lord s, MCG, and SCG not a bad haul!

His last innings of note came against Aldershot Division in 1883, when he scored 72. After that he made a solitary appearance against I Zingari in 1888, but did little of notice.

Leland Hone passed away in St Stephen s Green, Dublin, on the New Year s Eve, 1896, a month before his 44th birthday. 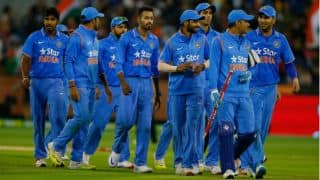