Les Ames was easily the best wicketkeeper-batsman of the 20th century.

Les Ames, born December 3, 1905, was the first choice England wicketkeeper of the 1930s and also a batsman good enough to score 100 First-class hundreds. Arunabha Sengupta looks back at the career of the stumper who held his own as a batsman in an era of Don Bradman, George Headley and Wally Hammond.

The 1930s perhaps witnessed the most glittering phase in the history of batsmanship. Don Bradman was striding the world with his colossal feats. Wally Hammond was lighting up the world with majestic drives. With each stroke of his gifted willow, George Headley was providing the world with ample evidence that the West Indians would soon become a major cricketing power. Herbert Sutcliffe missed Jack Hobbs at the top, but was still the greatest opening batsman in the world. Then there were others of the stature of Stan McCabe, Bruce Mitchell, Maurice Leyland, Vijay Merchant, Eddie Paynter, Patsy Hendren, Bob Wyatt, Jack Fingleton — each spending their days in the sun by amassing more and more runs. And Neville Cardus waxed eloquent on most of them, even though his words were not really expended in the true proportion of their respective greatness.

International Cricket Council (ICC) ranking algorithms can now be retrofitted on the past record books, and we can thus determine where each player had at particular points of time in those days long gone by. There are ways to determine their respective ratings even during the periods we can know only through match reports, scorecards and grainy YouTube videos.

And if we look at the rankings of the batsmen at the end of the 1934-35 season, we find England wicketkeeper Les Ames comfortably nestled at a high No. 7 – after Bradman, Headley, Sutcliffe, Hammond, McCabe and Leyland.  The ones who trailed behind him happen to be Hendren, Wyatt, Merchant, Paynter and the rest of the great names who paraded world cricket in those days.

The greatest ‘keeper-batsman of the 20th century

Ames passed away in 1990, before Adam Gilchrist, Andy Flower and Kumar Sangakkara had made their incredible marks in the game. And hence, Wisden had no hesitation in observing in his obituary that he “was without a doubt the greatest wicketkeeper-batsman the game has so far produced.” With a Test average of over 40 and 8 centuries in 47 Tests, Ames was indeed the best batsman among regular wicketkeepers the world had seen till then — ahead of the likes of Jeff Dujon.

A correct and classical batsman, with fluent style and gorgeous drives, Ames was reputed to be an entertainer with the bat. When well set, he often essayed high lofted drives that bore his unmistakable signature.

It was his batting that catapulted him into the limelight, when he complemented his 122 dismissals for Kent with 1,919 runs to complete a wicketkeeper’s double in the domestic championships in 1928. He was to repeat this feat in 1929, this time scalping a record 127 dismissals — unbroken to this day. Later, as an established Test player, Ames took it to unprecedented levels in 1932 — scoring 2,482 runs at 57.72 with 9 hundreds, to finish third in the national averages, besides accounting for 104 dismissals of which a mind-boggling 64 were stumpings.

In 1933, after a gruelling and controversy-ridden Bodyline tour of Australia, he scored 3,058 including 3 double-centuries and 6 other hundreds. This season also saw him getting his highest First-Class score — 295 against Gloucestershire at Folkestone scored in a little over 240 minutes, containing a six and 34 boundaries. Wisden estimated that he scored at around 50 runs per hour throughout his career.

Ames was picked to tour Australia in 1928-29 as reserve wicketkeeper to George Duckworth, mainly due to his superlative batting in the 1928 county championships. He would have played in the final Test at Melbourne purely as a batsman, but just before the match broke his finger while keeping to Larwood.

Tall feats with the bat

Ames finally made his début against South Africa at The Oval in 1929, and subsequently went to West Indies under Freddie Calthorpe. The representative matches in West Indies were later given full Test status, and Ames achieved immense success with the bat.

His first century came in the second Test, while putting on a match-winning 237 with Hendren. This was the first ever century by an England wicketkeeper. In the fourth match at Kingston, Ames scored 149, which remained his highest Test score.

In 1931, against New Zealand, Ames and Gubby Allen both hit hundreds and put on 246 for the eighth wicket at Lord’s — a world record that stood for 79 years before Jonathan Trott and Stuart Broad added 332 against Pakistan in 2010. The runs were made in less than 3 hours after England had been tottering at 190 for 7.

He was to slaughter the Kiwis with his bat yet again in 1932-33, helping a rampaging Hammond put on 242 in 144 minutes for the fourth wicket.

In 1935, against South Africa at The Oval, Ames plundered 123 before lunch on the fifth morning — a record for the most runs in a morning session of a Test match that still stands today. Ian Bell has been the only other Englishman to score a hundred before lunch in a Test.

However, 7 of his 8 hundreds were scored against New Zealand, South Africa and West Indies, and so Ames was naturally far more proud of his Lord’s ton against Australia in 1934. The situation was demanding as well. England was 182 for 5 on the first afternoon and was on the verge of a collapse when Leyland and Ames put on 129. Ames batted over four hours for 120, an innings which was instrumental in deciding the course of the match. Hedley Verity took 15 wickets and England won by an innings, but they would have been caught on the sticky themselves if Ames had not resisted on the first day to ensure a big first innings score.

Ames batted well right through to the end of his Test career. He scored an important 83 against Australia at Lord’s in 1938, and averaging of 67.80 with a highest of 115 not out against South Africa in March 1939, before the cannons of the Second World War shifted the focus to a greater and more morbid game.

Although many argued that Ames was an average keeper chosen for England because of his batting ability, his glovework of a consistently high standard. Against South Africa in 1938-39 he conceded a bye for every 275 balls delivered in the series. During the Bodyline tour, Jardine preferred him to Duckworth and he took the thunderbolts of Larwood and Voce calmly and efficiently. There were few gimmicks in his keeping. His secret was anticipation, being in the right position to receive the ball without wild contortions and gymnastics. His catching was unhurried and stumping almost apologetic. He kept with equal success to the four-pronged pace attack of the Bodyline series and the spin of Verity, Walter Robins and Eric Freeman.

It was said of Ames that he made wicketkeeping look easy. It is the greatest compliment that can be paid to a wicketkeeper.

A squadron leader in the RAF during the War, Ames returned to First-Class cricket and enjoyed success with the bat and glove once the mayhem ended. But, his Test career was over. He finished with 2,434 runs at 40.56 in 47 Tests with 74 catches and 23 stumpings.

He was not done yet. In 1950 Ames scored his 100th hundred in the course of a brilliant win against Middlesex during the Canterbury Week, becoming only the twelfth player — and the first and only wicketkeeper to achieve this feat. Playing for Kent, he scored hundreds against every other English county — another remarkable achievement with the bat.

In the winter of 1950-51, Ames led a Commonwealth team to India. During this tour he was plagued by back problems which ultimately ended his splendid cricketing days.

Ames continued to remain associated with the game as an administrator, manager and selector.

When he passed away in February 1990, Wisden noted in his obituary, “If ever there was a true man of Kent, it was he.” 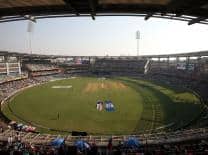