Like MS Dhoni, some cricketers opt for the same jersey number throughout their career, while some like to change it with time: Sourav Ganguly had 1, 24, 99. The most common reason to keep one s jersey number is the birthday and many like Dhoni, AB de Villiers, Yuvraj Singh, Harbhajan Singh, among others follow this, while others have peculiar reasons. Here is a list of some lesser-known facts associated with jersey numbers:

Rahul Dravid (19): Ever wondered why Dravid wore jersey number 19? It is his wife s birthday.

Virat Kohli (18): Kohli owes a lot to his father, who passed away well before Kohli tasted the success he is enjoying right now. Kohli was away playing domestic cricket during his father’s demise. He went back to do the final rites and then came back to play a brilliant innings that brought him to limelight. When awarded with India debut, he chose to wear number 18 in remembrance of the day his father passed away.

Faf du Plessis (18): Du Plessis not only shares the jersey number with Kohli, but his reason is to remember his international debut for South Africa, which was on January 18, 2011.

Muralitharan, the all-time highest wicket-taker, wore 800 in IPL. He previously used to wear 8 while Gayle used to wear 45.

Sachin Tendulkar (10), Rohit Sharma (45) and Virender Sehwag (44, 46 and blank): Tendulkar had started his career with jersey number 99. But his astrologer asked him to change it to 10 for success. We know the rest. BCCI retired the jersey number after Tendulkar called it a day, barring Shardul Thakur to use it.

The same is the case with Rohit, whose lucky number 9 was not available when he made his debut. His mother suggested him to wear 45 (4+5) instead.

An interesting case is that of Sehwag who started off with 44, changed it to 46 after his astrologer s advice and then wore a blank jersey because he believed he did not need a number to score any number of runs.

Ashwell Prince (0+5): After Hansie Cronje s untimely death due to helicopter crash, Prince wore jersey number 5 (which was Cronje s jersey number) but added a +0 to it.

Herchelle Gibbs (changing jersey): Talking of South Africa, Herschelle Gibbs had a weird habit of changing his jersey every year. For instance, it was 00 in 2000, 01 in 2001 and so on.

Sarfaraz Khan (97): Okay, here is an intriguing one. Sarfaraz Khan started playing cricket as his father inspired him to take it up. As he made his Under-19 debut for India, he wore 97. In Hindi, nine is written as Nau and 7 as Saat . So, it is more of Naushad -> Nausaat -> 97.

Shane Warne (23): 23 is a very popular jersey number in the world of sports, with David Beckham and Michael Jordan wearing it apart from Warne. Jordan was Warrne s inspiration, and he chose to adopt Jordan’s jersey number when he joined soccer and carried it onto cricket as well. Warne is so fond of his jersey number that he named his bar Club 23 .

Lockie Ferguson (87): 87 was not Ferguson s first-choice jersey number when he made his New Zealand debut but 69, a number he used to wear for Auckland Aces. However, New Zealand do not permit any cricketer to wear jersey number 69 for the dual meaning the number bears. So, he went for 87 the reason for which is not quite clear.

Morne Morkel (65): While many are proud of their achievements in cricketing world, Morkel is probably more proud of his height (6 5 ), which is why his jersey number is 65.

Marlon Samuels (730): Marlon Samuels was once accused of fixing and had to sit out for some time. Upon his comeback, Samuels flaunted jersey number 730, which was the exact number of days he was banned from playing cricket.

Special mention: After the unfortunate demise of Philip Hughes, Australia retired the jersey number 64 in his memory. 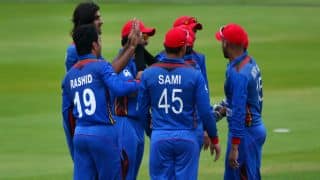