Plunkett was considered merely an experiment during the pre-Stuart Broad days.

After being battered by the Australians 5-0 in Ashes 2013-14 by a certain Mitchell Johnson, England have had their prayers answered with their own version of the Australian speedster. Johnson and Plunkett’s paths have taken a familiar road to success. R Vishal compares the duo’s excellent comebacks.

Beleaguered and constantly in and out of the side of the side for close to a decade, Mitchell Johnson admitted to have considered quitting. Had the selectors not placed their faith in him during the build-up to the Ashes 2013-14 tour, we might not even have seen one of the most thrilling displays of red-hot pace bowling in recent years.

While Johnson was running through the English batting order, there was a lot of talk about Michael Clarke using the left-armer in short bursts. With the sheer amount of cricket being played in this day and age, pacers suffer breakdowns with each passing series.

Johnson’s carnage though, might have given the English selectors food for thought. A structure to a pace battery took shape – variety with the faster bowlers rather than variety with the make-up of the bowling line-up. The England Cricket Board (ECB) didn’t even select a frontline spinner for the home series against Sri Lanka.

Liam Plunkett’s call-up after seven years though, raised a few eyebrows. While Johnson was always seen as a bowler brimming with potential, Plunkett was merely an experiment during the pre-Stuart Broad days. While pace legend Dennis Lillee revived Johnson, it was an Australian speedster from a different generation, Jason Gillespie, who transformed the out-of-favour Plunkett.

Signing up for Yorkshire, coach Gillespie replicated the pace card of the Australian team-management. With small dozes, Plunkett was running with serious pace and was touching 90 mph at will. How did he get that extra yard of pace?  Barring Johnson, most speed-guns in recent times have sacrificed their pace for accuracy and longevity.

There is no doubting the fact that Lillee had sat down with Johnson and ironed out glaring deficiencies. This is where Gillespie should be lauded for his work with the Englishman too. There was one common denominator that Johnson and Plunkett shared – running in with pace.

In the two Tests against the Lankans, the 29-year has been fast, getting the odd ball to swing and has been a constant menace to his opponents. Plunkett recently attributed his new found success to the coaching methods he experienced at Yorkshire. He also mentioned England batting legend Geoffrey Boycott’s advice of encouraging him to steam in without thinking too much about peripheral details.

Apart from donating a kidney to his ailing father a few years ago, Plunkett also hinted in an interview with the Telegraph about being over-coached in his younger days. In a nutshell, rather than enjoying the sheer joy of firing in and hitting the deck hard, far too much emphasis  is laid on refining a player’s technique. Plunkett’s marvelous comeback should pave the way for the grassroots in Old Blighty to encourage the simple pleasures of playing cricket too.

R Vishal is a journalist and alumnus of Asian College of Journalism. He can be followed on Twitter@vishhell) 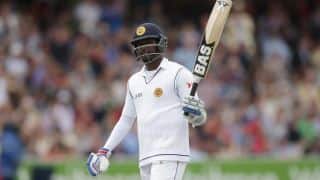