Shanthakumaran Sreesanth and Ankeet Chavan have been banned for life by the BCCI after they were found guilty of spot-fixing during the Indian Premier League (IPL), 2013. Meanwhile, Siddharth Trivedi has been banned for a year and Amit Singh faces a five-year ban. Nishad Pai Vaidya reviews the decisions and determines what lies ahead. 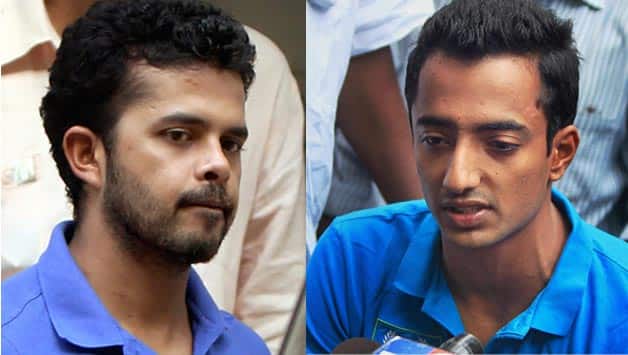 Shanthakumaran Sreesanth and Ankeet Chavan have been banned for life by the BCCI after they were found guilty of spot-fixing during the Indian Premier League (IPL), 2013. Meanwhile, Siddharth Trivedi has been banned for a year and Amit Singh faces a five-year ban. Nishad Pai Vaidya reviews the decisions and determines what lies ahead.

Friday the 13th spelt doom for Shanthakumaran Sreesanth and Ankeet Chavan — players accused of indulging in spot-fixing at the Indian Premier League (IPL), 2013. Following months of legal drama and the respective bail procedures, the Board of Control for Cricket in India’s (BCCI) one man probe panel, Ravi Sawani submitted its report and recommended harsh penalties after finding the tainted trio guilty. While Sreesanth and Chavan have been banned for life, the decision on Ajit Chandila would be made later. Amit Singh has been banned for five years, where as Siddharth Trivedi faces a year out of the game But, how much will this decision by BCCI affect the legal proceedings against the accused which were instituted by the Delhi Police?

The BCCI’s call is independent of the court proceedings. The chargesheet was filed in July this year and the Delhi Police have enunciated their evidence. The accused may have committed the folly, but there is no law to punish spot-fixing in India. The charges filed pertain to cheating under the Indian Penal Code (IPC) and the Maharashtra Control of Organised Crimes Act (MCOCA). Thus, when the matter comes up before the court, the judge would only look into the “offence” and determine whether it falls within the legal definitions. So, this judgment would basically determine whether spot-fixing comes under the purview of cheating under Indian law.

Coming to the bans imposed by the BCCI, it certainly sends out a strong message. Having said that, there is no denying the fact that the board’s credibility has taken a huge hit in recent times. Firstly, a two-member probe panel comprising of former judges had handed “clean chits” to the Rajasthan Royals and the Chennai Super Kings. There was also no word on Gurunath Meiyappan, the son-in-law of the Board President N Srinivasan, who was arrested on charges of betting.

Secondly, the Bombay High Court had deemed that probe panel illegal and unconstitutional. And, after that, Srinivasan has been trying to come back to power, even as the Supreme Court is yet to make a decision on the matter. Interestingly, the same Srinivasan chairs the disciplinary committee meeting. Isn’t there a glaring credibility crisis?

When the “clean chits” were announced, the public wasn’t given the details of the investigation or the evidence that they may or may not have found. A few months down the line, they have handed four bans after finding them guilty and one hopes they reveal the details to the public. While, the big-wigs and the men with money and control were absolved, the players have been given harsh sentences. That isn’t to say that the players are guilty or not, but the public deserves to know about the decisions taken by the board and the findings of the committees.

The players may go on to challenge this in court as was done by in the past by cricketers who were banned for alleged match-fixing. The BCCI’s ban shouldn’t have much of an effect on the criminal case filed by the Delhi Police. Even if the players are acquitted there, it would solely be on whether they have cheated the public or not and the MCOCA with their alleged acts of spot-fixing. Thus, when the players do challenge their bans in that scenario, they have to prove that they haven’t been involved in corrupt practices.

What does this make of the fledging career of Sreesanth? The bowler’s talent was never in question, but his temperament always found him in hot water. Time and again, his tantrums were the topic of discussion. Since making his debut in 2005, he hasn’t played as many games as one thought he would. It would be the end of an unfulfilled career. Even if his ban is reversed by the courts, it is unlikely that he would comeback, given India’s increasing fast bowling resources.

Chavan had a fantastic domestic season and could have had a good career ahead as an all-rounder. Amit Singh didn’t play the Indian Premier League (IPL) this year. He may never get back again. Trivedi co-operated with authorities throughout, but has been handed the one year penalty for not reporting an approach. In many ways, it is a message for the other players, that they shouldn’t keep quiet if they are witness to something against the anti-corruption code.

Through that, Harmeet Singh would breathe a sigh of relief as he was absolved for the lack of evidence. He maintained that he was tricked into meeting bookies and wasn’t a part of the whole thing. Even the Delhi Police had said that Harmeet wasn’t involved. Yet, the left-arm spinner faced a hard time and the prospect of an uncertain future. Not only was his domestic career in jeopardy, but he also wasn’t allowed to play in Mumbai’s Kanga League, which is a local club tournament. This should certainly help his career get back on track.

Nevertheless, Harmeet’s case does beg the need for player’s education. A youngster like him may not be aware of the murky dealings and wouldn’t know how to approach the authorities. At that age, they can be easily shocked or even scared, which may prevent them from reporting the matter. However, a player like Sreesanth has been through all the formalities being an Indian cricketer, but if he is indeed guilty, then that hasn’t been useful.

This episode is certainly not over. Remember the 2010 spot-fixing controversy. The International Cricket Council (ICC) had awarded bans to the three Pakistani cricketers. But, it was only later that the criminal proceedings found them guilty and they were jailed. Sreesanth and the others would face the music in court, but it seems to be in their favour. Whether they have done it or not, does it matter?

Jeff Crowe: Former New Zealand skipper who is one of the top match referees in the current era