Thanks to his receding hairline, Gordon Lindsay Weir was seldom addressed by his first two names by his teammates: it was always “Dad”. Merv Wallace, his teammate, mentioned in an interview with the celebrated New Zealand journalist Don Cameron for The New Zealand Herald: “He lost a lot of his hair quite early; he then looked more elderly than the rest of us, and so became fondly known as Dad.”

They laughed, they made fun of him, but they all loved and respected him. Wallace said that Weir was “a very fine batsman, able to hit hard when needed but was better known as an elegant stroke-player. He could bowl his slow-mediums very well, and was a very good field — a 100% team-man.”

When Daddy was a little boy

“Dad” was the younger brother of Alison Francis “Frank” Weir, a batsman who later represented Auckland. He took to cricket and rugby from a very young age, and was an accomplished fly-half in the latter. He went on to represent the Auckland Rugby Union side nine times. He eventually preferred cricket, and a teenage “Dad” made his debut against Wellington at Eden Park, making an immediate impact with four for 48. He played his next two matches with Frank with moderate success.

Weir failed on debut in the Test, scoring 3 and 21 at Basin Reserve (though he dismissed Geoffrey Legge, his first Test wicket). New Zealand encountered a remarkable collapse, going down for 440 after Stewie Dempster and Jackie Mills had added 276. Before the next Test, Weir scored 77 and 60 in MCC’s tour match against Auckland, and retained his spot in the third Test.

The three-day Test at Eden Park turned out to be a draw after rain washed out the first two days. Arthur Gilligan declared at 330 for 4, and time ran out with the hosts on 96 for 1, Weir finishing on an unbeaten 27 and adding an unbroken 69 with Dempster.

A fourth Test was hastily arranged at the same ground, and it turned out to be a draw as well. England amassed 540 (Weir got Legge again, though not before he scored 196); batting at No. 3 he scored 63, next to only Tom Lowry’s 80. New Zealand scored 387, and the Test petered out to a draw.

After a few ordinary matches, Weir finally got going on English soil against Glamorgan at Cardiff with 38 and 100*. He also managed 101 and 50* against Lancashire at Liverpool and 3 for 46 and 5 for 57 against Somerset at Bath, but barring these, Weir never really got going in England — barring the Lord’s Test.

New Zealand put up a good show in the Tests, managing to draw what was supposed to be the only Test at Lord’s. Batting at three, Weir scored 37 as New Zealand collapsed from 130 for 1 to 224 against Ian Peebles and Walter Robins. Lowry gave Weir the new ball with Ian Cromb, and it was the former who reduced England to 31 for 3.

England were reeling at 190 for 7 when Les Ames and Gubby Allen came together, both scored hundreds, and added 246 for the eighth wicket. Lowry brought Weir back; he removed Ames, Gubby Allen, and Robins in quick succession, but England still managed a 218-run lead.

The tourists lost Mills early, but Weir played his part, helping Dempster add 99 for the second wicket in 130 minutes before he was cleaned up by Allen for 40. Both Dempster and Curly Page got hundreds, Roger Blunt missed his by four runs, and Lowry set England a target of 240 in 2 hours 20 minutes: the hosts finished with 146 for 5.

So impressed were Surrey and Lancashire with the performance of New Zealand that they decided to host an extra Test each. England won by an innings at The Oval and the third at Old Trafford was washed out, but the young New Zealand side, “Dad” included, had won the heart of the English.

The South Africans toured New Zealand in the summer of 1931-32, and whitewashed the hosts 2-0 in the mini-series. Weir scored 46 in the first innings at Lancaster Park, but it was in the second innings, after New Zealand had conceded a 158-run lead, that he came to his elements.

He had to walk out at 16 for 2 to join Blunt, who followed soon, and Weir stood tall in the procession that followed against the leg-breaks of Quintin McMillan and the swing bowling of Neville Quinn. He was eventually left stranded for 74, scored in 135 minutes, as New Zealand collapsed to 146 and lost by an innings. Weir failed in the next Test at Basin Reserve.

Douglas Jardine’s team played two Tests in New Zealand on their way back from the Bodyline series, and to their credit New Zealand drew both despite Wally Hammond’s superlative performance (227 and 336* from his two innings). Weir put up a decent show, top-scoring with 66 at Lancaster Park and snaring Freddie Brown and Bill Voce at Eden Park.

Unfortunately, there was no international cricket for New Zealand for several years till they toured England in 1937. Before the tour, Weir had visited Wallace at a sports shop in Auckland with a golf professional present. The golfer asked Wallace to “introduce Dad to the girls on the boat”.

As things turned out, Wallace introduced Weir and Walter Hadlee to two women called Betty and Lilla. While Lilla gave birth to three international cricketers (one of them a legend; he also married a Test cricketer), Betty went on to marry “Dad” Weir.

Weir did not do a lot to write home about on his second tour; it was one of the wetter summers, and the New Zealand team was a lot weaker than their counterparts from six years earlier; as a result their performance was severely hampered. There was no encore of 1931.

Despite his failure, His innings against Worcestershire at New Road was a special one. Set to chase 429 New Zealand were down to 68 for 7 when Weir walked out to join Lowry, and the pair added 156 in a terribly skewed partnership. After Lowry was dismissed for 45, Weir had support from Alby Roberts and Norman Gallichan, and when the tourists were bowled out for 292 he was left stranded on 134.

He also played a Test on that tour, at The Oval, the last of the series and the last of his career (which also marked the debut of Denis Compton). New Zealand saved the Test but Weir failed, scoring 3 and 8. He was snared by Alf Gover, a few months older to him, in the first innings: both men would later go on to live surprisingly similar lifespan.

Weir continued to play for Auckland till World War II set in. In his final pre-War match, Weir picked up a career-best 6 for 56 to rout Wellington at home. He joined the Army, and played a match for New Zealand Army against New Zealand Air Force at Lancaster that was granted First-Class status.

He played a solitary post-war match against the touring MCC at Eden Park before hanging up his boots.

Weir went on to become the selector and coach of the Auckland teenage Brabin Cup side. About a dozen of his student made their ways into First-Class cricket. He also taught English at Mt Albert Grammar School (he was one of the more popular teachers) while helping the students with cricket and rugby.

Weir was a frequenter of Eden Park; if one has to go by Cameron, he did not miss a single rugby or First-Class cricket match played at the ground for half a century. Cameron called him the “Father of Eden Park”. When he elaborated the reason to Weir, he responded: “I suppose that is a reasonable, but over-flattering, comment, but please do not later burden me with a Grandfather of Eden Park tag.”

He did live long enough to be called a grandfather, though. When Gover passed away on October 7, 2001 at the age of 93 years 220 days, Weir became the oldest living Test cricketer. He later passed away on October 31, 2003 at Auckland; he was 95 years 151 days. At the time of writing this article he is one of the eight Test cricketers to have lived past an age of 95 years.

In his obituary, Wisden wrote the lines “Stature rather than statistics. Modesty rather than majesty.” There could not have been lines more apt to describe Weir, but the final word should perhaps go to one of Weir’s old friends, who said at Weir’s funeral: “You know, if they ever remade the film Goodbye, Mr Chips, Dad would have been perfect replacing Robert Donat in the title role.” 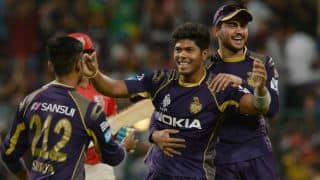