Tom Walker was a splendidly dour defensive batsman who perfected the art of stonewalling against the dangerous innovations of David Harris.

Tom Walker, born November 16, 1762, was a splendidly dour defensive batsman who perfected the art of stonewalling against the dangerous innovations of David Harris. However, he was also a man who experimented a lot with the ball and was the first to try out both round-arm bowling and slow lobs. In the second episode of the series on the forgotten art of lob bowling Arunabha Sengupta talks about the life and career of this curious character.

Tom Walker was known as Old Everlasting . His hard ungainly scrag of mutton frame and wilted apple-John face with long spider legs gave the impression that the day Almighty had put him together, He had forgotten to pack muscle and sinew in his tool box. A bundle of bones, held together by a skin which was textured like bark of an old oak tree. It seemed that he relied only on his tendons to hold himself together and to keep his limbs moving.

John Nyren also wondered whether there was any blood that ran through his veins. Walker was one of the first men to demonstrate an admirable defensive technique. He was one of the very few who could keep David Harris at bay for hours. Indeed, on occasions these two Hambledon players found themselves on opposing sides and once Walker had faced 170 balls from the great pioneering lobster and survived all of them, scoring one solitary run off the lot. We have covered that in the first episode.

Doing so, Walker s knuckles were often thoroughly ground by the deliveries. The bones crunched and the skin cracked and split. But, according to Nyren, there was scarcely any blood to be seen. If there was any trickle, it was taken care off with the long thin frame bending down and rubbing the back of his hand in the dirt of the pitch.

But he refused to budge. In metaphorical terms, the bean stick of a man seemed to be carved on the pitch in granite. He was one of the first traditional opening batsmen, who went in with a straight bat and the intention of staying there till the end. Thus the moniker Old Everlasting . He did not score quickly, sometimes did not score at all. But the opposition bowlers were liable to be driven crazy as he hung on to his wicket.

In case something displeased him, as in a ball going not where he had intended it, he emitted a grunt. Rev. John Mitford described it as being like a broken-winded horse, only of a deeper bass.

When Lord Frederick Beauclerk bowled ball after ball at him and Walker kept blocking them over and over again, the peer was exasperated enough to throw down his white hat and call the stick of a man: a confounded old beast. And Walker retorted, I doan t care what ee zays. And then he carried on batting.

It was a significant exchange, between bat and ball, between nobility and yokel. Because, while Beauclerk was a son of the Duke of St Albans, Walker, and his brother Harry, were the two members of the Hambledon Club who were real country bumpkins.

The brothers were born and brought up in family farms near Hindhead. According to Nyren, Never came two such unadulterated rustics into a civilised community. Tom Walker, in particular, was a constant source of entertainment to the side with his unsophisticated manner and ungainly bearing. When he ran, which was rather seldom, it was an uncoordinated confusion of arms and legs.

His batting feats were many. Like Harris, he practiced through the winter in a barn and was a good driver on both sides of the wicket apart from being a classic stonewaller. Perhaps the most famous batting exploit was when he came close to scoring a century in each innings, when he carried his bat for 95 not out and followed it up with 102 for White Conduit against Kent at Bishopbourne in 1786. No one had got closer to a century in both innings till then, and the bat with which he scored those first innings runs is still preserved at Lord s, with the inscription Walker 95, 86 . He managed 6 hundreds and 21 fifties in all and averaged 19.25. In those days, it was phenomenal.

He was canny too. He conserved his energy. Once he was batting with a fleet-footed batsman named Noah Mann. And there was a stroke that eventually went beyond the agreed boundary line. But by then the quick Mann had lapped him and the two were making for the same end. Mann patted him on the shoulder and remarked, Good name for you Walker. You never were a runner.

However, in this series we are interested in the feats of Walker the lob bowler. And indeed, he did leave plenty of mark there too. Not only that, there were other revolutions he brought forth. Some argue that his bowling feats were more important in shaping the history of the game than his batting deeds.

Walker was not a regular bowler. Indeed, he was not even a consistently used change bowler. But when he was put on, he experimented.

In 1792, he stood at the crease and defied history. Till then all bowling had been underarm. And Walker jerked the ball with his arm raised sideways. That was the first instance of roundarm bowling, and it came off at tremendous pace.

Almost immediately the Hambledon Club outlawed the innovation. It would take a long, long time, but the movement towards overarm had started. John Willes of Kent would revive the movement in a couple of decades.

Having been thwarted in his methods, Walker just changed his mode of thinking, coming up with still more innovations. Speed had been denied. Now, instead of sending the ball down at the usual pace, he tried bowling slower lobs. He lobbed them gently into the air, and they acquired flight, sometimes with a touch of bias that confused batsmen.

It was in June, 1792, that Walker played for England against Kent. He did not score too many, 3 and 10 in totals of 103 and 68. But he got a few wickets. Harris was playing for Kent in this match and the end of the match was hastened when Walker s tantalising loop confused the tail-ender and crashed into his stumps. In spite of the low scores, England won by 10 runs.

In the opposition was Silver Billy Beldham, the greatest batsman of his day. And he was almost apologetic, and stated with some regret for Walker s success, I feel so ashamed of such baby bowling. Indeed, sometimes it looked as if it would not even reach the other end.

Baby bowling or not, slow flighted lobs had been discovered. In fact, slow bowling with flight through the air had made an entry into the annals of the game. The man pioneering the change was strangely not a regular bowler at all.

Walker played regularly until he was fifty. Later, he dispensed with his lifelong profession of farming and became a gamekeeper. Later he moved to Chiddingford, Surrey, just south of Haslemere, where he and his wife kept a grocer s shop. He passed away at the age of 68. 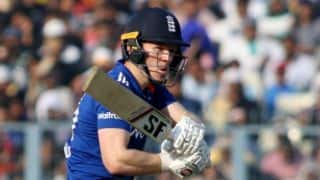