CricketCountry historian Arunabha Sengupta recounts the life and career of this colourful bowler of tremendous pace whose delivery once supposedly killed a stray dog loitering on the boundary line.

George Brown, born April 27, 1783, achieved the distinction of being classed as a fast bowler while bowling underarm. Arunabha Sengupta recounts the life and career of this colourful bowler of tremendous pace whose delivery once supposedly killed a stray dog loitering on the boundary line.

In the first volume of Arthur Haygarth s Scores and Biographies, published 1862, it was stated that for sheer pace George Brown could be bracketed with three later bowlers, Walter Marcon, HW Fellows and W Fellows. Another man who came within this group was George Osbaldeston. According to the analysis, these five stood ahead of the other bowlers of pace such as Alfred Mynn, John Jackson and Thomas Sherman.

The most peculiar feature of this opinion was that while Marcon, the Fellows, Mynn, Jackson and Sherman were all later practitioners of the new variety of bowling called round-arm, Osbaldeston and Brown were old fashioned underarm bowlers.

And while The Squire Osbaldeston excelled in all departments of the game and that included bowling the ball at quite some pace, Brown was easily way faster than him. In fact, the difference piqued The Squire enough to make him scratch his own name off the MCC Members Board.

Born in Stoughton, Sussex, Brown lived most of his life in the seaside town of Brighton and was, thus, often referred to as Brown of Brighton. He stood at 6 feet 2 and a half inches, and weighed 15 to 18 stone at various stages of his playing days. According to contemporary accounts, he had an arm as thick as a normal man s leg.

Brown sent them down with a low-level, straight-down under-arm swing, putting heavy momentum into his delivery and follow through.

So tremendous was his pace, that Brown always had two long-stops, stopping edges, tips and byes. There is the legend, perhaps apocryphal, that at Lord s one long stop tried to stop his ball with his coat, but Brown bowled right through it and it went through and struck a dog, killing it instantly.

Well, the killing of the dog is perhaps one of the ever-growing myths surrounding cricket. However, it was agreed that his speed was deadly. The wicketkeeper was at constant peril, and often stacked his clothes with layers of straw. A long-stop named Dench insisted on doing the same.

William Wordsworth, the great poet, was a big fan of the game. It was his nephew Charles, Bishop of St Andrews, who once saw Brown bowling at Brighton. Perhaps it was the imagination of the aficionado, but he affirmed that he saw a ball hit the stumps in such a way that both the bails flew as far back as the bowler s wicket.

Brown mostly bowled with all his fielders behind the wicket. It was tempting to poke the ball in front of the stumps for singles. However, it took very good batsmen to manage that in those days before the advent of pads and gloves. William Ward did it at Lord s once, standing firm, pushing them for singles. Brown was reluctant to give chase, and so gingerly a couple of fielders had to be brought up in front.

And then there was the great Silver Billy Beldham. In 1819, when England played Hampshire, Beldham was 53. As Brown was eager to get going on the eve of the match, Beldam fingered his bat and asked him, You will be good enough to allow me this piece of wood, won t you George? Certainly, replied Brown. Quite satisfied, so tomorrow you shall see, replied the old batsman. England won by 7 wickets and Beldham batted only once. He scored 72, an impeccable innings, and William Fennex and Thomas Beagley, both sound judges of the game, concurred that they had never seen such dominance of bat over ball. Beldham cut or slipped every ball bowled at him until Brown was forced to send down deliberate wides.

But those days were exceptions. In the normal course of events, Brown was seldom bested. He could not only bowl fast, but could do it all day.

There is the story of his doings in a single-wicket match in which Osbaldeston was also taking part. After Brown had bowled for a little while, The Squire said, You won t keep that pace long, I know. And Brown replied, Oh yes, I can bowl like that all day if you like. And he did bowl in that fashion for four hours and a half without intermission. He sent down 230 balls in all, and 8 runs were scored off him. When he went in after that, he drove the first ball through a paling across a lane that ran outside the ground. Brown was no fine bat, but with his enormous build he was a powerful hitter.

Yes, he did have some talent with the bat. In the 51 recorded First-Class matches that he played variously for Hampshire, Sussex, Players and England, he is recorded to have taken 89 wickets; but seldom were non-bowled dismissals recorded in the bowler s favour in those days. But he also scored two fifties, no mean feat in that era. He was 42 when he went in first in the famed Sussex vs Kent match at Brighton, which as essentially a trial game for round arm bowling. He hit 70, and picked up 6 wickets in the second innings.

According to the April 1831 issue of the Sporting Magazine, in 1819 Brown had thrown a 5 oz ball on Walderton Common, out and back. Each throw had been measured to be approximately 137 yards.

According to the August 23 issue of Bell s Life, in 1818, in a single wicket match, he lowered five wickets in six balls, among the players he dismissed were William Lillywhite and James Broadbridge .

In 1818, Osbaldeston was pitted against him in a single wicket match. When Brown bowled faster and got the better of him, the disgruntled Squire went up to the Member s Board at Lord s and scratched his name off. When he tried to reinstate himself, his long-time foe Lord Frederick Beauclerk would have none of it.

Brown s exploits did not end with his deeds in the field. He fathered as many as 17 children. Two of his sons played First-Class cricket, John with little success but George Grainger Brown with a lot of it. George Brown Jr went on to play with distinction for several of the United England sides in the 1850s.

Later in life Brown, the father that is, went into business as a tailor. But, the call of cricket was too strong. He took tenancy of the Prince s Cricket Ground in Brighton, holding it from 1831 to 1840, doing his best to promote matches. However, he found that running a cricket ground was not a profitable enterprise.

It was in 1857, in the midst of the successful cricketing days of his son, George Brown the great underarm fast bowler, passed away in Sompting, Sussex. 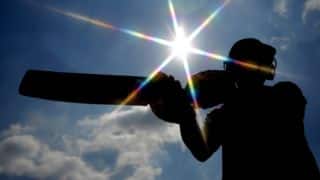 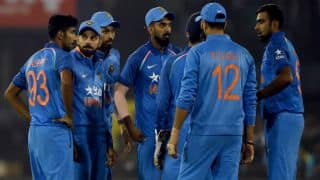 India slip to No. 4 spot in ICC ODI team rankings; New Zealand jump to No. 3