Rony Stanyforth served Yorkshire for almost two decades and England during both World Wars. He also led them to a series win in South Africa.

Born May 30, 1892, Lieutenant-Colonel Rony Stanyforth was an excellent wicketkeeper who served Yorkshire for close to two decades and England during both World Wars. Abhishek Mukherjee looks at the first wicketkeeper to lead England.

If you think a hard-fought Yorkshireman, seldom does an amateur Etonian resembling a Greek God come across your mind; if you think a strict disciplinarian from the army, you do not visualise a man in huge gloves crouching behind the stumps. Ronald Thomas “Rony” Stanyforth was all four rolled into one.

Despite being a sound wicketkeeper — good enough to play and lead (probably because of his amateur status) England in 4 Tests — Stanyforth never took the world by storm with his batting, scoring a mere 1,092 runs at 17.33 with 6 fifties from 61 First-Class matches, in addition to 72 catches and 21 stumpings.

What made Stanyforth stand out was his strong sense of morality, which gelled seamlessly with his sense of humour, making him an excellent leader. Ian Peebles wrote in The Cricketer: “With his humour, warmth and fibre he was the most entertaining and convivial team-mate yet as captain, though unobtrusively, very much in command of the situation…In the affairs of cricket the same qualities made him a splendid administrator, dauntless in what he regarded as being right, whether popular or not.”

“I don’t know how good a cricketer Major Stanyforth is, but there can be few better speakers,” said General Smuts after he had met Stanyforth the first time. There could be few better reasons for an Englishman to lead his side, given the era.

Born in Chelsea, Rony Stanyforth was the son of the son of Edwin Wilfred Stanyforth of Kirkhammerton, Yorkshire Hall. He went to Eton and to Oxford University. He failed to get the Blues, but did a decent job behind the stumps. He made his First-Class debut against MCC in 1914, scoring 4 in each innings and managing a solitary catch. War broke out thereafter, and he would not play another First-Class match for eight years.

He served the British Army with distinction in World War I, earning the Military Cross and Royal Victorian Order. Following The War, he played for Combined Services, Army and MCC. He scored 89 not out against Cambridge at Lord’s in 1923 and went to Argentina as Arthur Gilligan’s deputy in 1926-27.

MCC was expected to steamroll Argentina, but the hosts surprised them by defeating them in one of the matches at Buenos Aires. In the next match, where Stanyforth top-scored with a career-best of 91, they struck back with an innings victory. Playing for Army, he scored 57 and 61 not out against Oxford University in the summer of 1927. That winter Lt Col Stanyforth was plucked out of obscurity to lead England on their tour of South Africa: he had not played a Championship match till then.

With Stanyforth’s humour, warmth and fibre he was the most entertaining and convivial team-mate yet as captain, though unobtrusively, very much in command of the situation

The Test series was a close-fought affair; England won at Old Wanderers and Newlands and drew the third Test at Kingsmead, but the hosts bounced back to square the series with victories at Old Wanderers and Kingsmead. When he went out to toss in the first Test, Stanyforth became the first wicketkeeper to lead England in a Test (Alec Stewart is the only other one to do so till date).

The Test also marked the debut of greats like Wally Hammond, Bob Wyatt and Peebles, along with Ewart Astill and Geoffrey Legge. George Geary won the first Test for England, while excellent batting by the England top-order turned a 117-run deficit into a victory for England.

After a drawn affair in the third Test, a hundred from Herbie Taylor and some hostile bowling from George Bissett and Alf Hall brought South Africa home in the fourth Test. England also lost the fifth Test, but by then Stanyforth had picked up an injury; Greville Stevens had replaced Stanyforth at the helm, and the big gloves had been passed over to Harry Elliott.

The series was a personal disaster for Stanyforth, who scored a mere 13 from 6 innings at 2.60 with a highest score of 6*, in addition to effecting 9 dismissals. He never played another Test, and remained the only Yorkshireman to lead England between Stanley Jackson (1905) and Norman Yardley (1947).

The previous sentence could be misleading, since Stanyforth, despite having led England in four Tests, was yet to make his Championship debut. That opportunity came in 1928, where he played three matches against Warwickshire, Middlesex, and Hampshire. As a result the number of his Championship appearances was less than the number of Tests he had led.

Stanyforth toured West Indies with MCC in 1929-30, and played First-Class cricket till 1933, scoring 7 and effecting 2 dismissals in his final match for Free Foresters against Oxford University.

His book, Wicketkeeping, was published in 1935. He also served England in World War II in the 21st Lancers as Aide de Camp to General Alan Brooke and as GSO1 21st Army Group 1941 — 1945. He later became a trustee of MCC — a post that he held till his death.

Lt Col Stanyforth passed away at Kirk Hammerton Hall on February 20, 1964. He was 71. An extremely popular man, he was mourned by many, including his former teammates.

Peebles wrote: “Wherever he went he had a most unusual quality of commanding respect as well as deep affection. It is pleasant to record that when he revisited South Africa in recent years he received a welcome which greatly moved and delighted him. Those who, as young men, travelled with him on his original visit have special cause to mourn.” 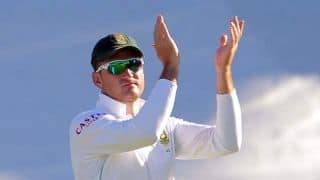