Madhav Apte played 7 Tests in 5 months, scored a hundred and 3 fifties, all in West Indies; he averaged 49.27, and was never picked again. He is also the only known cricketer to have played alongside DB Deodhar and Sachin Tendulkar.

Madhav Apte, born October 5, 1932, boasts perhaps the most bizarre Test career for India. In a span of five months, he played seven Tests, and averaged 49.27 as an opener, with a hundred and 3 fifties — all scored in the West Indies. After that, he was dropped for some unknown reason and never played another Test. Arunabha Sengupta looks back at the man who played his first Ranji Trophy match as a replacement for Vijay Merchant and some three-and–a-half decades later faced a 14-year-old Sachin Tendulkar on the field.

Gerry Gomez struck again. In the first innings at the Queen’s Park Oval, Gomez had bowled him for a duck. And now, in the second knock, the young Indian opener watched from the non-striker’s end as the local all-rounder got Pankaj Roy for a duck.

It was the fourth afternoon of the six-day Test. The first-innings deficit was just 36, but soon Gulabrai Ramchand and Vijay Manjrekar departed for next to nothing, leaving India on 10 for 3. The West Indian bowling was rather formidable. In the first innings Frank King, sharing the new ball with Gomez, had sent Indian wicketkeeper Ebrahim Maka to the hospital with two broken bones in his left arm. Lurking in wait were Sonny Ramadhin and Alf Valentine, perhaps glad that the match had been shifted to a spin friendly Port of Spain because of floods in Georgetown. The wily Frank Worrell played the role of the fifth bowler. Defeat loomed large in front as two-and-a-half days stretched ahead.

But, 20-year-old Madhav Apte put his head down and hung in there. He was joined at the other end by Polly Umrigar, in the midst of a fantastic purple patch. The two of them batted till the close of play. By the end of the day, Apte had reached 60, and India finished on 118 for 3.

The following morning the West Indians started afresh. Two full days were yet to be played, and the match was far from safe. At 145, Umrigar was smartly stumped off Valentine.

However, in the sagacious company of captain Vijay Hazare, Apte carried on. Soon, he was on 99 and Gomez was bowling to him. The one remaining run seemed elusive and the anxious youth became increasingly edgy. And then he heard the voice of Worrell from the slips, “Cool it, young man. Don’t throw away your innings. Have patience.” Apte took heed and the century was brought up with calm assurance.

At 209, Hazare was out leg-before to Worrell. And almost immediately, Jayasinghrao Ghorpade was run out. After all Apte’s hard work, the Indians looked like losing the plot yet again. The wicket was true and the lead was just 173 with six wickets down.

But, walking out into the middle was the great Vinoo Mankad. He knew Apte well enough. The legendary all-rounder had been the coach at Elphinstone College where Apte pursued his degree. When the young man had made his Test debut a few months back, Mankad had walked out to open the innings with him. Now, he approached his protégé and said in Gujarati, “Deekra tu khali ubho re, hoon runs kari laish” (You just hang in here, and leave it to me to score the runs).

Apte did exactly that. It was after lunch on the final day that Mankad was run out for 96. The innings was closed at 362 for 7. Apte was still there, unbeaten on 163. The match had been saved.

Apte finished the tour with 460 runs at 51.11 with a hundred and 3 fifties. He came back as one of the most promising stars on the horizon of Indian cricket.

And he never played another Test for India. His international career ended with seven Tests, 542 runs at 49.27. There was no debilitating injury, no mystery illness, no break for education or any other standard rational explanation. For some reason that still remains baffling, he just wasn’t picked.

That winter of 1953, a strong Silver Jubilee Overseas Cricket (SJOC) Commonwealth side visited India. Led by Ben Barnett, the team was made up of Worrell, Jack Iverson, Peter Loader, Sam Loxton, Reggie Simpson, Roy Marshall, Sonny Ramadhin, Jack Crapp and other renowned names. Apte played the first ‘Test’ at Delhi, and opened the innings with Roy. He scored 30 in India’s only innings as Subhash Gupte and Ghulam Ahmed spun the visitors out twice to inflict an innings defeat.

After that Apte was dropped. The selectors went on a mind-numbingly crazy spree about the top two slots. Mankad opened at Bombay with Naren Tamhane, who had never even gone in first for his club. Mankad was accompanied by Umrigar partnering in the second innings. At Calcutta, Hemu Adhikari started the innings with Roy. At Madras, Roy opened with wicketkeeper Krishnaswami Srinivasan. And in the final ‘Test’ at Lucknow, it was Pananmal Punjabi who walked in with Roy. And in this farcical game of musical chairs, Apte found himself left out without much in the way of explanation.

Apte continued to play First-Class cricket for another decade and half, with plenty of distinction. But, he was never recalled to the Indian side. His miniature career lasted five months and continues to be a befuddling puzzle for every student of Indian cricket history.

With Mankad and Merchant

Hailing from an affluent Bombay family, Apte first made headlines in school cricket with 10 wickets for 10 runs against Robert Money High School in the Giles Shield. It was also as a bowler that he caught the eye of Mankad.

As mentioned, he was attending Elphinstone College where Mankad was appointed cricket coach. On the star Indian cricketer’s first day, young Apte was the first to reach the ground. The new coach took a look at the earnest, eager student and asked him to bowl to him. Intent on impressing the great all-rounder, Apte ran in and sent down a googly. Mankad missed it and was bowled.

Much of Mankad’s coaching consisted of asking his pupils to stand behind the net and watch Merchant have a hit. A few days later he asked Apte whether he would like to open the innings. The young batsman readily agreed. In his first Rohinton Baria game for Bombay University against Baroda University in late 1950, Apte batted at the top of the order, scoring 31 and 60 not out.

In October 1951, he was picked for the Indian Universities against the visiting England side and scored 27 after opening the innings with Roy. A month later, Merchant injured himself attempting a catch in his last Test match at Delhi. And later, at the nets, he found he had not quite recovered in time for the next Ranji encounter. Apte was drafted into the Bombay side as the opener against Saurashtra.

Walking in those huge shoes, he scored 108 on debut. Merchant, the man he had keenly watched while perfecting his technique, remarked that a young opener of talent had arrived on the scene and he was no longer needed to turn out for Bombay. No commendation could have been higher for this bright-eyed youngster.

A month later, he had hit a hundred for Bombay University against Baroda University in the Rohinton Baria Cup. And runs continued to flow in the Ranji Trophy with a couple of nineties against Gujarat and Holkar.

His excellent performances had propelled him into reckoning when the Indian side was being chosen for the tour of England in the summer of 1952. However, ultimately he did not make it to the side. Yet, Merchant approached his parents, advising them to send him to England with the Indian team. He could watch the action, pick up vital lessons, and also be at hand in the case of any injury; Apte’s family agreed. The young man toured with the national side, and was seated in the scorers’ box as he watched Mankad score his famous hundred at Lord’s.

The tour was a disaster with the pace of Freddie Trueman proving too hot for the Indian batsmen. So, by the time the Pakistanis had come over for their first ever tour of India in late 1952, the selectors were looking for fresh blood.

Soon, barely 20, he was walking out with his erstwhile coach Mankad to open the innings for India against Pakistan at the Brabourne Stadium. The first-wicket stand produced 55. Apte impressed with 30 before edging Mahmood Hussain to Imtiaz Ahmed. In the second innings he was at the wicket when the winning runs were hit. The following Test saw him scoring 42 and he was an automatic choice for the tour to West Indies that followed immediately afterwards.

He went to the Caribbean islands for his few remaining days in the sun. And then the inexplicable occurred. After the superb tour, he never played for India again.

The joy of cricket

After being ignored by the selectors, Apte joined his family business while continuing to represent Bombay for many, many years, playing his last match in 1968. Not that he was always among runs, his next century in First-Class cricket after the 163 at Trinidad came only in early 1959 against Services.

However, with his brilliant fledgling Test career cut short without a plausible justification, Apte for long expected a recall to the side. With time the hope died out, but his enthusiasm for the game did not. Apte played a leading role in many a Bombay triumph and even led the side in the Ranji Trophy, although more as a caretaker captain than a regular one. In his 17-year career, he played 67 First-Class games in all, scoring 3,336 runs at 38.79 with 6 hundreds and 16 fifties.

He was also a regular feature in Bombay’s traditional Kanga League. In fact, Apte continued to appear in the league long after playing his last First-Class game in February 1968. The historic Bombay tournament saw his ageing, yet fit, form walking out to bat for over half a century. He would generally carry a trademark Stuart Surridge bat, while on his head would perch the Harlequin cap. He wore the cap religiously ever since becoming a member of the MCC.

In the 1987-88 season, a 55-year-old Apte turned out for Cricket Club of India (CCI) in the Purshottam Shield at Shivaji Park Gymkhana. One of the sprightly young boys turning out against him had baby cheeks and a head full of curly hair. Yes, Apte did play against the 14-year-old Sachin Tendulkar. Later, as the president of CCI, he was instrumental in bending the rules of the dressing-room and allowing a 15-year-old Tendulkar become a playing member of the club.

Apte also actively played tennis, squash and badminton. His entire family had a fascination for sports. Brother Arvind was also an opening batsman who played 58 First-Class matches for Bombay and Rajasthan and turned out for India in one solitary Test at Leeds in 1959. Son Vaman represented India in squash and Bombay University in cricket. His daughter was an inter-school badminton champion as well. The sport-loving family owns a flat near Lord’s and can often be witnessed crossing the road to the ground to watch the cricket on offer.

Apte was appointed Sheriff of Mumbai and in 2000 was persuaded by Sharad Pawar to head the Mumbai Cricket Association’s first Cricket Improvement Committee.

Even in his eighties, Apte remains razor sharp and incredibly fit, still indulging in regular games of badminton. 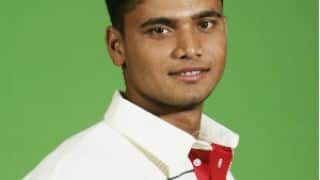