Baig and Umrigar's fighting centuries stood out despite losing the Test by 171 runs.

In this 16 part series, Arunabha Sengupta captures one special moment from each of the 16 previous Indian tours to England. In the fifth episode he looks back at the Manchester Test of 1959 which saw India attempt the impossible of chasing 548.

The Indians were being slaughtered mercilessly. Of the three preceding Tests, they had lost two by an innings and the other by eight wickets. The batsmen had managed just three fifties between them in the six full innings. By the time the series moved to Old Trafford, they were dismissed as the dull dogs of cricket.

When they finished the second day at 127 for six replying to England s 490, another tedious one sided rout was on the cards. But, there was some compassion in the offing from the most charming man in the cricket world the England captain for the match Colin Cowdrey.

Cowdrey had been almost a non-starter for the Test. With the series already in the bag, he had been rested along with Brian Close and Allan Moss. However, a last minute illness to Peter May the captain eventually had to undergo an operation during the Test it prompted Cowdrey s recall to lead the side. And when India were struggling towards another innings defeat at the end of the second day, he promised that in view of the great weather and the holidays in Manchester the following week he would not enforce the follow-on even if he was handed the opportunity.

And he kept his word. India finished on 208. Ken Barrington s scarcely used leg-spin accounting for three wickets, the balls turning from perfect length with an excellent googly thrown in from time to time. The hint of respectability was provided by Chandu Borde, whose Lancashire League experience stood him in good stead as he drove and pulled his way to 75.The visitors thus ended 282 behind the mammoth England first innings total amassed with the help of centuries by Geoff Pullar and MJK Smith. And England went in again, spending the rest of the third day scoring 265 for the loss of eight wickets taking the lead to 547 with the help of some sterling strokeplay by Ted Dexter and Barrington.

Cowdrey declared at the overnight score, leaving India two full days to get the runs.

The response was unexpected and sprightly. It was young Abbas Ali Baig who set the tone. The 20-year-old Cambridge man, making his debut for India, came in at No 3 and struck the ball delightfully.Getting right behind the line of the ball, he seemed to have immense time to play his delectable drives, cuts and hooks. At the other end the left-handed Nari Contractor was fluent as well and at long last Fred Trueman looked less than threatening.

The second wicket stand amounted to 109. Derbyshire paceman Harold Rhodes dismissed Contractor and skipper Datta Gaekwad in quick succession, but Polly Umrigar entered to exorcise the English demons that had for so long riddled his game. The Indians seemed to be cruising at 173 for three.

At this juncture a bouncer from Rhodes struck Baig on the right temple. The young man was on 85 as he was led off from the ground, tottering from the blow. Even the Manchester crowd sympathised. The boy deserved his hundred. Would he recover in time? Or could the Indian innings hold till he did get better?

The Indians in the meanwhile were displaying the long absent traits of tenacity and character. Borde did not last too long this time, but Umrigar and Bapu Nadkarni put their heads down to bat till the end of the fourth day. The score read 236 for four.

The final day dawned with the Indians clinging to the slimmest hope of performing a miracle. There was good news in their camp. When Nadkarni fell to Trueman, Baig walked in to resume his innings amidst some admiring applause. Rhodes greeted him with a bouncer, but the debutant stood firm. A barrage of short pitched bowling and a packed leg field did not disturb his poise.

Slowly the rookie batsman inched towards his ton. At 96, he scratched around for almost half an hour, tense and tentative at the crease. And then Rhodes banged another in and it was dispatched to the leg boundary to bring up the debut century. The crowd cheered and the England team joined in. At the end of the over, Cowdrey shook the lad by his hand as he crossed over to the slip at the other end.

Meanwhile, Umrigar was at last demonstrating to the English crowd what a splendid player he actually was. With the runs coming easily enough, the thought of victory was never far from the minds of the two batsmen. Sharp singles were scampered, and as the score crossed 300, the idea of a win did not seem too far-fetched.

And then tragedy struck. At 321, Baig pulled off-spinner John Mortimore. To the batsman, the ball seemed to beat Dexter at mid-on. He ran down the pitch and only then realised that it had in fact been a splendid stop. By the time he turned, Roy Swetman was already removing the bails. His superb innings of 112 came to an end. Umrigar was still there on 94.

Soon Nana Joshi was castled by Ray Illingworth. The Bombay stalwart was stranded with only his elusive hundred in England egging him on. He duly got it and, and after that there was too much time left in the match for forcing a draw and too few wickets to gun for a win. With the field spread far and wide to allow him easy singles, Umrigar took the easy way out by charging Barrington. He holed out to extra cover with the score on 358. The remaining two wickets managed 18 more before Trueman ended it all by knocking over Subhash Gupte s stumps.

England won with more than three hours to spare, but the match had at last managed to produce some drama and a semblance of a contest. 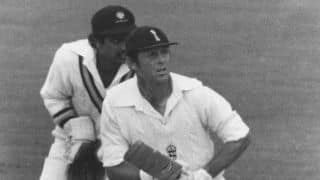