Bhagwath Chandrasekhar spun his web around the English batsmen in the second innings.

In this 16 part series, Arunabha Sengupta captures one special moment from each of the 16 previous Indian tours to England. In the seventh episode, he looks back at the express delivery from Bhagwath Chandrasekhar that dismissed John Edrich and virtually won the Oval Test of 1971.

Bhagwath Chandrasekhar spun his web to trap the second English innings before it could take off.

After securing a lead of 71, the home batsmen had started confidently enough. The score read 23 for no loss a few minutes before lunch. And then the ingenious leggie struck.

The first strike was not exactly with the turning ball. Brian Luckhurst drove him hard and Chandrasekhar, attempting to stop it, deflected the ball on to the stumps, catching John Jameson short of his ground.

That summer the outstanding middle-distance racehorse was Mill Riff. The USA-born UK-trained three-year-old thoroughbred had won the Epsom Derbyat in a canter, beating Linden Tree by two lengths. Chandrasekhar’s explosive faster ball had been aptly named after the noble animal. As he walked back to his mark, several of his teammates urged him to let go a Mill Riff. And he ran in and ripped one through. John Edrich’s bat was still in the air when the ball hit the stumps.

The very next delivery saw Keith Fletcher gobbled up by Eknath Solkar at short-leg. Lunch was taken at this juncture with England on 24 for three.

The blessings of Ganesha

During the break, the action in the middle remained more than ample. Bella, a three-year old elephant, plodded around the outfield of The Oval, regaling the crowd. It was a curious way of celebrating Ganesha Chaturthi,the occasion happily coinciding with the match. The gentle animal had been loaned from the Chessington Zoo.

Blessings from the god seemed to pour forth after the break. One after another the impediments on the way to an Indian victory were removed. The English innings folded for 101 in another hour and forty minutes. Wadekar crowded the bat with a battery of close in fielders and the English batsmen obliged with snicks and edges, the highlight being Solkar’s famous full length dive to dismiss Alan Knott off Srinivas Venkataraghavan.

Chandrasekhar finished with six for 38 from 18 overs — one of the greatest spells by an Indian spinner bowling abroad. Playfair Cricket Monthly waxed eloquent about his performance, “On a pitch which gave him little if any assistance Chandra [Chandrasekhar] had vindicated a vanishing breed of bowling in a fashion which can only be described as astonishing.”

Needing 173 to win, India started disastrously. Sunil Gavaskar had been involved in the infamous collision with John Snow in the first Test — the fast bowler was dropped as a result of the incident from the second. In the third and final Test, Snow had returned with a vengeance. Gavaskar had lost his stump to the pacer for six in the first innings. Now, he was trapped plumb by an express delivery without troubling the scorers.

However, Ashok Mankad put his head down and batted longer than he had done in the entire series, spending 74 vital minutes at the wicket for 11 runs. Wadekar and Dilip Sardesai saw the visitors through till stumps, India ending on 76 for two.

The captain did not last long the following morning. Rather unwisely, Wadekar took on the arm of Basil D’Olivera at cover, and was run out in the first over of the day. The breach, though, was soon sealed by the arrival of Gundappa Viswanath. The English skipper, Ray Illingworth, tried to recreate the magic of the Indian spinners by bowling in tandem with Derek Underwood, but they were not nearly as effective

Underwood did create a few hiccups by snaring Sardesai at 124, and getting Solkar to hit one back to him ten runs later. But, Farokh Engineer and Viswanath calmly proceeded towards the target, sprinkling the defensive approach with a few attacking hits. India was within a stroke from victory when Viswanath edged one from part-timer Luckhurst.

It was left to Abid Ali to finish the match with a square-cut. With the Indian supporters sprinting in to celebrate almost as soon as it had left the bat, the speeding ball did not quite reach the fence.

Legend has it that Ken Barrington, the manager of the English team, was the first to enter the Indian dressing room to congratulate the victorious captain, only to find him snoring away. He nudged Wadekar awake to give him the good news. Wadekar recalls, “I said to him that I always knew we’d win.” 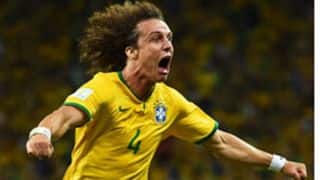 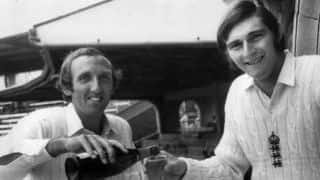