From contemporary accounts, it seems that Mahadevan Sathasivam was a flamboyant character, with a decided playboy image.

“I have bowled at Bradman, Harvey, Hutton, Denis Compton, Keith Miller, The Terrible Ws — Weekes, Worrell and Walcott. If you ask me who is the most difficult batsman that I have ever bowled to, I will mention a name that you (may) not know.” This was Ghulam Ahmed, the accomplished Test spinner and former Indian captain speaking about a visiting batsman, adding, “He is M Sathasivam of Ceylon. I will never forget how he thrashed me in Chennai.”

The match in question was the encounter between Southern India and Ceylon Cricket Association, played at Chepauk in February 1947. Ceylon batted first and put up 521 for 7 at the rate of 3.87 runs per over. Mahadevan Sathasivam himself contributed 215 (from 248 minutes with 24 fours). The other major scorers were opener M Makkin Salih (98), captain Bertram Heyn (66) and SS Jayawickreme (52). In his 34 overs, the usually parsimonious Ghulam had figures of nought for 105 with no maiden. READ: Don Bradman and his Ceylon expeditions

Well, one can commiserate with Ghulam about this batting display but one cannot, perhaps, fault his judgment about the quality of his adversary. At stumps on Day One, Ceylon were 368 for 3 with Sathasivam batting on 134 not out. To complete the story of the match, Southern India scored 197 and, following on, 210, the visiting team winning by an innings and 114 runs. This was to be the second epic innings, out of three that Sathasivam was to play in his First-Class career.

Who, then, was the man that had put the opposition bowling (with such luminaries as MJ Gopalan, Commandur Rangachari, Ghulam, NJ Venkatesan, BC Alva, captain Conrad Johnstone, and Benjamin Frank) to the sword in such a merciless and cavalier fashion?

Mahadevan Sathasivam, fondly known as “Satha” to one and all, was born on October 18, 1915 in Ceylon. A right-hand bat, he had a relatively short First-Class span, from 1944-45 to 1949-50. He played only 11 First-Class matches, scoring 753 runs from 18 innings, with a highest of 215 (mentioned above) and an average of 41.83. He had 3 centuries and 3 fifties. Mahela Jayawardene: Unruffled elegance in the face of adversity

Sathasivam began his cricketing career at the age of about 15 years at St Joseph’s College and Wesley College, Colombo, for whom he scored 142 against St Thomas College, Mt Lavinia, in his last season. His First-Class debut had a modicum of drama and misunderstanding, perhaps even a suspicion of subterfuge, about it. The Bombay Pentangular Tournament semi-final of 1944-45 was played between Muslims and Rest.

The Rest team was led by Vijay Hazare, a Christian, and included in its ranks the debutant, Mahadevan Sathasivam, a Hindu. As a Hindu by religious affiliation, under the prevalent protocol, he should have been ineligible to represent The Rest in the Pentangular Tournament, the Hindus having their own team. The Rest team normally consisted of Indian Christians and Anglo-Indians and was usually selected by the Catholic Gymkhana of Bombay. On this occasion, the Catholic Gymkhana were under the (wrong) impression that the Ceylonese Sathasivam was a Christian with a Hindu name, like Hazare, and so included him in the team. The mistake was discovered much later.

Hazare won the toss and opted to bat first, himself scoring 69 in a team total of 308. The fortuitous debutant, however, trumped his skipper with a well-compiled 101 in 169 minutes with 7 fours, thus joining the list of batsmen who have scored centuries on their First-Class debuts. For the Muslims, of the 9 bowlers pressed into service in the innings, Khwaja Saeed Ahmed took 4 for 60. Michael Tissera: The man who gave his name to West Indies-Sri Lanka Test series

The Muslims replied with a vigorous 378 for 7 wickets declared, with centuries from Gul Mohammad (106) and Ebbu Ghazali (108). Hazare picked up 3 for 76. When time ran out in the drawn match, Rest had scored 66 for 6 in 40 overs in their 2nd innings. Our debutant was dismissed for a duck in the 2nd innings, dismissed by Abdul Hafeez Kardar, who would later play Test cricket for both India and Pakistan, becoming the first Test captain of the latter team. The eventful journey had begun.

Sathasivam was to play the first of his three epic innings in a match for Ceylon against India at Colombo in 1944-45. There was no play on the first day. Vijay Merchant, captaining the Indian team, put the hosts in to bat. They put up a pathetic 107, Ryle de Soysa top-scoring with 38. Sathasivam scored 10. Vinoo Mankad was in superb bowling form, taking 8 for 35, with Shute Banerjee picking up 2 for 13.

In response, India were bowled out for 179, Mushtaq Ali top-scoring with 49, followed by 48 by wicketkeeper BB Nimbalkar and 36 by the skipper, opening the innings. For the hosts, Robert de Kretser, making his First-Class debut, took 4/56. Asanka Gurusinha: A gritty, technically sound batsman and anchor of Sri Lankan batting

In the incomplete Ceylon 2nd innings of 225 for 7, Sathasivam scored 111. Considering that the century was scored against really fine bowlers like Lala Amarnath, Banerjee, Commandur Rangachari, CS Nayudu and Mankad himself, this was an effort much-appreciated even by the Indian team, Merchant paying a visit to the home dressing-room at the end of the game to present Sathasivam with a stump “in appreciation for a really fine innings”.

The third major innings came against a Commonwealth XI, at Colombo on in February 1950. Led by “Jock” Livingston of New South Wales, the Commonwealth XI was a fairly strong unit. Livingston won the toss and took first strike. His top-order batsmen pitched in to post a competitive 355 for 5, former Test cricketer Winston Place scoring 96 and Worrell hitting 77.

Ceylon could only muster 153 in the 1st innings, the cornerstone of the total being 96 by Sathasivam (an interesting coincidence that the top-scorers of both teams would have identical scores in their respective first innings).

Following on, Ceylon were dismissed for 151 to lose by an innings and 51 runs. The Press went to town about this knock of 96 by the local hero, his third epic innings. It was reported that Worrell had led the applause as Sathasivam had walked back to the pavilion after this knock. It was also reported that Worrell was reputed to have remarked that if he were asked to choose a World XI, “Sathasivam of Ceylon” would be the first choice – high praise indeed from a man known to be very temperate with his words.

Sathasivam’s last First-Class match was played at Lahore for Ceylon against Pakistan, in March 1950, a match that the hosts won by an innings and 45 runs. Ceylon captain SS Jayawickreme won the toss and put the hosts in. Pakistan scored 362 as Imtiaz Ahmed hit 127 and Asghar Ali 73, while Gamini Goonesena took 4 for 99. READ: Muttiah Muralitharan’s batting world record!

From contemporary accounts, it seems that Sathasivam was a flamboyant character, with a decided playboy image, who liked to party through the night. Historian Michael Roberts, echoing views of some of his fellow players, is of the opinion that “Satha was a hopeless fielder, never chased a ball, dropped catches and all because for most of the time he was drunk.”

Well, that would be a matter of opinion, perhaps. What is known, however, is that his wife had filed divorce proceedings against him on grounds of infidelity.

He was involved in an imbroglio over the murder of his wife, Anandan Sathasivam, and was remanded in judicial custody for 625 days. His trial lasted 57 days. Sathasivam was ultimately exonerated of any blame for the crime and was released from jail. The bad publicity of this sorry personal event in his life prompted him to leave Ceylon and settle in Singapore and Malaysia in later life.

On July 9, 1977, the man who was reputed to have scored 40 centuries and 4 double-centuries in all grades of cricket passed away in Colombo of a heart attack. He would later find a mention in Shehan Karunatilaka’s masterpiece Chinaman. 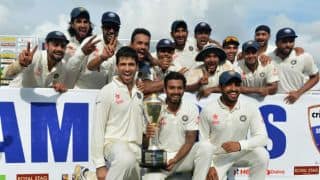