The Chennai Super Kings (CSK) had a lot to prove in Wednesday’s eliminator against the Mumbai Indians (MI). Thanks to Deccan Chargers’ (DC) heroics against the Royal Challengers of Bangalore (RCB), they made a backdoor entry after almost getting knocked out of the tournament. 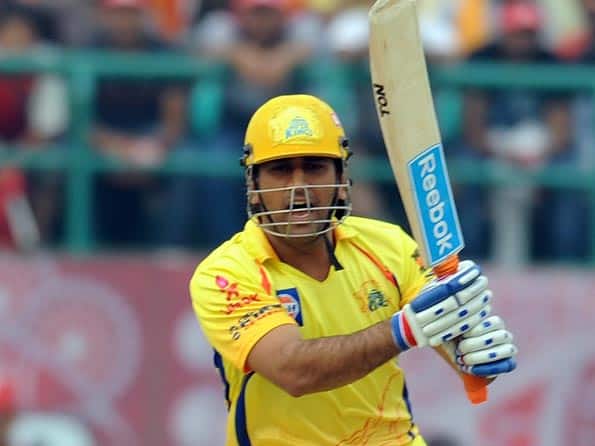 That’s the way, Mahi way… When the going gets tough, Dhoni gets going © AFP

The Chennai Super Kings (CSK) had a lot to prove in Wednesday’s eliminator against the Mumbai Indians (MI). Thanks to Deccan Chargers’ (DC) heroics against the Royal Challengers of Bangalore (RCB), they made a backdoor entry after almost getting knocked out of the tournament. One cannot deny that CSK’s triumphs during the initial stages of the tournament helped them stay afloat, despite losing steam towards the end. Now that they somehow qualified, it’s important for them to justify their spot in the play-offs.

As has been the case since the last four editions of the Indian Premier League (IPL), the Men in Yellow raised their game yet again when it mattered most. The man who led the assault alongside Michael Hussey was skipper Mahendra Singh Dhoni. Contrary to popular perception, it isn’t luck that has been favouring Dhoni or CSK since the last few seasons. On a much closer look, one can deduce the fact that Dhoni has been CSK’s go-to man during crucial matches. His knock against the Mumbai Indians on Wednesday was not the first time that Dhoni has delivered in a do-or-die situation. Since the last five seasons, he has often managed to steer his side out of troubled waters; either by leading the attack or by playing second-fiddle and building partnerships during high-priority matches.

Below are few such instances of his performance in crucial games:

This was the 54th match of the first edition of the IPL. After a string of consecutive victories in the early days of the tournament, CSK lost its way in the middle and needed to win majority of their games towards the ending stages. Despite having match-winners at its disposal, DC remained victory-starved throughout the competition. They nevertheless were looking to end on a high. But Chennai had different plans. They restricted DC to just 147, before Dhoni and Suresh Raina made mincemeat of DC’s bowling attack.

Dhoni bludgeoned 37 of just 25 balls, inclusive of four boundaries and a six. This victory ensured that CSK instantly qualified for the knock-outs. Had CSK not passed the DC test, they would have lost their spot in the semis to the Mumbai Indians.

Coincidentally, this too was the 54th match of IPL 3. CSK found themselves in a spot of bother as they desperately needed a victory to qualify for the playoffs. Compounding their worries was the fact that Kings XI Punjab (KXIP) had posted a mammoth 192 on the board after batting first. Scoring consistently at 9.65 runs an over was always going to be an arduous task, but CSK managed to keep up with scoring rate for a major part.

When Dhoni walked in to bat, the asking rate was almost 10 runs per over. He and Subramaniam Badrinath steadied the ship, but the latter was dismissed when 45 runs were still required of just 21 balls. Dhoni and Albie Morkel then tried to consolidate, and the target for the last over was eventually 16. Not many knew that this would turn out to be one of the most memorable moments for CSK and Dhoni in the IPL, as the skipper went on to belt Irfan Pathan to all corners of the ground and achieve the target with two balls to spare.

The world got to see a side of Dhoni that was never seen before. “It was an emotional moment. Your franchise pays so much money for you. You should at least make the semi-finals. After that you can say it is a lottery,” Dhoni said after the match.

CSK eventually went on to win the IPL that season for the first time. Dhoni scored a brisk 22 off 15 balls in the final and propelled Chennai to a healthy 168 against MI.

A score of 29 and 22 usually doesn’t deserve a mention, but the situation demanded just such kind of an innings from the skipper in the 1stqualifier and the final of the 2011 IPL respectively. The 1st qualifier at the Wankhede Stadium saw RCB bat first and set a target of 176 for CSK to chase. Having lost two early wickets, CSK consolidated well as Raina and Badrinath brought them closer to victory. Once Badrinath was dismissed, it was important for someone to score from the moment they walked in to bat such that the required run rate didn’t go beyond reach. Dhoni obliged, 29 from just 19 balls, before Albie Morkel did the job of a finisher to help CSK reach its third final.

In the final, Michael Hussey and Murali Vijay were unstoppable. An opening stand of 159 in just 15 overs sucked away hope from the opposition. Dhoni came and smashed a quick-fire 22 of 13 balls that helped Chennai post a huge 205 on the board. CSK eventually won that game by 58 runs, thereby bagging their second consecutive IPL trophy.

Although it was an eliminator, CSK played as though they had nothing to lose coming into this match. Dhoni made his intentions clear from the moment he walked out to bat. He scored his first 20 runs in just seven balls, and didn’t even spare a bowler of Lasith Malinga’s calibre. Hussey and Badrinath too made significant contributions, but were simply overshadowed by Dhoni’s brilliance. Like James Franklin mentioned, it appeared as though the MI bowlers found it impossible to bowl to Dhoni.

Such is the zone Dhoni is capable of getting into during crucial games. He has proved it time and again that he performs best under pressure. Just like Dhoni, CSK too have earned a reputation for themselves as big-match players. Looking at CSK’s past record, one gets a feeling that they are favourites to win the coveted trophy this time around as well. After all, it shouldn’t come as a surprise that the team that handles pressure extremely well is most likely going to succeed in this abridged version of the game.