People may consider Mahendra Singh Dhoni as the luckiest captain, but it isn't fate alone that takes him to his ultimate goal. In the last few years, he has shown the guts to take brave decisions. And as the famous saying goes, "Fortune favours the brave." Nishad Pai Vaidya focuses on the Dhoni enigma and looks forward to the upcoming play-offs. 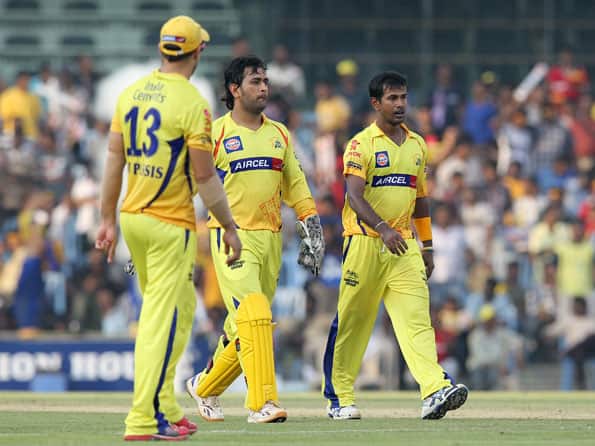 MS Dhonis (céntre) calm temperament would always be an asset, but now is the time his players need to respond © AFP

People may consider Mahendra Singh Dhoni as the luckiest captain, but it isn’t fate alone that takes him to his ultimate goal. In the last few years, he has shown the guts to take brave decisions. And as the famous saying goes, “Fortune favours the brave.”

Nishad Pai Vaidya focuses on the Dhoni enigma and looks forward to the upcoming play-offs.

The most fascinating and intriguing league phase of all the Indian Premier Leagues (IPL) reached a thrilling finish. Who would have thought that the formidable Royal Challengers Bangalore would falter chasing 133 against the Deccan Chargers! As a result, in the words of a famous commentator, “destiny’s child” Mahendra Singh Dhoni gets another crack at the IPL trophy as captain of the Chennai Super Kings.

One cannot attribute everything to Dhoni’s luck. It’s said “fortune favours the brave” and Dhoni has taken shockingly bold decisions. Be it handing the ball to Joginder Sharma to bowl the final over of the ICC World T20 2007 final or promoting himself up the order during the World Cup final last year, Dhoni has been a gambler of sorts. He has had the guts and character to make such moves and the confidence he instills in the team has worked wonders. If he had all the luck in the world, India would have made it to the finals of the recent Commonwealth Bank series Down Under and the Asia Cup in Bangladesh – which ultimately boiled down to the other results in the competition. Thus, it isn’t luck alone, but character that takes one through.

Chennai now have to put their head down and aim to change things in the play-offs. During the last two tournaments, Champions League T20 (CLT20) and the IPL 2012, they haven’t been their dominant and clinical selves as they have lost their stronghold over the MA Chidambaram Stadium. The biggest problem during their ongoing campaign is that their batsmen haven’t got the big runs consistently. In 16 games, they have recorded only five fifties, three of which belong to Faf du Plessis. On the bowling front, their spinners haven’t been the same force they were in the past season. In fact, Ben Hilfenhaus is the only player who seems to be in wicket-taking form. Most of their bowlers have been economical, but wickets have been hard to come by.

Dhoni’s calm temperament would always be an asset, but now is the time his players need to respond. Fate has bestowed an opportunity that was hard to come by and they have to grab it with both hands. If needed, Chennai may have to consider a few brave moves and add a different dimension to their line-up. It wouldn’t be easy considering the four foreign players who are sure shots in the line-up. The absence of a quality Indian pacer may also be a major factor in a bit of a rigid gameplan of banking on spin.

The inconsistent Mumbai Indians would be Chennai’s opponents in the Eliminator – an even contest considering their performances this season. While Mumbai’s qualification was more comfortable when compared to Chennai, they have been very erratic throughout the tournament. There have been numerous close finishes which went their way, but there were a few games during which they didn’t even come close to winning. Their latest victory was a rare comprehensive victory – one that would give them immense confidence. It is tough to choose between Chennai and Mumbai as the chinks in the armour may come to haunt them anytime.

At the business end of the tournament, Mumbai still haven’t found a set opening pair which is very astonishing. As discussed in a previous article, written after the Kolkata Kinght Riders- Mumbai Indians game, it was too early to say that they found their opener following Herschelle Gibbs’ success. One couldn’t fathom the logic of resting him in the game against Rajasthan Royals as he hasn’t played too many games this season. It shows that Mumbai haven’t learned from their mistakes as they are hell bent on creating the same instability.

Dwayne Smith’s knock was a welcome success but it creates an unwanted problem as Mumbai would be in a fix before their next game. Would they bring in Gibbs or persist with Smith at the top after one success? Smith is the fourth Mumbai player during this season who has done well in his first outing as opener. It is a repetitive cycle that Mumbai have created and it inevitably creates a problem at the top.

A look at the teams that qualified for the play-offs would reflect that there is a huge difference between the top two and numbers three and four. In terms of performance and consistency, Kolkata Knight Riders and Delhi Daredevils have been far more dominant when compared to Mumbai and Chennai. It is fair that they are the top two and get another chance to qualify for the final in case they lose on the first attempt.

Delhi’s success has been a result of complete team-work as different players have stepped up in the need of the hour. Although, they lost Kevin Pietersen, their batting still remains formidable with Virender Sehwag, David Warner, Mahela Jayawardene and Ross Taylor forming the crux. Also, as TA Sekhar pointed out in his article, Delhi have good Indian batsmen and one can see that quality in Naman Ojha and Y Venugopal Rao. On the bowling front, Morne Morkel has been sensational and has found good support in Umesh Yadav and the fit Varun Aaron.

Kolkata’s trump cards have been Gautam Gambhir and Sunil Narine. While Narine has found good support from the other bowlers, Gambhir continues to hold the aces as far as the batting is concerned.

The play-offs have a very interesting line-up as the power-packed Delhi are up against an inspired Kolkata. On the other hand, the “Destiny’s child” would be up against the formidable but inconsistent Mumbai. Make your pick – wisely!