I could not understand this state of mind of a team which had humiliated their opponents to win all three Tests played thus far in the series. David Warner, who has donned the unofficial title of the team spokesperson, gave me a nod to signify "It’s really serious". 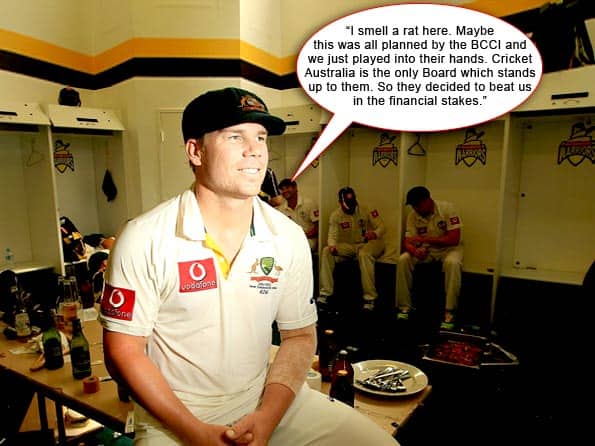 Out of sheer habit, I was hanging around the dressing room of the two teams. I was quite sure I would get nothing but brickbats from the Indian team, considering the foul mood they were in. But I was wrong! In fact, it was the Australians who were in a nasty mood. I could not understand this state of mind of a team which had humiliated their opponents to win all three Tests played thus far in the series. David Warner, who has donned the unofficial title of the team spokesperson, gave me a nod to signify “It’s really serious”.

Michael Clarke started off “Mates, I am proud of you as a team. We have destroyed the aura of the great Indian batting. But I have some bad news.” After a dramatic pause he continued, “It appears that we beat them too quickly. Cricket Australia did not get any revenues and is in financial doldrums. So we will be getting only 10% of our pay cheques”.

“You cannot be serious,” yelled Brad Haddin in his best John McEnroe impression.

“Am afraid, that’s how it is,” continued a dour Clarke. “India were expected to give us a run for our money (pun very much intended), but it just appeared that they were just not in the game. Am unable to explain and I just don’t understand this at all.”

“I smell a rat here” said David Warner. “Maybe this was all planned by the Board of Control for Cricket in India (BCCI) and we just played into their hands. Cricket Australia is the only Board which stands up to them. So they decided to beat us in the financial stakes.”

“Yeah, and trivial things like winning Test matches don’t have to get in their way,” chirped in Ricky Ponting. “Ever since I pushed that guy Sharad Pawar off stage, I’ve been dreading something like this. They say he is an astute politician and he never forgets. This series in India has been billed as the “Agneepath series“. My sources tell me that this is in reference to a movie which is all about revenge. I gotta admit, he’s got his revenge plan all right. This is payback time for the series when Anil Kumble captained India here.”

“Looks like they employed the age old tactic of draining someone’s finances to bring them down,” added Michael Hussey, looking completely morose. “And to add to that, they are not scheduled to play any Tests outside the subcontinent in the near future. All that nonsense about Sachin Tendulkar’s hundred was a complete decoy….Now what?”

“Well, we’ll just need to get India to bat five days in the next Test,” said Michael Clarke. “Maybe even let them win. I just need to figure out the right team combination for this. But I get a feeling that no matter what I do, the Indians will just wind things up in three days. They obviously enjoy go-karting more than cricket.”

At this point, as if on cue, Nathan Lyon and Ryan Harris jumped up. “Please play me!” said Lyon “The Indians are least threatened by me and Shane (Warne) has advised me on how to get nightmares bowling to them. I can take one for the team.”

“Also with us getting just 10% of our pay cheques, I should be played too,” added Harris. “We need to spread whatever little wealth we get, around.”

At this point I decided to politely leave. Perhaps anyone Indian was unwelcome in keeping with the current mood. I met Mahendra Singh Dhoni in the corridor grinning ear to ear. He gave me a knowing wink and said, “Mission Accomplished! Am off to the go-karting arena. Want to join me?”

With nothing much to do, I followed him in hopes of what might be another good story.