During the horrendous last season, Dhoni looked a different man. The usually cool and positive Dhoni made some bizarre decisions and crumbled. Nishad Pai Vaidya, however, feels Dhoni’s positive intent was unmistakable in India’s win against New Zealand at Hyderabad. 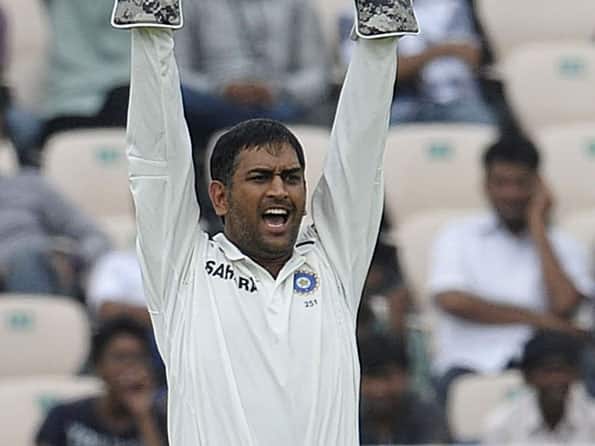 During the horrendous last season, captain Mahendra Singh Dhoni looked a different man. The usually cool and positive Dhoni made some bizarre decisions and crumbled. Nishad Pai Vaidya, however, feels Dhoni’s positive intent was unmistakable in India’s win against New Zealand at Hyderabad.

A new era for Indian cricket has started off with a comprehensive victory – albeit against a weaker opposition. Following the nightmares of the last season and the retirements of Rahul Dravid and VVS Laxman, India were expected to take cautions steps into a fresh beginning. Cheteshwar Pujara and Virat Kohli’s knocks presented hope that the transition wouldn’t be as laboured as expected, while Ravichandran Ashwin and Pragyan Ojha finished the job with the ball. However, captain Mahendra Singh Dhoni’s positive intent was the one that made the real difference – something that was conspicuous by its absence during the horrendous last season.

Some of the decisions Dhoni took during the 2011-12 season were in stark contrast to his nature. The usually fearless and calm customer didn’t seem too comfortable at the helm and took a few calls that weren’t termed positive by the critics. In the West Indies last year, the Indian team called off a run-chase with 86 runs to get with 15 overs remaining. Although there were strong arguments that justified the decision, majority of the jury wasn’t happy with the skipper of the then number one Test team.

From that setting in the Caribbean, India moved to England – where they would meet their ultimate and disastrous fall. On numerous occasions in England, Dhoni looked clueless and surprised everyone with his defensive approach. Some of his field placements were absolutely bizarre with men on the boundaries when the situation demanded them close in. When combined with all the other ingredients, it made the perfect recipe for disaster – one that saw India slip to two 0-4 defeats in England and Australia.

Fast forward to the recently-concluded Hyderabad Test and the Dhoni of the old seems to have made a comeback. When India bowled New Zealand out for 159 in the first innings – 279 runs behind the hosts – not many expected him to enforce the follow-on. Captains usually enforce the follow-on when there is a sizeable lead – something above the 300 mark. However, Dhoni’s decision to put New Zealand in to bat again was a very positive one and signaled great intent. With the same margin ahead, had he chosen to bat again, it wouldn’t have had the same psychological impact that the follow-on has on the opposition.

Dhoni is known for his well-planned field settings and they were on display at Hyderabad. Knowing the fact that the New Zealand batsmen don’t play spin well and the threat of rain looming large, he kept the pressure on. The fielders were placed in tight attacking positions which created a lot of pressure on the batsmen. Brendon McCullum and Kane Williamson were fighting and once India got a breakthrough, Dhoni further intensified the heat on the batsmen. The moment Ross Taylor walked in, he put men around the bat to unsettle him. One can say that it ultimately culminated in the collapse that saw New Zealand lose the Test match by an innings and 115 runs.

With England and Australia to come later in the season, Dhoni must show the same intensity and positive purpose. When India were No1, there were many occasions when they didn’t grab the game by the scruff of the neck and instead allowed the opposition a backdoor entry. When a captain shows such optimism in his tactics, it automatically rubs off on the team. As a result, they start looking like a unit with their tails up – preventing the opposition a chance.

New Zealand may not be the strongest opposition, but it was imperative that the Indian team finished the job. One more Test awaits them at Bangalore and Indian fans would hope they complete a clean sweep. Captain Dhoni is gradually working his way back to regain his lost mojo.

Numbers prove why VVS Laxman was master at shepherding the tail