Manoj Tiwary is on his way to become the first cricketer to be awarded the recently instituted 'Sunil Valson Award' by the BCCI.

Bengal batsman Manoj Tiwary now has some reasons to feel ‘lucky’, as he is on his way to become the first cricketer to be awarded the recently instituted ‘Sunil Valson Award’ by the Board of Control for Cricket in India (BCCI).

The award is named after former left-arm medium-pacer Sunil Valson, who was part of the 1983 World Cup-winning squad, but didn’t play a single game. In fact, Valson never represented India in any international game. The award recognises the achievements of cricketers, who have spent the most amount of time in the side-lines and dressing room.

‘Luck’ isn’t the word that one can closely associate with Tiwary’s career but the recognition will give him some reason to smile. Set to make his debut in mid-2007 in Bangladesh, Tiwary, who has been a part of several tours since then, has appeared in only nine One-Day Internationals (ODIs). During this span of seven years, Indian team have gone onto play 222 ODIs!

Tiwary made it to the squad in the pre Indian Premier League (IPL) era, when the names of Rohit Sharma, Virat Kohli, Ravindra Jadeja, Ravichandran Ashwin, etc. weren’t much heard of. Such is Tiwary’s fate that once he got dropped from the XI immediately after scoring an unbeaten century for India against West Indies in 2011. It was all the more baffling because it was the only ODI he played in the series.

“If not for Manoj’s [Tiwary] average of 59 and 39 in First Class and List A respectively, at least he is being recognised for his services from the bench!” said a Bengal teammate of Tiwary, who didn’t wish to be named.

In the recently-concluded Vijay Hazare Trophy, Tiwary scored an attacking 130, an innings that comprised nine sixes, to guide Bengal to the semi-final. He followed that up with another half century, but failed to take his team to the final. However, he has once again done enough to knock the doors of the national team.

The same teammate stressed on Tiwary’s desire to be in the World Cup squad and of course, his love for the bench.

“He [Tiwary] has done [scored heavily in domestic] that for so many years. He is hoping to be picked up for the Australia tri-series and, of course, the World Cup that follows. It doesn’t really matter to him, if he plays or not. Even Sunil Valson didn’t play. Tiwary has spent enough time on the bench, to start liking it,” the teammate added with a wink.

BCCI have started sympathising with Tiwary’s pain and they have expressed their desire to please him with more ‘A’ tours and possibly more such awards. However, they feel Tiwary, too is to be blamed for his situation.

“We are making amends by appointing him the captain in almost every ‘A’ tours and we are considering instituting the Ashish Nehra Award to recognise our frequently injured cricketers. Again, Tiwary is a frontrunner in that category too. And if things fall in place, we’ll have the trophy handed to him by Michael Clarke himself!”

We [BCCI] know Tiwary is a very good cricketer but he shouldn’t have rubbed the bosses wrong way. The boss still hasn’t forgiven him for scoring those winning boundaries against Chennai Super Kings (CSK) in the IPL finals in 2012. That prevented CSK’s hat-trick and the boss wasn’t enthusiastic,” said BCCI insider.

Haven’t we heard, “The boss is always right?”

(Suvajit Mustafi consumes cricket for lunch, fiction for dinner and munches numerous other snacks throughout the day. Yes, a jack of several trades, all Suvajit dreamt of was being India’s World Cup winning skipper but ended up being a sports writer, author, screenwriter, director, copywriter, graphic designer, sports marketer, strategist, entrepreneur, philosopher and traveller. Donning so many hats, it’s cricket which gives him the ultimate high and where he find solace. He can be followed at @RibsGully and rivu7) 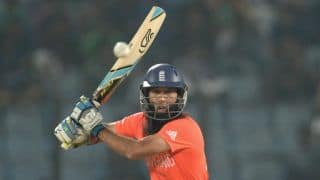