The second Test between India and Australia at the Melbourne Cricket Ground between December 30, 1967, and January 3, 1968, is still remembered for Tiger Pataudi’s heroics with the bat that boggles the mind. H Natarajan brings out the degree of difficulty of Pataudi’s innings of 75 and 85 against unimaginable odds. 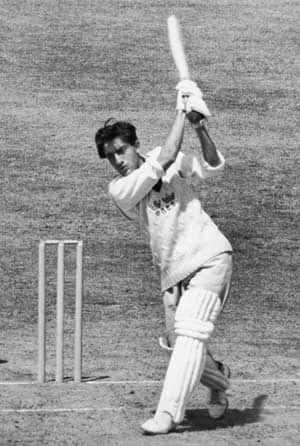 The second Test between India and Australia at the Melbourne Cricket Ground between December 30, 1967, and January 3, 1968, is still remembered for Tiger Pataudi’s heroics with the bat that boggles the mind. H Natarajan brings out the degree of difficulty of Pataudi’s innings of 75 and 85 against unimaginable odds.

India had lost the first Test by an innings and 146 runs at Adelaide. Mansur Ali Khan Pataudi, captain of the Indian team, could not play the Test because of a hamstring injury – one that takes a long time to heal. A similar injury to Zaheer Khan during India’s tour of England in 2011 ruled out the Indian pacer for more than three months.

Pataudi had not touched the bat for a month when he was forced to play the second Test of that series at Melbourne. India won the toss, but opted to bat on a green top because it just did not have the bowlers to exploit the track. What followed was legalised mayhem as Graham McKenzie played havoc, reducing India to 25 for five.

It was now time for Pataudi to play two of the most defining knocks of his career. However, before proceeding any further, it’s imperative to preface the innings with facts that will put the difficulty of the two knocks he played at the MCG in proper perspective.

It’s well known that five months before his Test debut, Pataudi had virtually lost his right eye in a horrific car accident in Sussex. Consequently, he lost perspective in judging distances. “When trying to light a cigarette, I found that I was missing the end of it by a quarter of an inch. I was also liable to pour water from a jug straight on to the table, instead of into a tumbler as I intended,” he wrote in his autobiography, “Tiger’s Tale”.

It took him five years, he said, before he could come to terms with his huge handicap. “I soon found I could no longer hook, because I couldn’t follow the ball around, and I had to curb my natural inclinations to drive half-volleys because I was so frequently beaten by the yorker. On the whole, I found I favoured the quicker stuff; slow spin was so difficult to follow in flight, but gradually I learnt to judge pace by the amount of flight and the effort that the bowler was putting into it….It was a question of finding out my limitations and then playing strictly within them.”

It meant that Pataudi had just one good eye and one good leg when he came into bat at the MCG without having touched a bat for month, against a world-class bowler like McKenzie to bat on a green top. India’s score of 25 for five, which later became 72 for seven, only heightened his misery as captain.

Among those who saw Pataudi’s epics that followed was Lindsay Hassett, who was reminded of his legendary team-mate, Sir Don Bradman.

I was privileged to be invited to the Raj Singh Dungarpur World Cricket Summit in December 2011 where the articulate and cerebral Ian Chappell, who played that Melbourne Test in 1969-70 against India, related an interesting anecdote that underlined Pataudi’s greatness as a batsman: “I happened to be on the other side when Tiger played in Melbourne. He had missed the first Test at Adelaide due to a hamstring injury. He was still half-fit but chose to play given the form of Indian batting. With a one-eye handicap, an injured leg coupled with Melbourne weather amid overcast conditions and India struggling at 25 for five, he played sitting on his good leg on the backfoot. I still remember him playing two stunning shots off Garth McKenzie and Dave Renneberg, both of whom could bowl very fast. There were five or six rain interruptions during the match and every time he walked out he came out with a new bat. Pataudi told me (later) that his bag for the tour included a sweater, a jumper, a pair of socks, socks and nothing else. He picked up the bat kept near the door of the dressing room and came out to bat!”

Contrast that with modern players who carry almost a dozen bats in their kit bag!

Pataudi scored 75 in the first innings in which Rusi Surti was second-highest scorer with 30 and Mr Extras following in the third position with 16. Pataudi did even better in the second innings by scoring 85, but it could not prevent his team from suffering yet another innings defeat.

True appreciation of Pataudi’s genius has to necessarily transcend cold figures. As Imran Khan, another respected cricketing brain, said in his address at the Tiger Pataudi Memorial Lecture: “I grew up admiring two persons. One was my first cousin Javed Burki and the other being Mansur Ali Khan… The duo played together at the Oxford University about a decade before me. My idol (Burki) would tell me if Mansur Ali Khan had not lost vision in one eye, he would have broken all the records. The quality of strokes he could play with one eye, mere mortals cannot play.”

Pataudi had willed his one good eye to give vision to a visually blind. Maybe his brain too could have been saved for humanity. What a genius!