Mark Waugh, born on June 2, 1965, four minutes after his twin brother Steve, was one of the most stylish batsmen ever in the history of the game.

Mark Waugh, born on June 2, 1965, four minutes after his twin brother Steve, was one of the most stylish batsmen ever in the history of the game. Jaideep Vaidya glances through the career of the man Sir Don Bradman himself rated very highly.

Gifted, natural, elegant, languid, carefree… the adjectives could go on and on. Mark Waugh was that special a cricketer. He could send you into a cricketing orgasm purely with his clip off the toes, stylish square-cut, or waltz down the track to send the ball sailing over mid-on. Mark Taylor once called him the “best-looking leg-side player I’ve seen in my time”. His graceful effortlessness while batting transcends generations. ‘Effortless’ is probably the word that describes Waugh the best — be it his refined strokeplay or his blinders in the slip cordon. For the amount of talent he had, even 16,000-odd runs and 289 catches in both formats of the game seemed too less.

Allan Border, Waugh’s first captain in the Australian team and one of his biggest fans, wrote this in the foreword of Mark Waugh: The Biography: “Mark is very laidback, easygoing, and has never become too frustrated, yet he is as competitive as anyone, and has the rare streak of genius that makes him a very special player. I have been at the other end when he has been in full flight and I’ve just had to shake my head and think, ‘Gee, this bloke is something out of the ordinary.’ Those sorts of players don’t come along too often.”

Wisden, who named Waugh one of their Cricketers of the Year in 1991, had this to say about him: “He is the type who can have 30 on the board without the bowlers realising he has his pads strapped on. Undemonstrative, compact and still at the crease, he works the ball rather than crashing it about.”

Not only was he a good batsman, he was also a partnership-breaking bowler, who started off as an aggressive medium-pacer who loved bouncing batsman, before back troubles pushed him to restrict himself to bowling off-spin. However, it was his catching that could make your jaw drop to the floor. Waugh held the record for the most number of catches in Tests by a non-wicketkeeper — 181 — until Rahul Dravid broke it in 2009. This was one of the catches:

You could even say it’s rather unfortunate that Mark had a twin brother, Stephen, who wasn’t as gifted as him, but still went on to achieve greater heights as a captain and cricketer. And Mark, so typical of his laidback attitude, let his brother hog all the limelight. Mark wasn’t interested in the accolades; hell, it almost seemed as if he were bored at times on the cricket field. It was as if he was pushing his brother forward, while he nicely couched himself in a hammock and dozed off. It comes as no surprise then that Mark made his Test debut a good five years after Steve’s, even though the former was the more naturally talented player. The signs were all there, right from the day of their birth.

On June 2, 1965, Beverley and Rodger Waugh became the proud parents of twins at the Canterbury Hospital in Sydney’s western suburbs. The first one, Stephen, arrived at 8.14 pm. It was a good four minutes before Mark decided to pop his head out and say hello to the world, perhaps disturbed from his slumber in the cosy confines of his mother’s womb. “No, you go ahead. Please them. I’m going to hang around here a little longer,” is what Mark would have said to his brother.

After dabbling in soccer, tennis and cricket, the Waugh twins finally decided to stick to cricket. All through the mid-late 80s, Mark lived in the shadow of his brother. While Mark made his First-Class debut for New South Wales in 1985-86 at the age of 20, his brother was already on the fringes of a Test debut, which he made against India soon after. As Steve slowly made a mark for himself at the international level, Mark went on to replace Border in Essex in 1988, on the latter’s own recommendation, and hit a “sensational” hundred and took two wickets on debut, in relative obscurity. It was here that Mark gained one of his most witty, if nasty, monikers: Afghan — the forgotten Waugh, which was a clever play on the Afghanistan War that began in 1979 with the invasion of the Soviets and stretched a decade, soon becoming the forgotten war.

So, when he did finally make his Test debut at the Adelaide Oval during the 1990-91 Ashes, which ironically came at his brother’s expense, Waugh was long ready, having scored 25 First-Class tons already. He was picked for the fourth Test of the series, and on his own admission, wasn’t nervous at all, not that it would surprise you. He had Merv Hughes as a roommate who “helped me relax”. Elaborating on his experience, he said, “It’s pretty hard to get tense when you’ve got a bloke ordering midnight pizzas, and waking you up in the morning by jumping on you.” Waugh walked in at 104 for four and scored 138 in just under four hours. After a few early close shaves, “everything fell into place. It was a lot easier than I thought. I went out there, played my natural game and peeled off a hundred. I just went out there, backed my instincts and batted. I suppose it was a pretty good start to my career.” The classic Mark Waugh understatement, but good enough to erase ‘Afghan’ from his name. He was no longer the forgotten Waugh. You could even say he had upstaged his brother, who took 42 innings to record his first century.

Waugh went on to add a number of memorable knocks to his repertoire. His most prolific campaign was at the 1996 World Cup where he became the first batsman to score back-to-back centuries in the tournament, that included a 207-run partnership with his brother — which was the first double hundred stand in a World Cup. He scored three centuries in total (130 vs Kenya, 126 vs India and 110 vs New Zealand), but could manage only 12 in the final against Sri Lanka, which Australia lost. In the next edition of the tournament, in England ’99, Waugh hit 104 against Zimbabwe to become the first batsman to score four centuries in the World Cup, and also passed Border’s national record of 6,524 ODI runs.

In Tests, Waugh’s most defining innings came at Sabina Park in 1994-95, where he hit 126 in the fourth Test to wrest the Frank Worrell Trophy from the West Indies. His 116 at Port Elizabeth two years later also stands out because of the difficulty of the seamer-friendly pitch the match was played on, where no other batsman crossed 50. The list is incomplete without a mention of the record 464-run partnership with Steve for New South Wales versus Western Australia in 1990-91.

Waugh’s only drastic slump in form came early in his career, when he recorded four successive ducks against the Lankans during a tour of the Emerald Isle. However, the lowest point of his career came in 1998, when he was implicated in a case dating back four years when he had struck a ‘business deal’ with an Indian bookmaker named ‘John’, where Waugh was paid $4,000 for pre-match intelligence such as pitch and weather information.

But why would Mark Waugh risk so much for just $4,000? Gideon Haigh provides an explanation in his biography of Shane Warne, who was also introduced to ‘John’ by Waugh: “His familiarity with punting, and fondness for harness racing in particular, was well known. He liked a win, and ‘John’ was offering him a piece of the action in which he could not lose. I suspect that, for all his easy-going nature, Waugh was more covetous of money than he let on, possibly because his shrewd and industrious brother Steve was so adept at accumulating it.”

However, the whole episode was a minor blemish on an otherwise great career of a player who perhaps did not get the due as he deserved. In 2002, after 8,000-odd runs in either format, Waugh, aged 37, announced his retirement from all cricket after he was left out of the Ashes squad. And just like that, without even a squeak, he was gone. Sir Don Bradman called him “the most elegant and graceful cricketer of the modern era”. Quite the compliment, coming from one of the greatest cricketers of all time, enough to make anyone swell with pride. However, Waugh would probably have laughed it off and taken a nap. 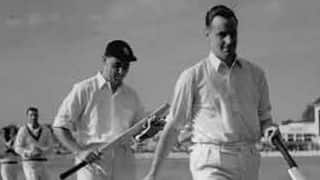 Ricky Ponting misses out on double century for Sussex against Derbyshire