The MCC side is far more stable, but the explosive ROW team could blow them away.

The Rest of the World (ROW) XI take on the Marylebourne Cricket Club (MCC) in the Lord’s bicentenary match on July 5, 2014. ROW have too many aggressive batsmen. Nishad Pai Vaidya says that the unpredictability factor is their biggest strength and weakness.

There is a festive atmosphere as the legends come together for the Lord’s bicentenary match. It is a cricket lover’s ultimate dream — Sachin Tendulkar and Brian Lara on one side and Shane Warne and Muttiah Muralitharan on the other. It is a cynosure of modern greats, coming together in a friendly exhibition to celebrate the Mecca of Cricket. It has been a while since we have had a match of such magnitude. The last time Lord’s hosted such a game was back in 2005, when similar sides played a Tsunami Relief game.

If one looks at the two sides, one would find that the Rest of the World XI (ROW) are packed with enough firepower in their batting, with players who can single-handedly win a game. In comparison, the MCC line-up has some of the greatest batsmen in Tendulkar, Lara, and Rahul Dravid, and Shivnarine Chanderpaul, who bring in stability. But, ROW have some free-stroking batsmen who have the fearless streak to take on the bowling attack. It is like having a double-edged sword — great if it works, but it can also backfire.

Adam Gilchrist will play his first game in over a year and is set to open the batting with Virender Sehwag. It makes for an exciting prospect as the duo have been fantastic opening batsmen in the 50-over game for their respective nations. Both have a simple philosophy — attack when the ball is in their zone. Tamim Iqbal is a part of the side, and could be in line to open the batting. But, his recent form hasn’t been encouraging and that is a further worry for the ROW batting.

Yuvraj Singh and Kevin Pietersen, two good mates will feature in the middle order. If it is their day, they can take the game by the scruff of the neck and seal the deal. As we saw during the Indian Premier League (IPL), Yuvraj can blow hot and cold. Pietersen had a tough IPL and hasn’t been at his best in recent times. So, it was a gamble to put them all in one side. And, with Shahid Afridi coming in, it only adds to the firepower but also the unpredictability factor. That would be their greatest strength and weakness.

In this line up, Paul Collingwood may slip into oblivion. After all, he is someone who has a contrasting batting style and could bring in some calm to the proceedings. The player turned coach has a crucial role in this team as a batsman, though it is easy to forget him with some dazzlers in the side, Collingwood too can play the aggressive hand, but needs to be the anchor in the middle for this team.

In some ways, one feels they could have divided the sides a little better. A Dravid or a Chanderpaul could have been a part of the ROW team and that could have added more balance. Similarly, one of the aggressive batsmen could have gone to the MCC side to add more dynamism to the unit. But, after all, it is an exhibition game to be played in the right spirit. Though the players would give it everything, the result won’t matter. 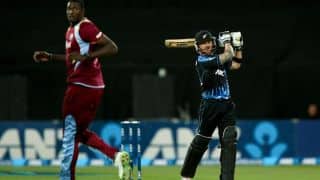