Mashrafe Mortaza, born October 5, 1983, is Bangladesh’s most successful fast bowler whose career could have scaled peaks if not for a plethora of injuries. Karthik Parimal looks back at the feats etched by this speedster despite the many abrupt halts in his brief journey thus far. Mashrafe Mortaza, born October 5, 1983, is Bangladesh’s most successful fast bowler whose career could have scaled peaks if not for a plethora of injuries. Karthik Parimal looks back at the feats etched by this speedster despite the many abrupt halts in his brief journey thus far.

In the small Asian contingent playing this sport, Pakistan is perhaps the only country to have produced quality fast bowlers by the mill. In India, Sri Lanka and Bangladesh, where the pitches are generally slow, spin is the prerequisite for consistent success and bowlers of that genre are hence, understandably, in abundance. As a reason, a seamer who occasionally brushes the higher readings of a speedometer is revered in these sectors. Mashrafe Bin Mortaza, born in Narail, a south-western district in Bangladesh, instantly shot to fame since word had spread that he was the first of the aforesaid kind to emerge from the country.

As a child, Mortaza was hyperactive, and although cricket didn’t capture his attention at the time, he spent his energy playing football and badminton, apart from swimming for hours in the river Chitra that cut through the region. Apparently, as reported by Rabeed Imam in TigerCricket.com (Bangladesh Cricket Board’s official website), Mortaza used to tie up a cousin on his back and cross the river 6 times without stopping.

In due course of time, he turned to cricket and appeared in a district match for Narail, where he engineered victory with a one-over spell. It was this performance that led to his inclusion in the Bangladesh Cricket Board (BCB) Under-17 team. A year later, playing for the Under-19 side, Mortaza was a bright blip in former West Indies stalwart Andy Roberts’s radar. Roberts, who was the temporary bowling coach for Bangladesh then, conducted a camp and, after monitoring Mortaza’s progress there, spoke highly of the bowler to the selectors.

This recommendation added enormous weight to his resume and he was pushed onto the big stage devoid of any First-Class experience. The word ‘genuine’ is often loosely used, but it was Mortaza’s genuine talent as a fast bowler that convinced the Bangladeshi powers that be of his promotion to the international arena. Soon, their selection had been vindicated.

In the Bangladeshi winter of 2001, Mortaza donned his country’s flannels for the first time. The opponents were a strong Zimbabwean unit bolstered by the presence of Andy Flower, Grant Flower, Heath Streak et al. Rain saved Bangladesh the blushes in the first Test at Dhaka before the pummelling they received in the next fixture at Chittagong. However, Mortaza stood tall even as the rest of his cavalry fell by the wayside. It was a glimpse of a trend that would ensue for the next few years. In the 2 Tests, he took 8 scalps — inclusive of a 4-wicket haul — and was the leading wicket-taker with an average of 27. With his suave action, generating considerable pace and bounce, he troubled the Zimbabwean batsmen, notably Grant Flower, and was the silver lining in Bangladesh’s cloud of worries.

That same year, in December, he bagged 4 wickets from 2 innings in New Zealand and perched himself as the spearhead of the attack. Having showcased his efficiency, he was over-bowled in his first 2 series, and this physical strain, interspersed with mental demands of playing at the highest level, took its toll on Mortaza. He was ruled out for the series against Pakistan in 2002 owing to a back injury — the first of many to visit him. To make matters worse, he injured his knee during the rehabilitation process and was grounded for a further 8 months. Following a long hiatus, he returned for the 2003 World Cup in South Africa, where he took 2 wickets for 38 runs against Canada — a fixture in which Bangladesh was surprisingly trounced. He remained wicketless in the next match against Sri Lanka before making a quick exit. 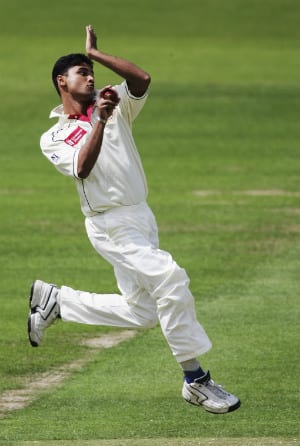 With his suave action, generating considerable pace and bounce, Mashrafe Mortaza troubled the best of batsmen in his peak © Getty Images

Later in 2003, Bangladesh played host to England for 2 Tests and 3 One-Day Internationals (ODIs). While the English had no qualms in disposing off a frail line-up, Mortaza tirelessly bowled 66 overs in searing heat in the series — 23 more overs than Mushfiqur Rahman, the other fast bowler in the side — and was the second-highest wicket-taker. In the second Test at Chittagong, he took 4 for 60, dismissing batsmen the calibre of Michael Vaughan and Nasser Hussain — both players beaten for pace and caught behind by ‘keeper Khaled Mashud. But the additional workload thrust upon him yet again had its repercussions. In the second innings, he collapsed with a twisted knee after delivering the ball. The enormous value he added to the bowling department was evident in this note by Wisden: “Bangladesh’s last vestige of hope vanished when Mortaza — easily their classiest bowler — fell awkwardly in his follow-through and limped out of the match with a twisted knee.”

The recovery process took nearly a year, but the wait was well worth it. It was in ODIs that Mortaza’s stature as a handy lower-order player began to grow and the series against India provided ample evidence of that fact. In the second limited-overs game at Dhaka in the December of 2004, he thwacked 31 to propel Bangladesh’s total to a healthy 226, before chipping in with 2 wickets and 2 catches to trump India by 15 runs. That historic moment was marked with him winning the man-of-the-match award. The following month, he was instrumental in inflicting defeat upon a much weaker Zimbabwean side that visited and pushed them to the brink in the ODI series, too.

On Bangladesh’s first tour to England, they beat a first-rate Australian side in the NatWest One-Day tournament and Mortaza registered economic figures of 10-2-33-1 during the game. Later that year, he pulverised Kenya in a 3-match series.

The victories, albeit intermittent, filled Bangladesh with hope prior to the 2006 ICC Champions Trophy, but Mortaza’s injury worries spilled off field as well. Freakishly, he managed to sprain his ankle while getting down the stairs at home. This kept him from featuring in the warm-up fixtures before the commencement of the tournament, but he was nonetheless named in the playing eleven after proving his fitness on the morning of the group match. He lasted the first round, which was as long as Bangladesh lasted, too, and averaged 50 with the ball.

Before the Champions Trophy, though, Bangladesh made a quick halt at Kenya, for a 3-match ODI series, and it was here Mortaza’s reputation as a genuine quick came to the fore. After bagging 6 scalps in the first 2 matches, he took 6 for 26 in the final ODI to shoot the Kenyans out for a paltry 118. The figures were his best in one-day cricket, and also the best by any Bangladeshi cricketer ever. It also thrust him to the top of the list of leading wicket-takers in ODIs for the calendar year of 2006.

The 6-wicket haul notwithstanding, Mortaza’s finest hour was etched at Port of Spain, in the March of 2007, during the ICC Cricket World Cup fixture against India. Accounting for 2 top-order (Virender Sehwag and Robin Uthappa) and 2 lower-order wickets, he finished with 4 for 38 to bowl the sub-continent giants, and one of the favourites to go the distance that tournament, for a substandard total of 191. The Bangladeshi batsmen made mincemeat of the chase to cause one of the biggest upsets in the history of World Cup. Like former captain Akram Khan stated, it was Mortaza, indeed, who broke the backbone of the Indian team and made the victory largely possible.

A few months after that incredible bowling performance, Mortaza returned to torment the Indians by wielding his willow. He smashed 4 consecutive sixes before taking a single off Dinesh Mongia and penned his name in the annals of Bangladeshi cricket for scoring the most runs in an ODI over. With that, he owned the highest batting strike-rate for a Bangladeshi player facing 1000 balls or more. In time, he also usurped the record for most catches for Bangladesh by a non-wicketkeeper.

Evidently, Mortaza’s career turned a corner since 2006. On the field, he paved his way into the elite group and was named the vice-captain to Mohammad Ashraful. Globally, too, his rise was noted. He was named to represent Asia XI in the 2007 Afro-Asia Cup. Off it, he was roped in for multiple endorsements and became a household name. Hence, it came as no surprise when the head honchos put him at the helm in the July of 2009.

In the interim, he steered Bangladesh to a maiden ODI victory over New Zealand and was purchased by the Kolkata Knight Riders (KKR) in the Indian Premier League (IPL) for a whopping sum of US$ 600,000 — against base price of US$ 50,000.

In his first Test as captain, he led the team to victory against a second-string West Indian unit (owing to a standoff between the West Indies Cricket Board and the West Indies Players’ Association), but the troubled knee resurfaced and he had to leave the field on the last day. It was Bangladesh’s first Test win against West Indies, and second overall. Unfortunately, it was the only Test he skippered in as injuries put him on the sidelines for the umpteenth time in his career.

Post recuperation, he was handed the reins, yet again, and he lasted 7 ODIs before his ankle chained him to the fringes. For a man who suffered innumerable injuries at the age of 25 — as stated by the fast bowler to ESPNcricinfo, his list includes “Left knee, three operations; right knee, one operation; back, stress fracture — it’s better now but still gives some trouble — some shoulder problems; ankles, damaged ligaments twice” — the problems compounded with each passing year. Considering Mortaza’s spate of sporadic appearances, the baton of captaincy was then duly passed to Shakib Al Hasan.

As of October 2013, Mortaza last played a Test 4 years ago, although his most recent ODI appearance was in December 2012. Thereafter, he was subject to yet another injury — his left-heel the culprit this time around — while representing the Dhaka Gladiators in the Bangladesh Premier League (BPL). With 36 Test and 128 ODI caps already under his belt, there is no denying the fact that his national side will be bolstered by his return. He turns 30, at the time of writing, it’s safe to assume that he’s got enough fuel in the tank to last a few more years. However, as far as his injuries are concerned, there doesn’t seem to be a long-term solution yet. He wasn’t named in the squad for the first Test against New Zealand, slated to commence on October 9, and it remains to be seen if he can stage a comeback before this year draws to a close. For a bowler of such calibre, it would be a shame if he fails to add to an already glittering tally of records.