Mashrafe Mortaza: This will be one of the most important matches that we will play

Mashrafe Mortaza: This will be one of the most important matches that we will play

It’s a virtual pre-quarterfinal when Bangladesh take on England at Adelaide in the ICC Cricket World Cup 2015. Ahead of the important match, Bangladesh skipper Mashrafe Mortaza spoke to the press.

Q: Being a pressure game, what is your approach? Both teams are under pressure, so what is your take on this match?
Mashrafe Mortaza (MM): It’s a pressure match, but our boys are looking very confident, especially after chasing 318 in the last match. Doesn’t matter who they’re against. So the boys are very confident, which is more important, and they’re ready to give their best tomorrow.

Q: In Bangladesh’s cricketing journey over the last ten years, is this the biggest game Bangladesh will be involved in the last 20 years?
MM: It’s difficult to say because you can say Asia Cup final was very important for us. There were a few matches definitely, but it is one of them. If we can win this match, it will be a great memory for everyone who are involved with this team.

Q: In the last World Cup in Chittagong, do you have a stronger side this time around to try to achieve that again, more experienced?
MM: Yeah, that was in Bangladesh. Definitely it was four years back. I think that is a long time ago. We have to play good cricket tomorrow, which is very important for us. Yes, it’s a nice memory for us also, but I think it depends how we play tomorrow. That is the main thing.

Q: In the last game there were Bangladeshi flags and Bangladeshi supporters. There were going to be a few thousand Bangladeshis who live in this part of Australia at this game. How much difference does it make for you as a team even though you’re a long way from home to feel that you have support on the ground in a match like this?
MM: It means a lot to us, because once we play Bangladesh around 35,000 people are supporting us, and we never expect that in Australia that we’ll get it, but it is amazing to see that those people who live in Adelaide or in Sydney, even in Melbourne, they’re all in the field and supporting us. Hat’s off to them, and hopefully we’ll get it tomorrow as well, and we’ll try our level best to give them some good moments.

Q: Are you hundred per cent ready to face England tomorrow?
MM: Inshallah I have to, and I’m ready to play. It looks better.

Q: Stuart Broad and James Anderson have struggled in this tournament. Do you feel if you get on top of them early that that will set the tone for a dominant batting performance against England’s pace attack?
MM: Yes, some players can be a difficult time, but I think we have to think of our process. It doesn’t matter who it’s against. I think still Anderson and Broad can make the difference. We can set the tone in first ten overs and that would do really good and hopefully we’ll do it, Inshallah.

Q: Is the bowling still a concern considering that 300-plus against Scotland?
MM: It was a good wicket, but it’s still I think 270, 280 could have been a lot better, which is what we were thinking. Hopefully we’ll come back tomorrow, but our bowling is, I think, good enough to do it. The wicket looks to me 270, 280, it’s really good. 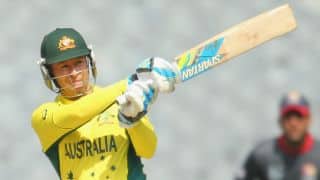 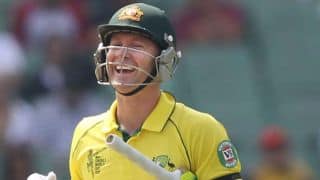