Mashrafe Mortaza: Suresh (Raina) took the game away from us

Mashrafe Mortaza: Suresh (Raina) took the game away from us

Q: In your fielding there were a lot of errors, and it seemed again that you couldn’t really cope with the dimension of the ground. Was playing here again a challenge?

Mashrafe Mortaza (MM): Playing anywhere is a challenge. Once you’ve faced a team like India or bigger sides, it is always a challenge, but I think at some stages we’ve been very good. Sadly, Suresh (Raina) took the game away from us and I have to say that Rohit (Sharma) was brilliant today. I don’t think MCG was an issue.

Q: Reaching the quarterfinal is a great thing for Bangladesh cricket and you have reached great heights. If you had to take home two great positives from your journey so far, what will it be?

MM: I think except today, the batsmen have batted really well throughout this tournament and hopefully they’ll continue because we have a tough year ahead of us. Another is the confidence that we got, hopefully it will continue.

Q: How impressed were you with India today, and would you expect them to defeat Australia or Pakistan in that semi?

Q: A disappointing end to the tournament, but overall it has been a fairly successful World Cup. How do you see this affecting the state of cricket in Bangladesh and encouraging new cricketers and new fans?

MM: Yeah, definitely. It was a brilliant tournament for us but the way we played today, it wasn’t great. We haven’t any cricket in Australia, so it was a really difficult task for us. But the way the boys added up to the wicket and condition, I feel very proud as the captain of this team, and hopefully our boys will take it in the next series.

Q: There have been instances in the past, there has been Australia who’s been unbeaten in the World Cup and lifted the Cup. Looking at India’s performance, should oppositions be fearing them now?

Q: Mashrafe, what did you think when the appeal was negative? Do you think the match could have been more competitive had Rohit Sharma got out at that stage?

MM: It could have been. We know that we have to take wickets against India otherwise it is going to be very difficult. At that stage if Rohit (Sharma) were given out then it would be great.

Q: Could you talk about the spell between overs No. 11 to 35 when your bowlers kept India in check? What was impressive for you in how your pacers and spinners operated in the 25-over spell?

MM: I think our plan was to stop singles. Yes, they can hit three, four or six but I think our plan was pretty good. We were a bit unlucky that we couldn’t get a wicket at that time. If we could have got one wicket at that time it would have been much better for us, but the way Rohit and Suresh played, it was brilliant. Hopefully it will carry on for them, and good luck to India.

Q: What do you think was the moment the match shifted towards India when you were bowling, at what stage?

MM: We always knew that they’ll come hard after 35 as they have been brilliant after that over. They take the calculated risk, and they’ve had success. And again we couldn’t bowl according to our plans, and that was the moment, during bowling time. 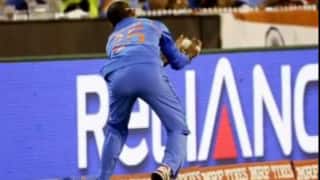 Shikhar Dhawan’s catch and the science behind it