Mayank Agarwal s exploits have helped Karnataka seal a spot in the quarter-final of Ranji Trophy 2017-18.

Mayank Agarwal followed his 304 not out by slamming 176 against Delhi. His Karnataka teammate Manish Pandey then prophesised, It ll be easy for him to score about 1,000 runs (this season) if he keeps batting this way. Keen to prove the same, the Karnataka opener belted 90 and 133 not out against Uttar Pradesh in the next fixture. He tops the Ranji Trophy run chart this season with 757 runs at 126.16.

Agarwal would have neared the four-figure mark by now had he made a better start to the tournament. His Ranji Trophy 2017-18 campaign started with 31 against Assam, and a pair against Hyderabad.

Agarwal is 26, an opener and his goal like the most is to seal a permanent slot in the senior India XI. So does state-mate KL Rahul. Then there s Murali Vijay and Shikhar Dhawan. The teenage sensation Prithvi Shaw is banging the doors. Prashant Chopra has made a strong case. Gautam Gambhir isn t forgotten. I have not even mentioned Agarwal s fellow opener Ravikumar Samarth, Priyank Panchal, Abhimanyu Easwaran and others.

The eventual goal, the dream rather, for the once teen prodigy seemed fizzling at this point

His batting coach RX Muralidhar revealed to Wisden, It took us a lot of time for him to say So what? (if the goals aren t met) . The moment he let go of that goal, he started opening up. Of course, playing for India is the ultimate, but you cannot think of playing for the national side and forget about what will take you there.

The release of pressure perhaps worked well for him. Agarwal however is reaping the riches of the pre-season meticulous regime.

We (me and Murali) decided that if we don t tick all the boxes, its fine. We decided to give technique a backseat and do skill-based training. Murali would create situations for me like this is the first 20 overs of the match and how would I bat in them. He would put me in a spot and leave it to me on how would I respond. I like to bat the free-flowing way but here I was reacting to those situations: often playing shots and often leaving the balls. I understood my game and mindset better, Agarwal emphasised on the role-play sort of method that he and Murali employed during the pre-season practice.

Murali has worked hard on me and lot of credit goes to him. These are four day games and we focused on upping the quality and quantity. I was facing around 700 to 1,000 balls every day. Again, credit to the coach for delivering me that, Agarawal added.

A thousand balls! We see 600 being bowled in an ODI and 540 in a day s play in a First-Class game. That is not all; he has been taking long-distance runs. Also, Vipasana (the ancient Indian meditation technique) has been beneficial.

The ebullient youngster has tremendous work ethics and the result is out there to be seen.

Agarwal s exploits have helped Karnataka seal a spot in the quarter-final. The only other sides that have done the same so far are Delhi and Vidarbha. With the final round beginning on Saturday, Karnataka will face Railways at Karnail Singh Stadium, Delhi.

Hasn t this been an exciting season? The final round will be very interesting with five spots to be grabbed. We are well prepared and will look forward to replicate the success so far, said Agarwal.

You can t copy Sehwag

The Karnataka batter rose to fame after the 2010 Under-19 World Cup in New Zealand. However, it was the subsequent editions of the IPL that made him a household name. He has played important knocks for Royal Challengers Bangalore (RCB), Delhi Daredevils (DD) and more recently for Rising Pune Supergiant (RPS).

A Virender Sehwag fan, and often linked to his attacking style of play, Agarwal dismisses the comparisons: I love to watch him bat. You can t copy him. Be it playing style or him as a person, he is unique. I can t compare myself to this Indian great. I don t believe in comparisons.

However, it is not the first time he has reached in vicinity of national selection doors. The headlines for Duleep Trophy 2016 was grabbed by Gambhir for his 356 runs at 71.2. The rich form paved the path back for the southpaw to the Indian XI. However, it was his fellow India Blue opener, who was the best opener in the tournament. Agarwal had amassed 420 runs at 84 against the relatively unknown pink ball.

The consistency from hereon will mark Agarwal s future. For now, he knows he is four games away from another Ranji Trophy triumph for Karnataka. 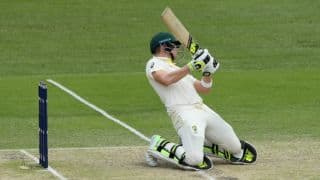 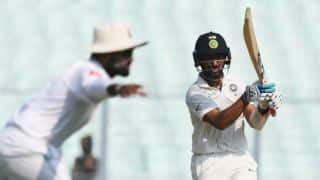