Twenty years ago, South Africa were eliminated from the 1999 World Cup in Birmingham.

Twenty years ago, almost to the day – literally, June 16, 1999 to June 18, 2019 – my father and I sat in a room at a Birmingham hotel, eating biscuits and sipping tea, while watching a James Bond film on the television.

It wasn’t breakfast. That was our dinner: tea and biscuits, the standard in-room complimentary fare in hotels worldwide.

We were running low on money – credit cards and ATM cards were not something my father believed in – and he had been unable to exchange more pounds, as he wanted to, before we reached Birmingham on that warm June summer evening two decades ago.

We put on the small television, and flipped channels – and when I say flip, I actually mean we flipped the turnaround dial – until we settled on the Bond classic Goldfinger – the one with the muscular Chinese villain in a bowler hat – and munched on tea and biscuits.

We didn’t say much, probably because we were tired and also because of the awkwardness of the situation.

I remember, more than the movie, the silence as we munched on those biscuits and drank our English Breakfast tea. The two of us, outsiders in England, bound by our love for cricket and brought to Birmingham because of it.

Twenty years ago to the day, my father and I were at Edgbaston to witness arguably the greatest ODI of all time: the 1999 Cricket World Cup semi-final between South Africa and Australia. Yes, that match.

The backdrop is thus: While in England a year before, my parents and I had filled out an application for tickets to the 1999 World Cup. I forgot what was paid – it cannot have been cheap – and with the help of some local resident family friends, who gave their address for collection, the tickets eventually landed up.

(IN PICTURES: The greatest ODI ever!)

It was a week after I graduated from boarding school in Mussoorie, a town in the foothills of the Himalayas. I had the World Cup on my mind months before graduation. It would be an understatement to say I was buzzing.

When choosing tickets, my father and I went straight for the main matches – the two semi-finals. Pakistan vs New Zealand at Old Trafford and South Africa vs Australia at Edgbaston. The first semi-final turned out to be a one-sided match, but I can say that I was at Old Trafford when Shoaib Akhtar produced the ball of the tournament. (For more on that, read my earlier recollection here).

After that match, we traveled from Manchester to Birmingham for what turned out to be the mother of all World Cup semi-finals.

On the morning of the semi-final, as we got out of the elevator and went to the reception to clear the bill, we saw standing at the front desk Pat Symcox, the South African offspinner not long into his retirement from international cricket. He seemed upbeat, standing with a blazer slung over his shoulder, one leg crossed over the other, left elbow on the reception desk.

I can’t for the life of me remember the hotel we stayed at, but it wasn’t that far from Edgbaston. I remember the first impression of the stadium was the number of fans wearing dark green South Africa jerseys. The crowd gathered was most distinctly South African, be it South African nationals or English supporters of Hansie Cronje’s team. Clearly, the green outweighed the canary yellow.

The moments from the match that I can remember are several, but I will choose the ones that really left an impression. First up, a rasping cut shot from Mark Waugh. I remember thinking to myself ‘wow, so that’s what real bat speed is!’. A pulled six from Ricky Ponting, off Steve Elworthy. Shane Warne‘s dismissals of Herschelle Gibbs, bowled by an even better delivery than the one to Mike Gatting, and Cronje. Has Warne ever bowled better in a one-day match? I think not.

Paul Reiffel‘s drop at long-on, a reverse-cup attempt that went down to give Lance Klusener a life. To make it worse, the ball parried off Reiffel’s hands and went for six. All around us, a sea of South African fans went bonkers. We were about 15 meters away from where Reiffel stood, so it stands out.

Then, most vividly, the way that my father, as Damien Fleming was given the task of bowling the last over of the match, with nine runs to defend and Klusener on strike, said that this was not going to end as many expected.

“Jamie, Jamie, just watch. It’s not over,” he said, eyes fixed on the scene about to unfold.

I can remember what happened next clearly. Off the first two deliveries, Klusener drove Fleming for two fours to level the scores. Beautiful shots, hard hit and all along the carpet. The South African fans gathered at Edgbaston roared. It was the most giddy I had ever been at a cricket match.

Those two fours left South Africa one run to get from four balls. Game over, I thought. As did most at the ground, and countless watching the match on TV.

Then, Allan Donald was nearly run-out. Everyone gasped. I looked at my father, whose eyes were twinkling. Surely this could not end with South Africa losing, I thought. I could hear my father’s words: “It’s not over.”

Then, the moment that crippled South African cricket. Klusener pushed the ball mid-off and set off for a risky single. Donald, looking at the fielder, started to get back to his crease and did not hear Klusener’s call. Now it was game over.

The run out that capped one of the most dramatic ODI finishes of all time.

Back then, as you could, the fans flooded the field. My father and I sat for a while, soaking in the atmosphere. “I told you, I told you,” said my father. “My gosh, Jamie, my gosh.”

A few minutes later, we spotted the well known sports photographer Kamal Sharma near the boundary, clicking away. My father and he made contact, and we crossed over onto the field. Then we made our way closer to where the post-match press conference was happening. Up on one of the balconies stood Harsha Bhogle and Ramiz Raja. As soon as Harsha spotted my father, he waved us up. The security guards allowed us through the crowd, thanks to Harsha’s help from up above, and we walked up the stairs to where he was sitting in the commentator’s box.

I remember seeing David Lloyd and Ian Botham in that area. I looked down, and there was Warne descending another set up steps not far away. Then we looked down on the Edgbaston field, a swarm of supporters still there, in disbelief.

Twenty years later, I am back at Edgbaston. My father is no longer alive. I am now a sports journalist, brought back to this country two decades later for the first World Cup to be held in England since 1999. The emotions, as you can guess, run high for various reasons.

The ground has changed, physically. I cannot recognise the stands in their current shape. Standing in the press box, a sense of dizziness momentarily disorientates me. I have never been in a press box this high up, or looked down at the pitch from this angle. You are detached from the cricket inside the Edgbaston press box, even more than the iconic MCG. It is definitely not the spot at which I stood with my father and Harsha and looked down at the fans back in 1999.

Once in the stands, my eyes scan the ground for any signs of where my father and I would would have sat and ate hot dogs and drank some sort of cola from paper cups. Everything looks very different. I can picture Klusener and Fleming and Warne and Gibbs and Reiffel, but the scenario is far detached from what it was on June 17, 1999.

The match that brings me here is not without design. I chose this match to make a pilgrimage back to Edgbaston. I did not know, at the time, that this would be another knockout match for South Africa.

I have been at two World Cup semi-finals involving South Africa. In 1999, as already outlined, I was a fan when they lost to Australia in heartbreaking scenes at Edgbaston. In 2015, I was covering the 2015 semi-final in Auckland, which also ended in heartbreak for South Africa.

Four years later, South Africa are playing a must-win match against New Zealand – whom they last beat in a World Cup in 1999, also at Edgbaston, of all places – and I am also here. A couple of the South African journalists I mention this to look at me and say that I bring their team bad luck. It is a plausible theory.

On the eve of the big match, I sat alone, for a brief while, in a Birmingham hotel room, somewhat smaller than the one my father and I occupied two decades ago, to recollect my memories of that trip. On Wednesday, I will again enter the gates of Edgbaston to watch South Africa play a World Cup match. 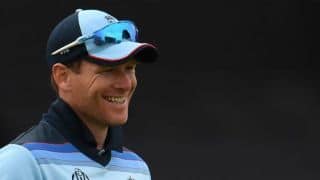