Michael Clarke 100 Tests: The leader comes to the forefront for his nation

Michael Clarke 100 Tests: The leader comes to the forefront for his nation

Michael Clarke completes 100 Tests as Australia take on England in the third Test at Perth. Nishad Pai Vaidya looks at Clarke, the leader and how he is poised to shape a new Australian unit as he heads into a new phase of his career.

In 2004, a youngster walked in a side of giants that ruled the cricketing world. It was a team of champions — greats of the game who etched their names in cricketing history with their remarkable feats. Thus, this youngster was automatically christened ‘Pup’, being the youngest member of the pack.  And he didn’t disappoint. Making his debut on the supposedly toughest tour i.e. India, he scored 400 runs in the four Tests and helped Australia conquer the final frontier after 35 long years. Michael Clarke may have made a name in the one-day arena before that tour to India, but it was with that performance that he showed that the future was bright.

As Australia take on England in the third Test at Perth on Friday, Clarke completes 100 Tests — a nine-year long journey that has seen almost everything there is. The Australian captain has seen an era of greatness go by and the arrival of an uncertain phase. It was left to him to pick up the pieces and build a side to live up to the legacy of the world beating sides, fostered by Steve Waugh and Ricky Ponting. So far, he has seen the best and the worst as a skipper. There was that 4-0 triumph against the Indians at home, a victory in Sri Lanka and then the ignominy of being drubbed in India and losing the Ashes 3-0.

Yet, Clarke has maintained his stature as the leader of men. There have of course been a few hiccups — the ‘homeworkgate’ in India being an example — but he has more often than not steered the ship with his bat. Through this uncertain phase, there was that need of a dominant batsmen; a world-class customer who could play in any conditions. Clarke has lived up to that tag with a torrential flow of runs from his bat — double-tons coming at regular intervals.

Let us mainly focus on Clarke after he took up leadership. During his younger days, he was always touted for the role, but there wasn’t enough pressure on him in that star-studded side. Since the onus fell upon him after Ricky Ponting relinquished the role, Clarke has scored 3243 runs at a staggering average of 63.58. In this interval, he has scored 12 tons. Before his appointment, he had scored only two more tons in 68 matches. It is an apt reflection of how he has taken on the mantle and led from the front.

It all started with that ton against Sri Lanka in the third Test at Colombo in September 2011 that helped them seal the series 1-0. When Australia flew to South Africa for a testing tour later that year, Clarke started off with a combative 151 against the likes of Dale Steyn, Vernon Philander and Morne Morkel in tough conditions at Cape Town. Out of a team score of 284, he accounted for 151 himself, and it came off only 176 balls. But, Australia’s dramatic second innings collapse saw them slide to a defeat. But those tons set him up as a skipper, and the year 2012 saw him record four double tons (one of them being a triple).

But cricket is a team game and individual performances aren’t enough. While Clarke continued making runs, the results were not coming his way. Perhaps the loss in the Ashes in England earlier this year fired up a different side in the Australian unit led by Clarke. When they took the field in the first Test at Brisbane in November this year, there was that dash of fearlessness oozing dominance — at times bordering arrogance. It looked like Clarke had said, “Enough is enough” and rolled back the years to bring back that same bravado.

The “Pup” has evolved into a senior statesman today and as he stands at a new milestone, there is a lot for him to achieve personally and as captain. The first two Tests against England have shown that he is ready to take this side to a new level and pull them out from the despair of mediocrity. There is a younger generation that is coming into the side, and it is his responsibility to shape them into that world-beating unit again. He has to play the Allan Border-like role in the years to come to ensure that Australian cricket touches the pinnacles of success again. 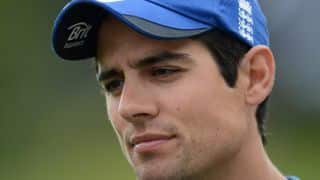