Michael Clarke: A phenomenal 2012 and with promise of lot more to come in the years ahead

Michael Clarke: A phenomenal 2012 and with promise of lot more to come in the years ahead

'Pup’, as Michael Clarke, was affectionately known as in the Australian cricket circles during his early days, has matured into an enforcing bulldog who knows no fear. Clarke was marked for greatness from a very young age, but he would often gift away his wicket away while looking to play strokes. 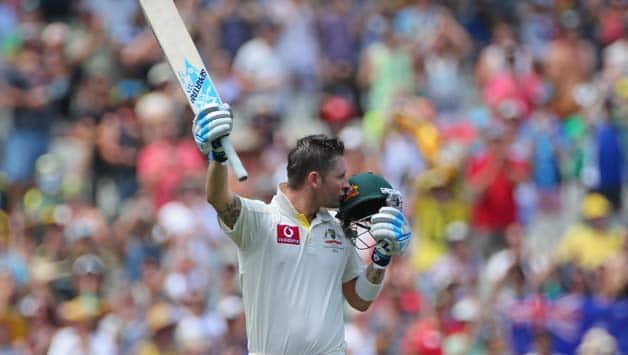 ‘Pup’, as Michael Clarke, was affectionately known as in the Australian cricket circles during his early days, has matured into an enforcing bulldog who knows no fear. Clarke was marked for greatness from a very young age, but he would often gift away his wicket away while looking to play strokes. There was and still is no stroke that he cannot play, but the difference from back then is that he now has a more calculated approach and is the prized wicket in the Australian line-up as his second successive double hundred against South Africa showed.

This has been a golden year for the golden boy, as he has racked up four scores in excess of 200 in the eight Test matches that he has played this year, with a highest of 329 not out. In the process, he became the first man in cricketing history to achieve this unique feat. Not even the legendary Don Bradman accomplished this. He averages an astronomical 106.33 to date in the year 2012.

Clarke took over the reins of the team from Ricky Ponting at a stage where the Australians were down in the dumps, having fallen quite a few places from their lofty heights of the No 1 team that they had maintained for over a decade. A question mark hung over how this Australian side, without the stars that led them to rule the roost, would get back in the reckoning of the best team in the world.

This is where Clarke’s astute, inspiring and creative leadership came into play and in a short time he has brought the team close to the No 1 ranking. He has led from the front and averages 75 with seven hundreds to his name as the captain of the side.

Critics have questioned his ability to play the short ball, but it isn’t a weakness in his armour. Yes, he does look a little uncomfortable, even ungainly, against the short ball but as his recent penchant for big scores have shown, coming in Australian condition where the short ball weakness can easily be exploited, it isn’t a limitation.

Another source of criticism has been his apparent reluctance to take the number three spot in the batting line-up. The wisdom being that the best batsman of the side should bat at that spot. But when a batsman can dish out centuries like he does coming at No 5 and dictate terms to the opposition, who are we to question his batting position.

Even Sachin Tendulkar, widely acknowledged as the best batsman of this era, hasn’t batted at No 3 three much during his career.

They say a batsman’s best days come when he is in his thirties. If that holds true, we will be seeing a lot more of Clarke’s genius in the coming years. With Tendulkar, Ponting and Jacques Kallis all nearing retirement age, he will be the torch bearer of batsmanship in the near future.

(Dr Amyn Malik is a Fulbright Scholar pursuing MPH at Johns Hopkins Bloomberg School of Public Health who tweets @amynmalik. The above article is reproduced with permission from www. http://tribune.com.pk/) Geoff Marsh: The first player to win the World Cup as both cricketer and coach