In the days bygone, West Indies played England at home in the Caribbean and home away from home in England. The sizable and passionate West Indies cricket fans ensured that their team got strong vocal support.

Michael Clarke and David Warner’s tweet appealing to the Australian cricket fans is a possible hint of nervousness in the Australian cam, says H Natarajan, who says the vocal support of the Indian fan will be a factor in the semifinals at the SCG.

In the days bygone, West Indies played England at home in the Caribbean and home away from home in England. The sizable and passionate West Indies cricket fans ensured that their team got strong vocal support. And it was natural that the English did not like the fact that West Indians came over to work in England but showed allegiance to their original roots.

The demographics have since changed dramatically. A rapidly-changing India has seen hordes of Indian settling down all over the world, but especially in England, Australia and New Zealand. One just need to see videos of matches 15 years ago in Australia, New Zealand and England and compare the dominating presence of Indians in these countries when India play the home team.  Unlike the West Indian fans of the 70s and earlier who were large in a particular section of the ground, the modern Indian fan is omnipresent; he has the money to buy the best tickets in the house. And the fans are not just restricted to those who left India in search of furthering their career overseas; thousands of fans also save their leave and money to go overseas to support their team. Even when India plays in the West Indies, Indian-Americans flock to the island nations to cheer their motherland.

Players of visiting team will tell you how unnerving it can be to play in front of packed stadiums in India — a West Indian player, during the Hero Cup, said that there were more people in the Eden Garden than in his country, one of the smaller islands in the Caribbean. But thanks to an exploding Indian population loaded with money and passion for the game, the home advantage of nations like England, Australia and New Zealand have become a thing of the past.  In the pre-social media era, English players could only quietly moan the strong West Indian presence in their own country rooting for the West Indians. But in today’s social media era, players have humungous following, and reach their fans directly when they want to make an appeal.

Michael Clarke is understandably concerned at the Indian fans will give to their team when Australia take MS Dhoni’s men in the 2015 World Cup semifinals on Thursday.  The Australian captain took to Twitter to exhort his countrymen: “I call on all Australian cricket lovers to paint the SCG gold on Thursday. We need your support. #goldout”

I call on all Australian cricket lovers to paint the SCG gold on Thursday. We need your support. #goldout

I dare say that the vast majority of his 1.19 Twitter followers will be Indians! So, the impact of his appeal would be minimal. Clarke probably gave an indication of the trepidation ahead of the game against India as fans will have a huge role to play, especially in a game as tense as the World Cup semis. He followed up his above tweet with another “Bring your flags, shirts, hats. #goldout.” Earlier, David Warner also appealed to the Australian fan with the goldout hastag:

I call on all Australian cricket lovers to paint the SCG gold on Thursday. We need your support. #goldout

My guess is that Indians would have pounced on the tickets  for the semifinals as soon it was made available to the public. The only way the Aussies could have lessened the impact of the Indians would have been to ensure that far more tickets went to the Australian fans.  In any case, unlike the relatively quiet Australian fans, Indian cricket fans are raucous. Their decibel level would drown any attempt by the Australian fans to support their team. The noise pollution around the Sydney Cricket Ground during the match will be at its highest — no doubting that!

Team India, on the other hand, need not even bother to appeal to their fans! Between Virat Kohli’s 5.9 million followers on Twitter and Dhoni’s 3.7 million on the same social media platform, they have close to 10 million followers. And this is on Twitter alone. Imagine what will happen if the Indian team — and almost all member of side have massive following on social media—  were to make the kind of appeal that Clarke did or make an appeal to counter the Australian fan! Scary! In fact, the appeals by Clarke and Warner would have already fired up the Indian cricket fan.

Michael Clarke has a huge challenge ahead: an Indian juggernaut that has mercilessly crushed every opposition in its path in this World Cup and frenzied backing by the overwhelming at the SCG. 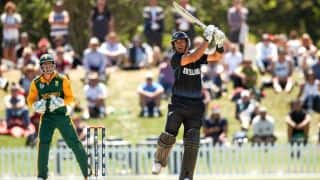